You want to display different datasets on the same chart using different styles.

Set the chart style for each data series individually. First, right-click on the desired series and then select Chart Type from the pop-up menu to display the Chart Type dialog box (see Figure 4-2 in Recipe 4.1). Now select the type of chart you'd like to apply to that series.

In Recipe 4.7 you saw how easy it is to change the type of chart for an existing chart. Sometimes, instead of changing the chart type for the entire chart, it's more desirable to change the type for individual series on a chart, resulting in a combination chart.

Take a look at Figure 4-20, for example. This provides a picture of student grade statistics for a college course over a five-year period. The series representing the mean of grades is a Line chart with error bars representing the standard error (see Chapter 5 for recipes on generating descriptive statistics). 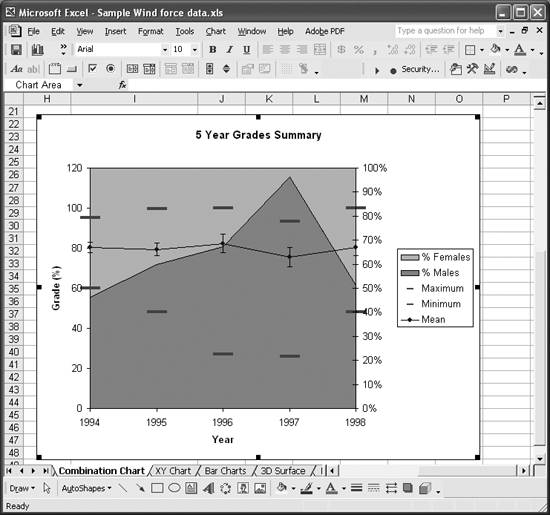 The series representing the minimum and maximum grades (the range for each year) are also Line charts.

The other two series, Females and Males, represent the relative population of males and females in each class for the given year. Both of these are Area charts. I could have made these Line charts like the others, but thought that making them Area charts as a sort of backdrop would be more effective.

This chart was created with all the data series initially in Line chart type. I then selected each of the Female and Male series and changed their type, as described earlier.