Before getting into the design and implementation of SSL remote access VPNs, it is a very good idea to take a look at the underlying mechanisms that allow their operation. This section examines the protocols and mechanisms are used to enable SSL remote accessVPNs.

The Secure Sockets Layer (SSL) is a security protocol that is used to secure e-commerce, web transactions, and more recently, to provide remote access VPN connectivity.

SSL was invented by Netscape Communications, and there are a number of versions:

In this chapter, the term SSL is used as a generic term to describe SSLv3 and TLS.

SSL Overview: TCP, the Record Layer, and the Handshake Protocol

SSL sits on top of a reliable protocol, such as TCP. Application data can then be carried on top of SSL. 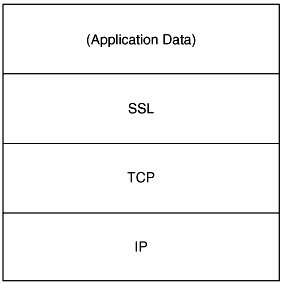 The SSL protocol itself consists of the record protocol plus the handshake protocol, the alert protocol, the change cipher spec protocol, and the application data protocol.

Figure 10-3 shows the relationship between the record protocol and the handshake, alert, change cipher spec, and application data protocols. 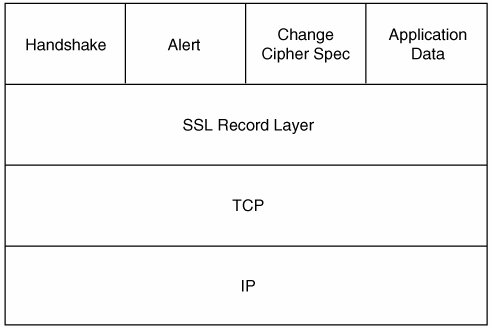 The Record layer (protocol) has a number of functions, including the following:

As shown in Figure 10-3, the handshake, alert, change cipher spec, and application data protocols sit on top of the Record layer. These protocols have the following functions:

As previously described, the function of SSL is to negotiate cryptographic algorithms, authenticate the server (VPN gateway) and optionally the remote access VPN client, and establish cryptographic keys.

Figure 10-4 illustrates the RSA handshake with VPN gateway only authentication. 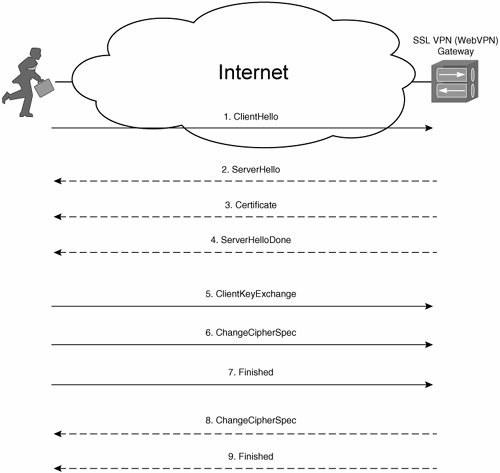 As shown in Figure 10-4, the RSA handshake with VPN gateway only authentication consists of the exchange of nine messages:

Now that you know what happens in theory, it is time to take a look at an SSL connection in practice.

Figure 10-5 shows a packet capture of an SSL ClientHello message. 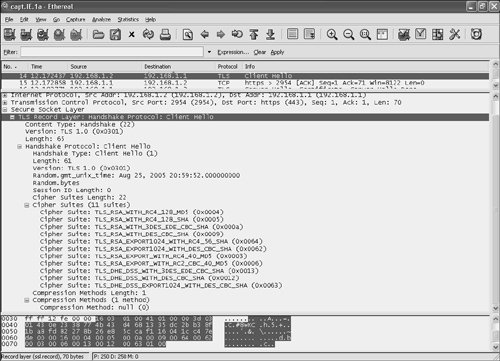 The next messages in the SSL handshake sequence are ServerHello, Certificate, and ServerHelloDone. The VPN gateway sends these messages (see Figure 10-6). 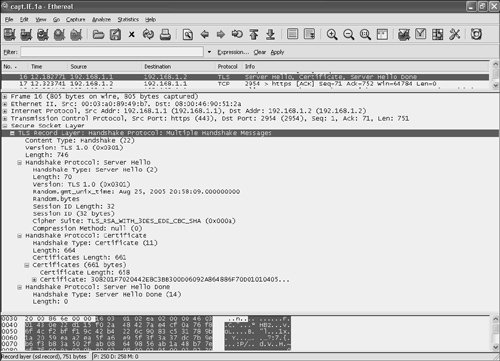 If you take a look in the main portion of Figure 10-6, you can see the common SSL record header (Content Type, Version, Length), followed by the ServerHello, Certificate, and ServerHelloDone messages.

The ServerHello message is similar to the ClientHello message, but there are one or two differences:

Next is the ServerHelloDone message. As you can see, it consists of only two fields:

After the VPN gateway sends the ServerHello, Certificate, and ServerHelloDone messages, the client responds with the ClientKeyExchange, ChangeCipherSpec, and Finished messages.

Figure 10-7 shows the transmission of the ClientKeyExchange, ChangeCipherSpec, and Finished messages. The Finished message is the first in the handshake to be encrypted. 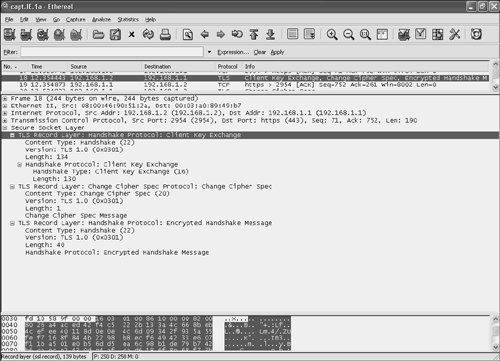 Figure 10-8 shows the ChangeCipherSpec message sent by the client. 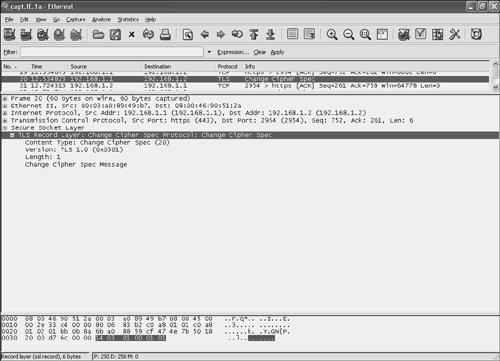 Figure 10-9 shows the Finished message sent by the client. 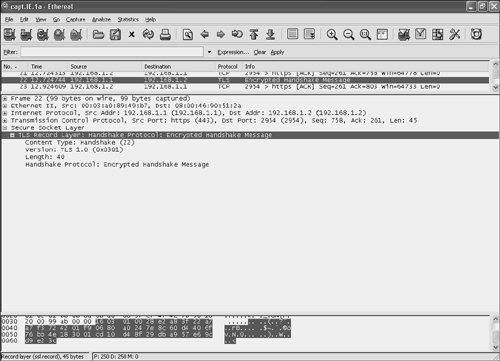 The format of the Record layer header has already been described, and so will not be described again here. Notice, however, the final line in the output in the main portion of the screen shown in Figure 10-9this line shows that the Handshake message is encrypted. This should be no surprise, as you will remember that the Finished message is, in fact, the first message that is encrypted in the handshake. 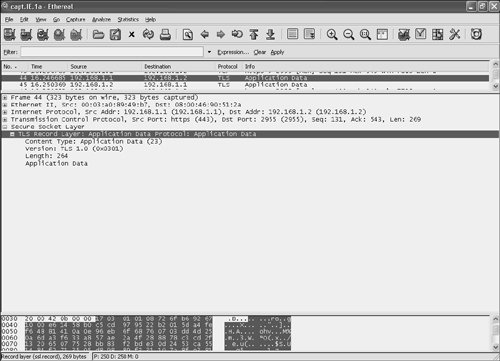 The Record layer header Content Type field shows that this is an Application Data message. The length of the message is 264 bytes, but the payload is encrypted and so is not shown.

Before finishing this section, it is worth pointing one apparent anomaly that is sometimes seen in the SSL handshake (see Figure 10-11). 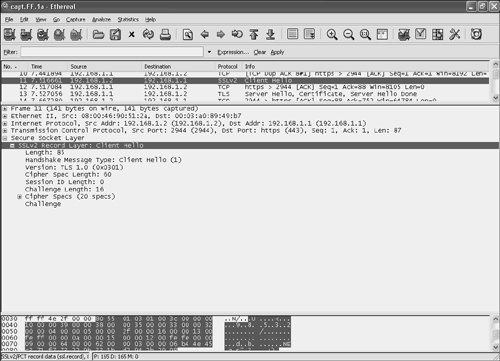 First, take a look at the upper portion of the screen capture. Look at the SSL messages; you will notice the familiar beginning of the RSA handshake (compare with Figure 10-4). If you are the observant type, you will have noticed one apparent anomalythe TLS handshake begins with an SSLv2 ClientHello message!

Now take a look at the lower portion of the screen and you see the detail of the SSLv2 ClientHello. If you look closely at the fields of the Record header, you will notice that although this is an SSLv2 ClientHello, the Version field in the record header specifies TLS!

What is going on? Well, this is a common method that web browsers/clients use to check whether a server/VPN gateway can support SSLv3 or TLS. This method of checking support for SSLv3 or TLS works because the Version fields in SSLv2 and SSLv3/TLS are interpreted differently (SSLv2 is represented as 0x0002, whereas SSLv3 and TLS are represented as 0x0300 and 0x0301 respectivelynote the difference in the way the high-order and low-order octets are used).

So, if a client sends an SSLv2 ClientHello with the Version field set to TLS (0x0301), and the server/VPN gateway supports TLS, it will parse the SSLv3/TLS version field and identify support for TLS, then respond using TLS handshake messages, as appropriate! A server/VPN gateway that supports only SSLv2, on the other hand, will not identify this as TLS.

SSLv3 and TLS (RFC2246) also include a variation on the regular RSA handshake called an ephemeral RSA1, as well as another type of handshake that takes advantage of the Digital Signature Standard (DSS) and Diffie-Hellman algorithms.

The DSS/DH handshake, on the other hand, was designed to overcome any issues with patents on the RSA algorithm.

The RSA handshake described in the previous section ensures that the server/VPN gateway is authenticated by the client (using the certificate sent by the server in the Certificate message). But, how about if you want the server to authenticate client during the handshake, too? In this case, the SSL handshake with client authentication, illustrated in Figure 10-12, is used. 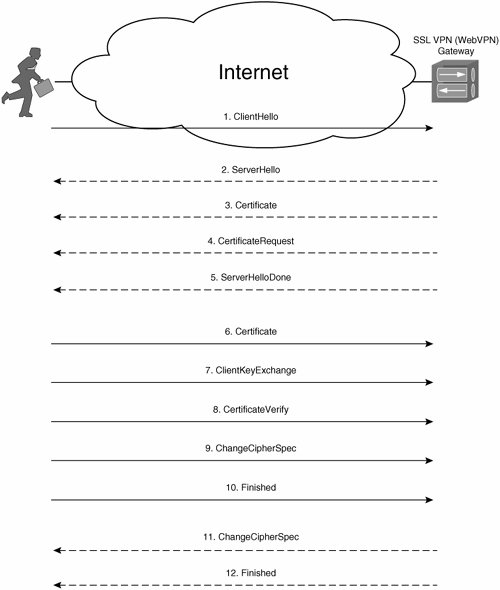 If you compare Figure 10-12 with Figure 10-4, you can see that the handshakes are very similar. There are one or two differences, however: 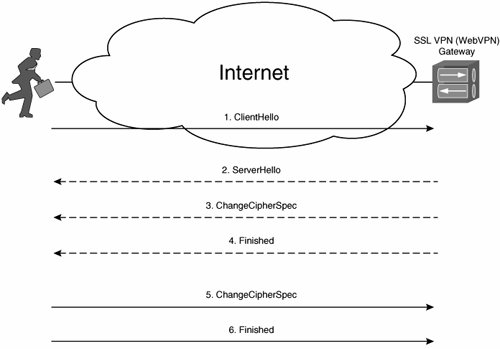 You might be wondering why you would want to resume an SSL session instead of just establishing a new one (as described in the previous two sections). The answer is that the public key operations that are necessary when establishing a new session are cryptographically expensive/processor intensive, whereas resuming a previous session does not require these expensive public key operations.

As you can see in Figure 10-13, to resume an SSL session, the follows happens:

The final action in an SSL connection is its closure. This is illustrated in Figure 10-14. 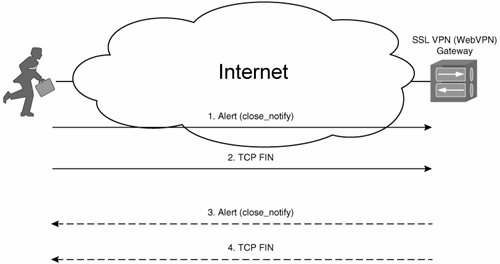 In Figure 10-14, the client initiates connection closure by sending a close_notify Alert message to the VPN gateway. The client then sends a TCP FIN message to terminate the underlying TCP connection.

The VPN gateway responds by sending its own close_notify Alert message, followed by a TCP FIN. The SSL connection is now closed.

Note that if a client or VPN gateway receives a TCP FIN before receiving a close_notify Alert, it marks the connection as being unresumablethis prevents truncation attacks, where an attacker inserts a TCP FIN into the traffic stream between the client and VPN gateway.