When deploying AToM, it is essential to understand how pseudowires are set up, and how frames, cells, or SDUs received on attachment circuits are transported over pseudowires.

There are two channels, or planes, of communication for AToM pseudowires:

As shown in Figure 3-2, an LDP message consists of the following elements:

Figure 3-3 shows the format of the LDP header.

- PDU Length This is the length of the PDU, with the exception of the Version and PDU Length fields.

- LDP Identifier This field functions as a unique identifier of the label space of a Label Switching Router (LSR)/Provider Edge (PE) router. A label space is a pool of labels, and this pool can either be used for a particular interface or for a platform as a whole.

The LDP message format has the following fields:

Now that you are familiar with the overall LDP message format, it is time to take a look at AToM pseudowire setup, maintenance, and teardown.

As previously mentioned, AToM uses LDP to set up, maintain, and tear down pseudowires.

As you can see in Figure 3-5, AToM pseudowire setup consists of three steps:

LDP discovery can be performed in two different ways:

In the case of LDP discovery between AToM PE routers, extended discovery is used because the peers are typically not directly connected.

In Example 3-1, you can see LDP extended discovery between peer Cisco PE routers.

In highlighted lines 1 and 2, you can see that targeted LDP Hellos have been exchanged between the local PE router (10.1.1.2) and the remote PE router (10.1.1.1). This exchange of targeted Hellos is the basis of LDP extended discovery. Note that detailed, step-by-step information on verifying and troubleshooting AToM-based L2VPNs can be found in Troubleshooting Virtual Private Networks by Mark Lewis (Cisco Press).

After the PE routers are aware of each other, they can establish a transport connection and begin LDP session initialization.

You can use show mpls ldp neighbor neighbor-ip-address detail to examine LDP session information on Cisco PE routers, as demonstrated in Example 3-2.

Highlighted line 2 shows that the LDP session has been established over a TCP connection. The TCP ports that the remote and local PE routers have opened for this TCP connection are 646 and 11008.

Highlighted lines 3 and 4 shows the LDP session state (operational [established]), the number of messages sent and received (18 and 19), the method of label distribution (unsolicited downstream), and the session uptime (7 minutes, 10 seconds).

The next step is for the PE routers to exchange LDP Label Mapping messages. These messages contain the pseudowire label bindings consisting of a FEC Type-Length-Value (TLV) and a Generic Label TLV (plus zero or more optional TLVs).

Note that after LDP discovery and session initialization have taken place between peer PE routers, any number of pseudowires can be set up by exchanging LDP Label Mapping messages.

It is a good idea to take a closer look at the exchange of LDP Label Mapping messages during AToM pseudowire setup. Remember that these messages contain FEC and Generic Label TLVs.

As shown in Figure 3-6, contents of the fields in the FEC TLV are as follows:

Note that the format of the FEC TLV (U and F bits; Type, Length, and Value fields) is common to all LDP TLVs.

The Generic Label TLV can be described as follows:

The PW ID FEC element consists of the following fields:

The components of the Interface Parameters field can be described as follows:

- Parameter ID Identifies the type of interface parameter (interface MTU, description, and so on) contained in the Variable Length Value field.

- Length Specifies the overall length of the Interface Parameters field, including Parameter ID and Length.

If you are a little confused about how all of these TLVs, FEC elements, and Interface Parameters fields fit together, take a look at Figure 3-10. 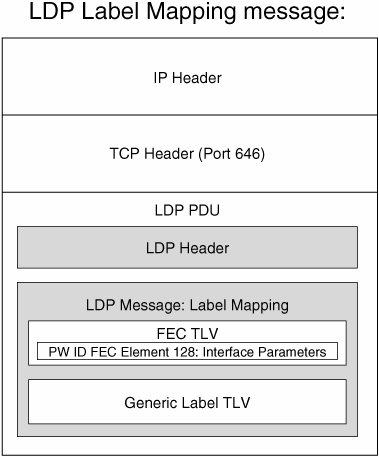 As shown in Figure 3-10, the LDP PDU consists of the following:

Although not shown in Figure 3-10, the Label Mapping message may also contain zero or more optional parameter TLVs.

A closer look at highlighted lines 2 and 3 shows some of the information contained in the PW (VC) ID FEC element (see Figure 3-8), such as the following:

The debug mpls l2transport signaling message command is used here for illustrative purposes only. Exercise caution when using debug commands because they can disrupt the operation of heavily loaded routers.

LDP is not only used to setup pseudowires, it can also be used to signal pseudowire status. This can be important if, for example, one PE router wants to signal its peer PE router that its attachment circuit has changed state.

If a PE router wants to signal attachment circuit status changes to its peer PE router, it can use two different methods:

The LDP Label Withdraw message can be used to signal circuit down status.

This alternative (and relatively recent) method of signaling status must be negotiated when LDP Label Mapping messages are exchanged during pseudowire setup (see Figure 3-5).

If the PE router initiating pseudowire setup supports status signaling using the LDP Notification message, it includes a PW Status TLV along with the FEC and Generic Label TLVs in the LDP Label Mapping message.

Table 3-3 shows possible PW status codes that can be carried in the PW Status TLV in the LDP Notification message.

In Figure 3-13, both peer PE routers include the PW Status TLV in the LDP Label Mapping messages that they send, and this results in the PE routers using the LDP Notification message to signal pseudowire status.

The overall format of AToM data channel packets is shown in Figure 3-2 on page 139. As you can see, the packet format consists of the following:

The PW label and the presence (or otherwise) of a control word are advertised in LDP Label Mapping messages exchanged during pseudowire setup. 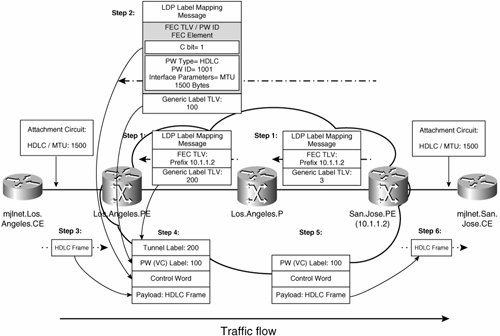 If you take a close look at Figure 3-15, you can see that the following events occur:

Now that you understand the background to AToM pseudowire operation, it is time to move on to AToM configuration.