The purpose of IKE negotiation is to negotiate cryptographic parameters and algorithms, exchange keying material, and authenticate IPsec peer devices. When using IKE in an IPsec remote access VPN environment, however, a number of additional challenges must be addressed.

This section specifically discusses some of the challenges when using IKEv1 in a remote access VPN environment. The new IKEv2 specification is designed to address many of these issues, and at the time of this writing, Cisco has stated that it will begin to integrate IKEv2 in its products in forthcoming software versions.

The main issues and shortcomings relating to IKEv1 to address in an IPsec remote access VPN environment are as follows:

The resolution of these challenges is discussed in the sections that follow. But, before examining these issues, it is worth taking a brief look at the IKE (ISAKMP) message format. 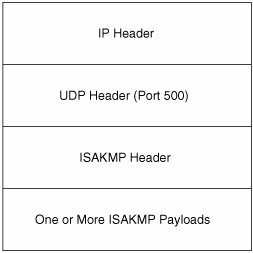 As shown in Figure 9-2, the overall ISAKMP message format consists of the following:

The ISAKMP header fields are as follows:

As mentioned earlier, each ISAKMP message consists of the ISAKMP message header, together with one or more payloads. Each of these payloads is prefixed by a generic payload header (see Figure 9-4).

The fields in the ISAKMP generic payload header format are as follows:

Now that you have an understanding of the ISAKMP message format, it is time to take a look at issues relating to IKEv1 in a remote access VPN environment.

IKEv1 phase 1 exchanges allow IPsec devices to authenticate each other but do not include any mechanism by which remote access VPN users may be authenticated.

There are three main methods by which a VPN gateway may authenticate remote access VPN users:

These methods of remote access VPN user authentication are discussed in the following three sections.

At this point, it is important to note that although RSA or DSA digital signature authentication is used to authenticate the VPN gateway during IKEv1 phase 1, it is not necessary to deploy a full PKI. VPN gateways, but not VPN clients, need to enroll with CA servers and obtain identity certificates.

IKE CRACK consists of a modified IKE phase 1 negotiation that includes user authentication (something not included in standard IKEv1 phase 1).

As with Hybrid Authentication, CRACK does not require the deployment of a full PKI.

CRACK is supported only on the Cisco VPN 3000 concentrator beginning in software release 4.7 for use in conjunction with the VPN client on the Nokia 92xx Communicator series phones. At the time of this writing, CRACK is not supported on Cisco IOS routers, the ASA 5500, or by the Cisco VPN Client.