As previously mentioned, a VPLS is a multipoint emulated LAN service provisioned over a MAN or WAN. A VPLS is an Ethernet broadcast domain, and is fully capable of forwarding Ethernet traffic based on learned MAC addresses. 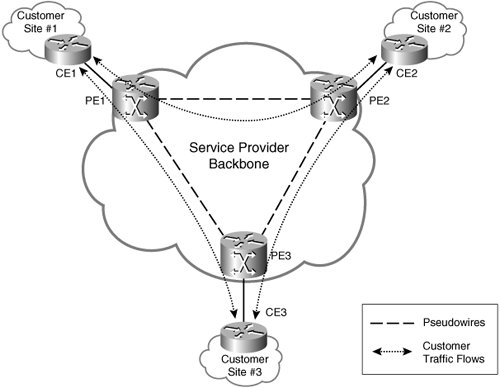 The VPLS in Figure A-1 appears to the customer as a single broadcast domain, as shown in Figure A-2.

Figure A-2. A VPLS Is a Single-Broadcast Domain 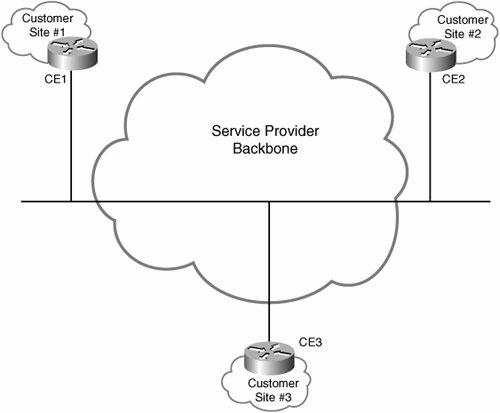 Although a single VPLS is illustrated in Figure A-1, PE devices can support multiple separate VPLS (customer broadcast domains).

A VPLS can provide the following connectivity models:

The VPLS in Figure A-1 provides connectivity between CE routers.

A VPLS provides the usual connectivity that would be expected in a LAN segment, including forwarding of unicast traffic, multicast traffic, and broadcast traffic.

Each PE device operates in a similar manner to an Ethernet switch and is capable of dynamically learning (and aging) MAC addresses and forwarding traffic based on those learned MAC addresses. Pseudowires between PE devices are treated as logical ports, and so a PE device will forward Ethernet traffic between attachment circuits (connected to CE routers/switches) and pseudowires (connected to other PE devices) in a similar manner to that which a regular Ethernet switch uses to forward traffic between ports.

Forwarding of multicast traffic can be optimized in a VPLS by utilizing mechanisms such as Internet Group Multicast Protocol (IGMP) and Protocol Independent Multicast (PIM) snooping on PE devices.

Ensuring a Loop-Free Topology in a VPLS

The PEs in a VPLS can have a full mesh of pseudowires between themselves (see Figure A-1). As previously mentioned, these pseudowires function as logical ports as far as the learning of MAC addresses and forwarding of Ethernet traffic is concerned.

If a full mesh of pseudowires is maintained between PEs, the Spanning Tree Protocol (STP) is not required on the PEs. In this case, the PEs perform split-horizon forwardingEthernet traffic received on one pseudowire from one PE is not forwarded on another pseudowire to another PE.

Figure A-3 illustrates split-horizon forwarding in a VPLS.

Figure A-3. Split-Horizon Forwarding in a VPLS 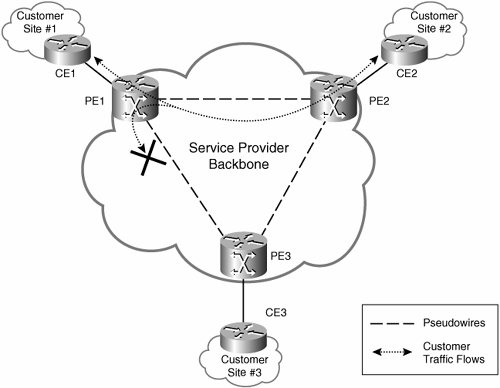 As you can see in Figure A-3, Ethernet traffic received by PE1 from PE2 is not then sent over the pseudowire to PE3.

Customers may still run STP to prevent loops if they maintain "backdoor" connections (connections not via the VPLS) between sites. In this case, Bridge Protocol Data Units (BPDU) are tunneled over the service provider network without being examined (and acted upon) by PE devices.

Figure A-4 illustrates a backdoor connection between customer sites and the corresponding STP configuration. 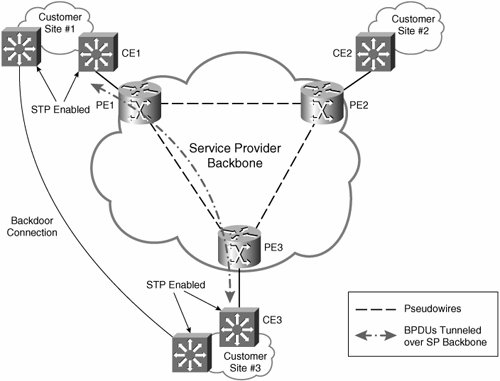 Frame Forwarding over a VPLS

Ethernet frames are sent over pseudowires between PEs in a VPLS as described in Chapter 3.

Although Figure A-1 shows CE devices connected to dedicated ports on PE devices, it is possible that more than one CE device (different customers) might be connected to a single physical port on a PE device. In this case, an identifier such as a VLAN tag may be used to separate traffic for different customer VPLSs on that port.

When a PE receives an Ethernet frame from a customer, any identifiers on Ethernet frames (such as a VLAN tag) used to identify a particular VPLS are removed before the frame is forwarded over a pseudowire to another PE. The egress PE may prepend an identifier back onto the frame before forwarding the frame.

If a PE receives an Ethernet frame from a customer with an identifier that does not identify a VPLS (for example, when VLAN tagging is used by a customer, and this tagging is not used by the PE device to distinguish between VPLSs), this identifier is not removed before the frame is forwarded over a pseudowire to another PE.

There are two methods of MAC address learning used in a VPLS:

When using unqualified learning, a single VPLS handles all the VLANs belonging to a customer. In this case, there must be no overlap between MAC addresses among customer VLANs (there is a single MAC address space). If an overlap occurs, traffic might be forwarded incorrectly.

Unqualified learning can be used when connectivity to a customer is on a nonmultiplexed port (there is only one customer per physical port), and the customer might be forwarding traffic for multiple VLANs on the physical port.

To improve the scalability of VPLS deployments, a hierarchical architecture may be used (see Figure A-5). In Figure A-5, an additional level of hierarchy has been added to the basic VPLS architecture (compare to Figure A-1). The functionality of the PE device can now be divided between Network-facing PEs (N-PEs/PE-rs [routing- and bridging-capable PEs]) and User (customer)-facing PEs (U-PEs) or MTU-s (multitenant unit bridging-capable devices). 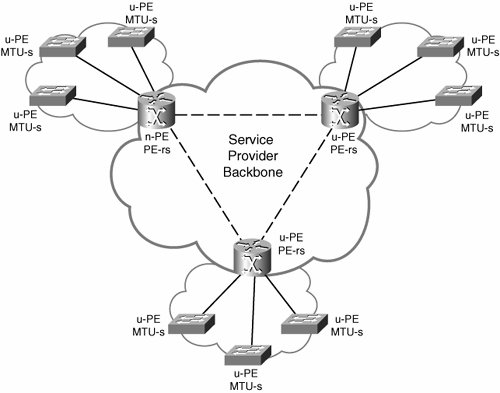 In a hierarchical VPLS architecture, a full mesh of pseudowires can be maintained between N-PEs/PE-rs, and connectivity between U-PEs/MTU-s is provided via either pseudowires or Q-in-Q (802.1Q in 802.1Q) encapsulation. Pseudowires between PE-rs and MTU-s terminate in virtual switch instances (VSI; called virtual forwarding instances [VFI] in Cisco terminology).