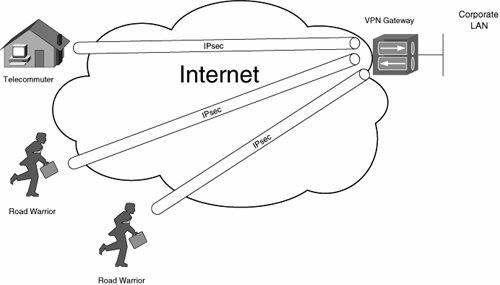 IPsec remote access VPNs can be deployed in two ways:

It is worth noting that an IPsec remote access VPN deployment can make use of both software and hardware clients to establish VPN connections, depending on the particular requirements of remote access users.

This chapter discusses the design and configuration of IPsec remote access VPNs using both software and hardware clients.

If you do not already have a good understanding of the operation of IPsec, it may be a good idea to read Chapter 6, "Deploying Site-to-Site IPsec VPNs," prior to reading this chapter.

Database Modeling with MicrosoftВ® Visio for Enterprise Architects (The Morgan Kaufmann Series in Data Management Systems)
Documenting Software Architectures: Views and Beyond
C++ GUI Programming with Qt 3
PostgreSQL(c) The comprehensive guide to building, programming, and administering PostgreSQL databases
Persuasive Technology: Using Computers to Change What We Think and Do (Interactive Technologies)
Lean Six Sigma for Service : How to Use Lean Speed and Six Sigma Quality to Improve Services and Transactions
FileMaker 8 Functions and Scripts Desk Reference
Flylib.com © 2008-2017.
If you may any questions please contact us: flylib@qtcs.net
Privacy policy
This website uses cookies. Click here to find out more.
Accept cookies