When using ATM connectivity between devices, MPLS applies to cells, not frames. Cells are used to transport data plane information. When ATM labels are used in an MPLS core, the operating mode of MPLS is called cell-mode MPLS. As previously mentioned, peering between LSRs via routed ATM PVCs can also be implemented but is considered a frame-mode implementation.

In cell-mode MPLS, the label used in the MPLS domain is the same format as the regular MPLS label, as shown earlier in Figure 1-6. To ensure that cells are forwarded using MPLS, the VPI/VCI values forward the labeled cells. This label is inserted between the ATM header and the IP header in the cells that are forwarded to the ATM LSR, as shown in Figure 1-17.

Figure 1-18 shows a cell-mode MPLS network with an ingress edge ATM LSR, a core ATM LSR, and an egress edge ATM LSR. The interfaces of the LSRs in the MPLS domain that carry pure cells are called Label Switching controlled-ATM interfaces (LC-ATM) as the VPI/VCI pairs for the virtual circuits are used by the protocol for distribution and exchange of labels in the ATM domain. ATM-LSR is an ATM switch that runs MPLS on the control plane and performs MPLS forwarding between LC-ATM interfaces on the data plane by means of traditional ATM cell switching. In the integrated ATM LSR implementation, the LC-ATM interfaces carry both the data plane packets as well as the control plane packets (on VC 0/32). If an ATM switch is connected to an external LSC together functioning as the ATM LSR, the Edge ATM LSRs form a control plane adjacency with the LSC, and the LSC identifies the data plane forwarding (ingress labels to egress label mappings) on the LSC-ATM interfaces of the ATM switch in the ATM LSR.

As portrayed in Figure 1-18, a control plane adjacency is required between adjoining ATM switches or LSRs in the ATM domain for IGP and label distribution protocol packet exchange. To ensure appropriate forwarding of IP routing information through an ATM switch, all the ATM LSRs and ATM Edge LSRs form an IP adjacency by creating an in-band VC that is used only for control information. The VPI/VCI used for this control VC is 0/32 (default) and needs to be configured on all ATM switches and ATM Edge LSRs in the MPLS ATM domain. Therefore, the MPLS control VC is configured by default on all switches to be with VC 0/32 and uses the aal5snap encapsulation as defined in RFC 2684. The control VC can be changed from the default value of 0/32 on an ATM LSR; however, for proper information exchange and adjacency formation between two ATM LSRs, the control VC must be configured as the same.

To enable MPLS in the ATM domain, the top label in the label stack that is inserted between the ATM header and IP header is encoded as the VPI/VCI of the virtual circuit in use. The mechanism allows for the proper forwarding of data plane packets; control plane packets are exchanged on a control VC between directly connected ATM LSRs.

The process of label allocation and distribution is the same as frame-mode MPLS in cell-mode MPLS operation. The downstream ATM Edge LSR R1 allocates a local label for network 172.16.10.0 and propagates the same upstream. This process is repeated on the ATM LSRs A1 and A2. The only difference between cell-mode and frame-mode MPLS are that no penultimate hop popping occurs at the penultimate hop ATM LSR, and the labels assigned are the VPI/VCI values copied from the ATM header. In addition to the previously mentioned differences, cell-mode MPLS uses an interface level label space versus frame mode that can either use an interface level or router level label space.

Data plane operation in the cell-mode MPLS network is as follows:

The data plane forwarding operation in cell-mode MPLS is depicted in Figure 1-20.

In cell-mode MPLS, the ATM header does not posses a TTL field such as in the IP header or in a label when implementing frame-mode MPLS to enable loop detection by the use of TTL values in the header. The label distribution protocol used in the control plane for label allocation and distribution relies on the Layer 3 protocols to primarily perform the functions of loop detection.

The U bit or the unknown TLV bit if set (=1) is ignored and the rest of the message is processed. If the U bit is unset (=0), the message is ignored, and a notification (error report) is sent to the source.

Type identifies how the value field is to be interpreted. In the cell-mode MPLS implementation, the type field can identify a hop-count or a path vector for loop detection.

Length identifies the length of the value field in octets.

Value is an octet string defining the value for the type field.

In cell-mode MPLS loop detection, the first TLV that is used is called the hop count TLV, which is propagated during label distribution along with the specific destination prefix. The hop count TLV format and implementation is depicted in Figure 1-22.

Virtual circuit merge (VC-merge) is the most common methodology employed in cell-mode MPLS that enables a fewer number of labels to be maintained per LSR. In VC-merge, an LSR maintains labels per destination and uses the same outgoing label for the same destination from different upstream LSRs. Figure 1-24 depicts the network in Figure 1-19 with an additional Edge ATM LSR R3 connected to ATM LSR A2. Without VC-merge enabled, A2 allocates two separate labels for the destination 172.16.1.0/24 and propagates them upstream to Edge ATM LSRs R2 and R3. R2 receives a next-hop label of 1/L3 and R3 receives a next-hop label of 1/L5 for the same destination.

However, with VC-merge enabled, Edge ATM LSRs R2 and R3 both receive the same label of 1/L3 as the next-hop label mapping to destination 172.16.1.0, which provides label space savings on the ATM LSRs, as shown in Figure 1-25.

Because the VC values are the same for all the cells, although the traffic is from two different sources, the downstream LSRs are incapable of identifying the correct source of the traffic. As shown in Figure 1-26, the ATM LSR A2 connected to multiple Edge LSRs R2 and R3 (as depicted in Figure 1-25) need to send a request for labels mapping to the same destination downstream and need to maintain multiple labels for each Edge LSR connected to the switch for each destination prefix. 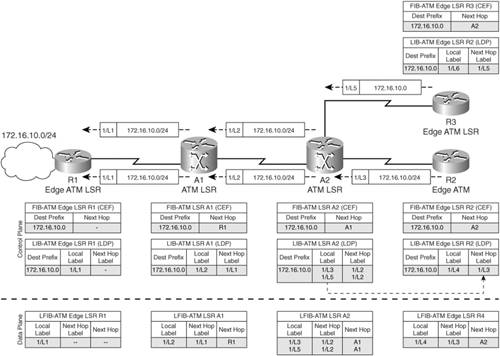 In some cases, the ATM switch is capable of buffering cells from a single source to a particular destination when traffic from another source to the same destination is transmitted downstream. The ATM switches buffer packets until they receive a cell with the end of frame bit set. The cells in the buffer are transmitted only if no traffic using the same VC to the destination is currently in transit from the ATM switch. Therefore, in this case, VC-merge is fully functional but introduces delays in transit as multiple sources are unable to send traffic to the same destination.

In the absence of buffering capabilities, the ATM LSR needs to have VC-merge disabled to avoid cell interleaving and associated issues.