Multicast VPN or an MPLS VPN capable of supporting multicast packet forwarding does not use MPLS forwarding or a control mechanism but uses MPLS VPN architecture and its associated Multicast Border Gateway Protocol (MBGP) route distribution process. This architecture requires that multicast routing be enabled in the SP core network. The multicast VPN solution provides a reduction in the amount of state information while retaining optimal routing. It maps all the particular VPN multicast groups to a single unique group called the Default Multicast Distribution Tree (Default MDT) in the provider network.

Control and low bandwidth data traffic flows through the default MDT. The solution allows the creation of additional distribution groups called Data Multicast Distribution Trees (Data MDTs) in the SP network to transport high bandwidth sources to points in the network that are signaled to receive traffic. This solution includes the support of multicast routing and forwarding in the context of VPN Routing and Forwarding (VRF) and the use of multicast tunnels over the provider network for control and data connectivity.

Routers in the customer sites that will be a part of the multicast tree will have to be enabled for multicast forwarding on the appropriate interfaces. The provider edge (PE) routers maintain PIM adjacency with the CE routers. The customer can run any multicast routing protocol (SSM or PIM) independent of the multicast protocol running in the provider network. PE routers build a per-VRF default MDT that will be used to distribute data packets and control messages for low bandwidth traffic.

The operation of a multicast MPLS VPN is as follows:

MDT group addresses are defined by the provider and are unrelated to the groups used by the customer. Access to the MDT is via a multicast tunnel interface on PE routers where the PE router always functions as the root of the MDT if it is connected to the CE router containing the multicast source.

As shown in Figure 14-1, Site 1 sources multicast packets for GroupA and GroupB where GroupA is a low bandwidth source and GroupB is a high bandwidth source. Sites 2 and 3 belonging to Customer A, as well as PE Routers PE2-AS1 and PE3-AS1, receive traffic destined for both groups. As shown in Figure 14-1, the default MDT is formed between all PE routers, and the data MDT is formed only with PE routers connected to sources/receivers of high bandwidth traffic.

Configuration to enable multicast support for MPLS VPN is shown in Figure 14-2. The configurations involve enabling multicast as well as a multicast protocol on the interfaces in the customer domain, as well as the provider domain, to forward multicast packets. In addition, the VRF mapping to the customer is enabled for multicast routing using the ip multicast-routing vrf command, and the default and data MDTs are configured under the VRF definition. 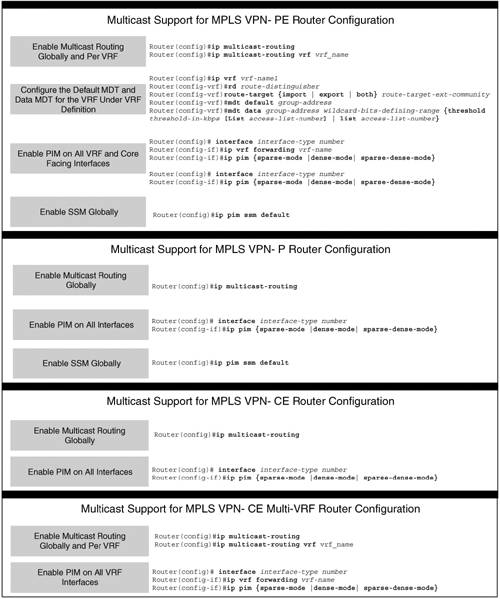 Figure 14-3 shows a SP network providing MPLS VPN services to Customer A sites. Customer A, after prior deployment of intersite connectivity using MPLS VPN, would like to also have support for multicast traffic propagation to other sites with receivers that are members of a multicast group.

The additional complete configurations on the devices to enable multicast support for MPLS VPN are shown in Figure 14-4. Configurations for PE3-AS1 and PE4-AS1 have not been depicted for brevity and can be derived using the same process as the depicted PE router configurations. As illustrated, the default MDT is configured with a group address of 232.10.0.1, and the data MDT is configured with a group address range of 232.0.0.1 to 232.0.0.255.

Figure 14-5 shows the verification for the implementation of multicast support for MPLS VPN by performing a show ip mroute on the appropriate devices. As shown in Figure 14-5, the multicast states are propagated via the MP-BGP backbone to CE2-A for the group 232.10.1.1 due to a receiver being connected in Customer A Site 2 for the group. 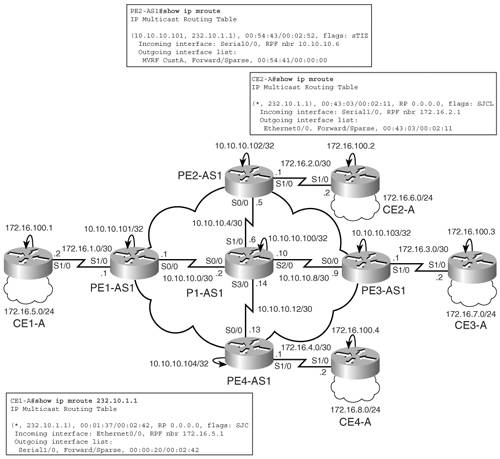