MPLS TE Class-Based Tunnel Selection (CBTS) enables the SP to dynamically route and forward traffic of different classes of service (CoS) into different TE tunnels between the same tunnel headend and the same tailend where the tunnels can be DS-TE aware. The set of TE (or DS-TE) tunnels from same headend to same tailend that are configured to carry different CoS values is referred to as a "tunnel bundle." After configuration, CBTS dynamically routes and forwards packets into the tunnel that is configured to carry the CoS of the packets.

Figure 14-39. Case Study 6: Base Configuration Prior to CBTS Implementation

Verification of CBTS is shown in Figure 14-41. Verification of tunnel status by issuing a show MPLS traffic-eng tunnels brief on PE1-AS1 is shown along with verification of TE topology and next-hop pointing to all three tunnels and tunnel association into IGP. 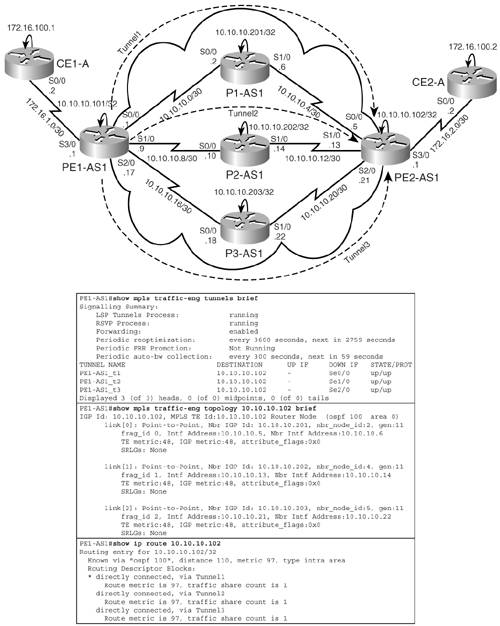 The final configurations for Case Study 6 for the PE Routers PE1-AS1 and PE2-AS1 to implement CBTS are shown in Figure 14-42. For all other device configurations, refer Figure 14-39.