The treeView control displays nodes hierarchically in a tree. Traditionally, nodes are objects that contain values and can refer to other nodes. A parent node contains child nodes, and the child nodes can be parents to other nodes. Two child nodes that have the same parent node are considered sibling nodes. A tree is a collection of nodes, usually organized in a hierarchical manner. The first parent node of a tree is the root node (a treeView can have multiple roots). For example, the file system of a computer can be represented as a tree. The top-level directory (perhaps C:) would be the root, each subfolder of C: would be a child node and each child folder could have its own children. TReeView controls are useful for displaying hierarchal information, such as the file structure that we just mentioned. We cover nodes and trees in greater detail in Chapter 25, Data Structures. Figure 14.24 displays a sample treeView control on a Form.

A parent node can be expanded or collapsed by clicking the plus box or minus box to its left. Nodes without children do not have these boxes.

The nodes in a treeView are instances of class treeNode. Each TReeNode has a Nodes collection (type treeNodeCollection), which contains a list of other treeNodesknown as its children. The Parent property returns a reference to the parent node (or null if the node is a root node). Figure 14.25 and Fig. 14.26 list the common properties of treeViews and TReeNodes, common treeNode methods and a common TReeView event.

To add nodes to the TReeView visually, click the ellipsis next to the Nodes property in the Properties window. This opens the TreeNode Editor (Fig. 14.27), which displays an empty tree representing the treeView. There are Buttons to create a root, and to add or delete a node. To the right are the properties of current node. Here you can rename the node.

(This item is displayed on page 681 in the print version) 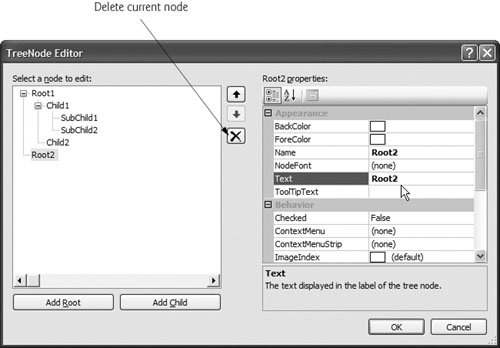 To add nodes programmatically, first create a root node. Create a new TReeNode object and pass it a string to display. Then call method Add to add this new TReeNode to the treeView's Nodes collection. Thus, to add a root node to treeView myTreeView, write

where myTreeView is the TReeView to which we are adding nodes, and rootLabel is the text to display in myTreeView. To add children to a root node, add new TReeNodes to its Nodes collection. We select the appropriate root node from the treeView by writing

where myIndex is the root node's index in myTreeView's Nodes collection. We add nodes to child nodes through the same process by which we added root nodes to myTreeView. To add a child to the root node at index myIndex, write

Class treeViewDirectoryStructureForm (Fig. 14.28) uses a treeView to display the contents of a directory chosen by the user. A TextBox and a Button are used to specify the directory. First, enter the full path of the directory you want to display. Then click the Button to set the specified directory as the root node in the treeView. Each subdirectory of this directory becomes a child node. This layout is similar to that used in Windows Explorer. Folders can be expanded or collapsed by clicking the plus or minus boxes that appear to their left.

When the user clicks the enterButton, all the nodes in directoryTreeView are cleared (line 67). Then the path entered in inputTextBox is used to create the root node. Line 75 adds the directory to directoryTreeView as the root node, and lines 7879 call method PopulateTreeView (lines 1961), which takes a directory (a string) and a parent node. Method PopulateTreeView then creates child nodes corresponding to the subdirectories of the directory it receives as an argument.

If there are accessible subdirectories, lines 4042 use the Substring method to increase readability by shortening the full path name to just the directory name. Next, each string in the directoryArray is used to create a new child node (line 45). We use method Add (line 48) to add each child node to the parent. Then method PopulateTreeView is called recursively on every subdirectory (line 51), which eventually populates the TReeView with the entire directory structure. Note that our recursive algorithm may cause a delay when the program loads large directories. However, once the folder names are added to the appropriate Nodes collection, they can be expanded and collapsed without delay. In the next section, we present an alternate algorithm to solve this problem.