Every thread has a priority in the range between ThreadPriority.Lowest to ThreadPriority.Highest. These values come from the ThreadPriority enumeration (namespace System.Threading), which consists of the values Lowest, BelowNormal, Normal, AboveNormal and Highest. By default, each thread has priority Normal.

The Windows operating system supports a concept, called timeslicing, that enables threads of equal priority to share a processor. Without timeslicing, each thread in a set of equal-priority threads runs to completion (unless the thread leaves the Running state and enters the WaitSleepJoin, Suspended or Blocked state) before the thread's peers get a chance to execute. With timeslicing, each thread receives a brief burst of processor time, called a quantum, during which the thread can execute. At the completion of the quantum, even if the thread has not finished executing, the processor is taken away from that thread and given to the next thread of equal priority, if one is available.

The job of the thread scheduler is to keep the highest-priority thread running at all times and, if there is more than one highest-priority thread, to ensure that all such threads execute for a quantum in round-robin fashion. Figure 15.2 illustrates the multilevel priority queue for threads. In Fig. 15.2, assuming a single-processor computer, threads A and B each execute for a quantum in round-robin fashion until both threads complete execution. This means that A gets a quantum of time to run. Then B gets a quantum. Then A gets another quantum. Then B gets another quantum. This continues until one thread completes. The processor then devotes all its power to the thread that remains (unless another thread of that priority is started). Next, thread C runs to completion. Threads D, E and F each execute for a quantum in round-robin fashion until they all complete execution. This process continues until all threads run to completion. Note that, depending on the operating system, new higher-priority threads could postponepossibly indefinitelythe execution of lower-priority threads. Such indefinite postponement often is referred to more colorfully as starvation. 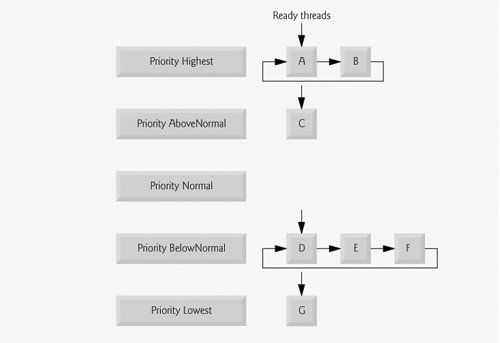 A thread's priority can be adjusted with the Priority property, which accepts values from the ThreadPriority enumeration. If the value specified is not one of the valid thread-priority constants, an ArgumentException occurs.

A thread executes until it dies, becomes Blocked for I/O (or some other reason), calls Sleep, calls Monitor method Wait or Join, is pre-empted by a thread of higher priority or has its quantum expire. A thread with a higher priority than the Running thread can become Running (and hence pre-empt the first Running thread) if a sleeping thread wakes up, if I/O completes for a thread that Blocked for that I/O, if either Pulse or PulseAll is called on an object on which Wait was called, if a thread is Resumed from the Suspended state or if a thread to which the high-priority thread was joined completes.