In previous chapters, we have built only single document interface (SDI) applications. Such programs (including Microsoft's Notepad and Paint) can support only one open window or document at a time. SDI applications usually have limited abilitiesPaint and Notepad, for example, have limited image- and text-editing features. To edit multiple documents, the user must execute another instance of the SDI application.

Most recent applications are multiple document interface (MDI) programs, which allow users to edit multiple documents at once (e.g. Microsoft Office products). MDI programs also tend to be more complexPaintShop Pro and Photoshop have a greater number of image-editing features than does Paint.

The main application window of an MDI program is called the parent window, and each window inside the application is referred to as a child window. Although an MDI application can have many child windows, each has only one parent window. Furthermore, a maximum of one child window can be active at once. Child windows cannot be parents themselves and cannot be moved outside their parent. Otherwise, a child window behaves like any other window (with regard to closing, minimizing, resizing, etc.). A child window's functionality can be different from the functionality of other child windows of the parent. For example, one child window might allow the user to edit images, another might allow the user to edit text and a third might display network traffic graphically, but all could belong to the same MDI parent. Figure 14.37 depicts a sample MDI application.

(This item is displayed on page 696 in the print version) 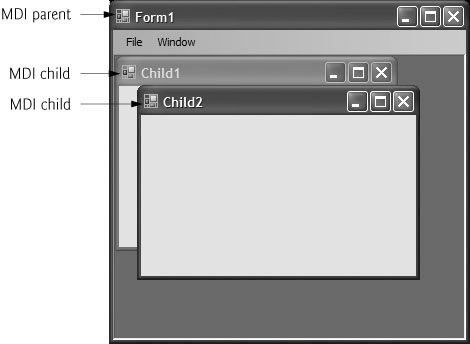 To create an MDI Form, create a new Form and set its IsMdiContainer property to TRue. The Form changes appearance, as in Fig. 14.38.

(This item is displayed on page 696 in the print version) 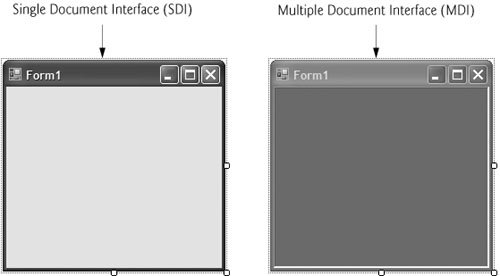 In most cases, the parent Form creates the child, so the parentForm reference is this. The code to create a child usually lies inside an event handler, which creates a new window in response to a user action. Menu selections (such as File, followed by a submenu option of New, followed by a submenu option of Window) are common techniques for creating new child windows.

Class Form property MdiChildren returns an array of child Form references. This is useful if the parent window wants to check the status of all its children (for example, ensuring that all are saved before the parent closes). Property ActiveMdiChild returns a reference to the active child window; it returns Nothing if there are no active child windows. Other features of MDI windows are described in Fig. 14.39.

(This item is displayed on page 698 in the print version) 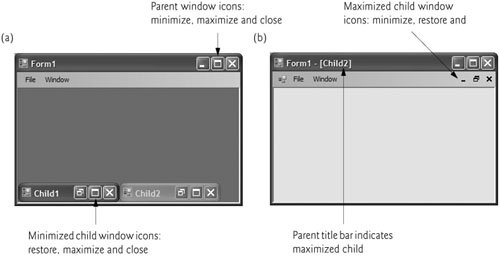 C# provides a property that helps track which child windows are open in an MDI container. Property MdiWindowListItem of class MenuStrip specifies which menu, if any, displays a list of open child windows. When a new child window is opened, an entry is added to the list (as in the first screen of Figure 14.41). If nine or more child windows are open, the list includes the option More Windows..., which allows the user to select a window from a list in a dialog.

(This item is displayed on page 698 in the print version) 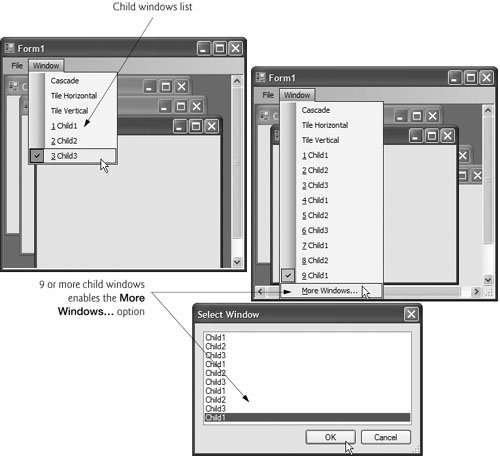 MDI containers allow you to organize the placement ofs child windows. The child windows in an MDI application can be arranged by calling method LayoutMdi of the parent Form. Method LayoutMdi takes a MdiLayout enumeration, which can have values ArrangeIcons, Cascade, TileHorizontal and TileVertical. Tiled windows completely fill the parent and do not overlap; such windows can be arranged horizontally (value TileHorizontal) or vertically (value TileVertical). Cascaded windows (value Cascade) overlapeach is the same size and displays a visible title bar, if possible. Value ArrangeIcons arranges the icons for any minimized child windows. If minimized windows are scattered around the parent window, value ArrangeIcons orders them neatly at the bottom-left corner of the parent window. Figure 14.42 illustrates the values of the MdiLayout enumeration. 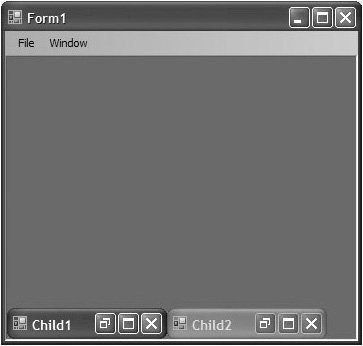 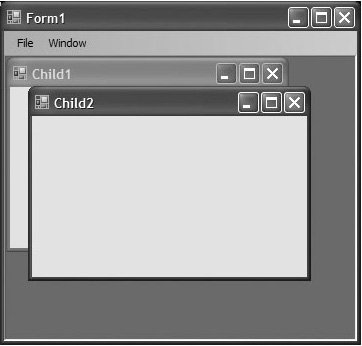 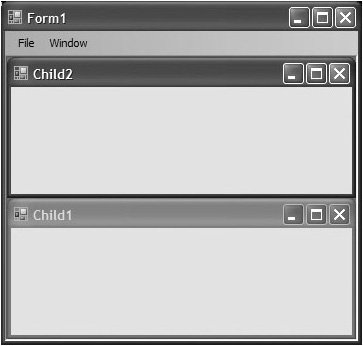 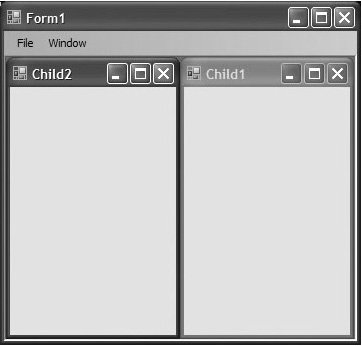 In the Properties window, we set the Form's IsMdiContainer property to true, making the Form an MDI parent. In addition, we set the MenuStrip's MdiWindowListItem property to windowToolStripMenuItem. This enables the Window menu to contain the list of child MDI windows.

At this point, the application is still incompletewe must define the MDI child class. To do this, right click the project in the Solution Explorer and select Add > Windows Form.... Then name the new class in the dialog as ChildForm (Fig. 14.44). Next, we add a PictureBox (picDisplay) to ChildForm. In the constructor, line 15 sets the title bar text. Lines 1819 set ChildForm's Image property to an Image, using method FromFile.

After the MDI child class is defined, the parent MDI Form (Fig. 14.43) can create new child windows. The event handlers in lines 1646 create a new child Form corresponding to the menu item clicked. Lines 2021, 3132 and 4243 create new instances of ChildForm. Lines 22, 33 and 44 set each Child's MdiParent property to the parent Form. Lines 23, 34 and 45 call method Show to display each child Form.