Although an XML document is a text file, retrieving data from the document using traditional sequential file processing techniques is neither practical nor efficient, especially for adding and removing elements dynamically.

Upon successfully parsing a document, some XML parsers store document data as tree structures in memory. Figure 19.21 illustrates the tree structure for the root element of the document article.xml discussed in Fig. 19.2. This hierarchical tree structure is called a Document Object Model (DOM) tree, and an XML parser that creates this type of structure is known as a DOM parser. Each element name (e.g., article, date, firstName) is represented by a node. A node that contains other nodes (called child nodes or children) is called a parent node (e.g., author). A parent node can have many children, but a child node can have only one parent node. Nodes that are peers (e.g., firstName and lastName) are called sibling nodes. A node's descendant nodes include its children, its children's children and so on. A node's ancestor nodes include its parent, its parent's parent and so on.

(This item is displayed on page 964 in the print version) 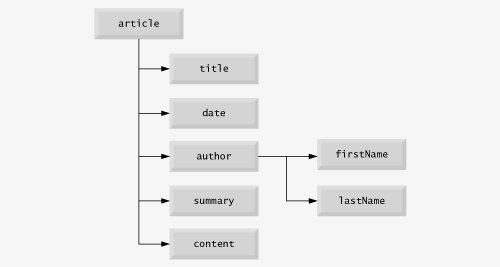 Classes for creating, reading and manipulating XML documents are located in the C# namespace System.Xml. This namespace also contains additional namespaces that provide other XML-related operations.

Reading an XML Document with an XmlReader

In this section, we present several examples that use DOM trees. Our first example, the program in Fig. 19.22, loads the XML document presented in Fig. 19.2 and displays its data in a text box. This example uses class XmlReader to iterate through each node in the XML document.

Method Read of XmlReader reads one node from the DOM tree. By calling this method in the while loop condition (line 27), reader Reads all the document nodes. The switch statement (lines 2758) processes each node. Either the Name property (lines 32, 50 and 55), which contains the node's name, or the Value property (lines 40 and 44), which contains the node's data, is formatted and concatenated to the string assigned to the TextBox's Text property. The XmlReader's NodeType property specifies whether the node is an element, comment, text, XML declaration or end element. Note that each case specifies a node type using XmlNodeType enumeration constants. For example, XmlNodeType.Element (line 31) indicates the start tag of an element.

The displayed output emphasizes the structure of the XML document. Variable depth (line 23) maintains the number of tab characters to indent each element. The depth is incremented each time the program encounters an Element and is decremented each time the program encounters an EndElement or empty element. We use a similar technique in the next example to emphasize the tree structure of the XML document being displayed.

Displaying a DOM Tree Graphically in a treeView Control

XmlReaders do not provide features for displaying their content graphically. In this example, we display an XML document's contents using a TreeView control. We use class TreeNode to represent each node in the tree. Class treeView and class treeNode are part of the System.Windows.Forms namespace. treeNodes are added to the TReeView to emphasize the structure of the XML document.

The C# program in Fig. 19.23 demonstrates how to manipulate a DOM tree programmatically to display it graphically in a treeView control. The GUI for this application contains a TReeView control named xmlTreeView (declared in XmlDom.Designer.cs). The application loads letter.xml (Fig. 19.24) into XmlReader (line 27), then displays the document's tree structure in the TReeView control. [Note: The version of letter.xml in Fig. 19.24 is nearly identical to the one in Fig. 19.4, except that Fig. 19.24 does not reference a DTD as line 5 of Fig. 19.4 does.]

Figure 19.23. DOM structure of an XML document displayed in a treeView.

(This item is displayed on page 970 in the print version)

In XmlDomForm's Load event handler (lines 1934), lines 2324 create an XmlReaderSettings object and set its IgnoreWhitespace property to true so that the insignificant whitespaces in the XML document are ignored. Line 27 then invokes static XmlReader method Create to parse and load letter.xml.

Line 29 creates the treeNode tree (declared in line 16). This TReeNode is used as a graphical representation of a DOM tree node in the TReeView control. Line 31 assigns the XML document's name (i.e., letter.xml) to tree's Text property. Line 32 calls method Add to add the new treeNode to the treeView's Nodes collection. Line 33 calls method BuildTree to update the treeView so that it displays source's complete DOM tree.

Line 52 matches an EndElement node type. This case moves up the tree to the current node's parent because the end of an element has been encountered. Line 53 accesses TReeNode's Parent property to retrieve the node's current parent.

After the entire DOM tree is processed, the TReeNode node list is displayed in the treeView control (lines 8788). TReeView method ExpandAll causes all the nodes of the tree to be displayed. TReeView method Refresh updates the display to show the newly added TReeNodes. Note that while the application is running, clicking nodes (i.e., the + or boxes) in the treeView either expands or collapses them.

Although XmlReader includes methods for reading and modifying node values, it is not the most efficient means of locating data in a DOM tree. The Framework Class Library provides class XPathNavigator in the System.Xml.XPath namespace for iterating through node lists that match search criteria, which are written as XPath expressions. Recall that XPath (XML Path Language) provides a syntax for locating specific nodes in XML documents effectively and efficiently. XPath is a string-based language of expressions used by XML and many of its related technologies (such as XSLT, discussed in Section 19.7).

Figure 19.25 uses an XPathNavigator to navigate an XML document and uses a treeView control and treeNode objects to display the XML document's structure. In this example, the TReeNode node list is updated each time the XPathNavigator is positioned to a new node, rather than displaying the entire DOM tree at once. Nodes are added to and deleted from the treeView to reflect the XPathNavigator's location in the DOM tree. Figure 19.26 shows the XML document sports.xml that we use in this example. [Note: The versions of sports.xml presented in Fig. 19.26 and Fig. 19.16 are nearly identical. In the current example, we do not want to apply an XSLT, so we omit the processing instruction found in line 2 of Fig. 19.16.]

(This item is displayed on page 976 in the print version)

Whenever we move forward using XPathNavigator, as with MoveToFirstChild and MoveToNext, nodes are added to the treeNode node list. The private method DetermineType (lines 176189) determines whether to assign the Node's Name property or Value property to the TReeNode (lines 182 and 186). Whenever MoveToParent is called, all the children of the parent node are removed from the display. Similarly, a call to MoveToPrevious removes the current sibling node. Note that the nodes are removed only from the TReeView, not from the tree representation of the document.

The selectButton_Click event handler (lines 4258) corresponds to the Select button. XPathNavigator method Select (line 49) takes search criteria in the form of either an XPathExpression or a string that represents an XPath expression, and returns as an XPathNodeIterator object any node that matches the search criteria. Figure 19.27 summarizes the XPath expressions provided by this program's combo box. We show the result of some of these expressions in Figs. 19.25(b)(d).

Method DisplayIterator (defined in lines 166173) appends the node values from the given XPathNodeIterator to the selectTextBox. Note that we call string method trim to remove unnecessary whitespace. Method MoveNext (line 171) advances to the next node, which property Current (line 172) can access.