To create a Panel, drag its icon from the Toolbox onto the Form. You can then add controls directly to the Panel by dragging them from the Toolbox onto the Panel. To enable the scrollbars, set the Panel's AutoScroll property to TRue. If the Panel is resized and cannot display all of its controls, scrollbars appear (Fig. 13.23). The scrollbars can be used to view all the controls in the Panelboth at design time and at execution time. In Fig. 13.23, we set the Panel's BorderStyle property to FixedSingle so that you can see the Panel in the Form.

Figure 13.23. Creating a Panel with scrollbars. 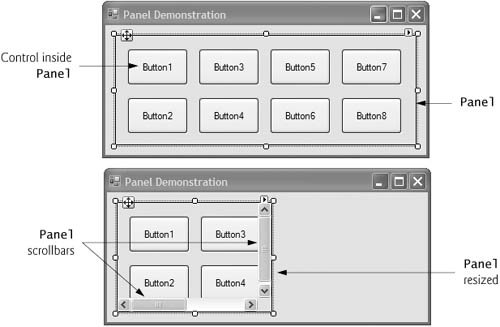 The program in Fig. 13.24 uses a GroupBox and a Panel to arrange Buttons. When these Buttons are clicked, their event handlers change the text on a Label.

(This item is displayed on page 617 in the print version)

The event handlers for the four Buttons are located in lines 1637. We added a line in each event handler (lines 18, 24, 30 and 36) to change the text of messageLabel to indicate which Button the user pressed.