At any time, a thread is said to be in one of several thread states that are illustrated in the UML state diagram of Fig. 15.1. This section discusses these states and the transitions between states. Two classes critical for multithreaded applications are Thread and Monitor (System.Threading namespace). This section also discusses several methods of classes THRead and Monitor that cause state transitions. A few of the terms in the diagram are discussed in later sections.

(This item is displayed on page 722 in the print version) 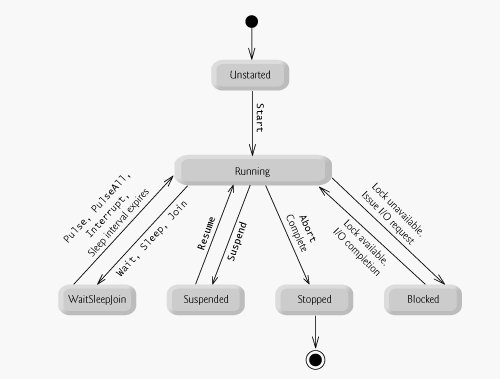 A Thread object begins its life cycle in the Unstarted state when the program creates the object and passes a ThreadStart delegate to the object's constructor. The THReadStart delegate, which specifies the actions the thread will perform during its life cycle, must be initialized with a method that returns void and takes no arguments. [Note: .NET 2.0 also includes a ParameterizedThreadStart delegate to which you can pass a method that takes arguments. For more information, visit the site msdn2.microsoft.com/en-us/library/xzehzsds.] The thread remains in the Unstarted state until the program calls the Thread's Start method, which places the thread in the Running state and immediately returns control to the part of the program that called Start. Then the newly Running thread and any other threads in the program can execute concurrently on a multiprocessor system or share the processor on a system with a single processor.

A thread is considered Blocked if it is unable to use a processor even if one is available. For example, a thread becomes blocked when it issues an input/output (I/O) request. The operating system blocks the thread from executing until the operating system can complete the I/O request for which the thread is waiting. At that point, the thread returns to the Running state, so it can resume execution. Another case in which a thread becomes blocked is in thread synchronization (Section 15.5). A thread being synchronized must acquire a lock on an object by calling Monitor method Enter. If a lock is not available, the thread is blocked until the desired lock becomes available. [Note: The Blocked state is not an actual state in .NET. It is a conceptual state that describes a thread that is not Running.]

A Running thread can call Thread method Sleep to enter the WaitSleepJoin state for a period of milliseconds specified as the argument to Sleep. A sleeping thread returns to the Running state when its designated sleep time expires. Sleeping threads cannot use a processor, even if one is available.

Any thread that enters the WaitSleepJoin state by calling Monitor method Wait or by calling Thread method Sleep also leaves the WaitSleepJoin state and returns to the Running state if the sleeping or waiting THRead's Interrupt method is called by another thread in the program. The Interrupt method causes a THReadInterruptionException to be thrown in the interrupted thread.