In almost every example in the text, we have seen that classes from preexisting libraries, such as the .NET Framework Class Library, can be imported into a C# application. Each class in the FCL belongs to a namespace that contains a group of related classes. As applications become more complex, namespaces help you manage the complexity of application components. Class libraries and namespaces also facilitate software reuse by enabling applications to add classes from other namespaces (as we have done in most examples). This section introduces how to create your own class libraries.

Steps for Declaring and Using a Reusable Class

(This item is displayed on page 442 in the print version)

For Step 1 in this discussion, we use the public class Time1 declared in Fig. 9.1. No modifications have been made to the implementation of the class, so we will not discuss its implementation details again here.

Only namespace declarations, using directives, comments and C# attributes (first used in Chapter 18) can appear outside the braces of a type declaration (e.g., classes and enumerations). Only class declarations declared public will be reusable by clients of the class library. Non-public classes are typically placed in a library to support the public reusable classes in that library.

Step 3 is to compile the class into a class library. To create a class library in Visual C# Express, we must create a new project by clicking the File menu, selecting New Project... and choosing Class Library from the list of templates, as shown in Fig. 9.17. Then add the code from Fig. 9.16 into the new project (either by copying our code from the book's examples or by typing the code yourself). In the projects you've created so far, the C# compiler created an executable .exe containing the application. When you compile a Class Library project, the compiler creates a .dll file, known as a dynamic link librarya type of assembly that you can reference from other applications. 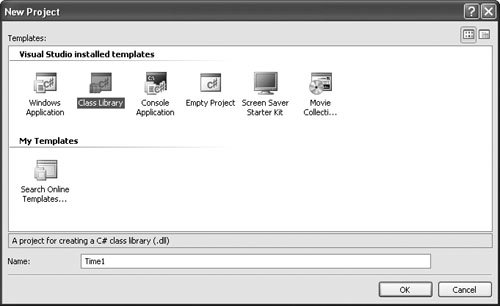 Step 4: Adding a Reference to the Class Library

Once the class is compiled and stored in the class library file, the library can be referenced from any application by indicating to the Visual C# Express IDE where to find the class library file (Step 4). Create a new (empty) project and right-click the project name in the Solution Explorer window. Select Add Reference... from the pop-up menu that appears. The dialog box that appears will contain a list of class libraries from the .NET Framework. Some class libraries, like the one containing the System namespace, are so common that they are added to your application implicitly. The ones in this list are not.

In the Add Reference... dialog box, click the Browse tab. Recall from Section 3.3 that when you build an application, Visual C# 2005 places the .exe file in the binRelease folder in the directory of your application. When you build a class library, Visual C# places the .dll file in the same place. In the Browse tab, you can navigate to the directory containing the class library file you created in Step 3, as shown in Fig. 9.18. Select the .dll file and click OK.

(This item is displayed on page 444 in the print version) 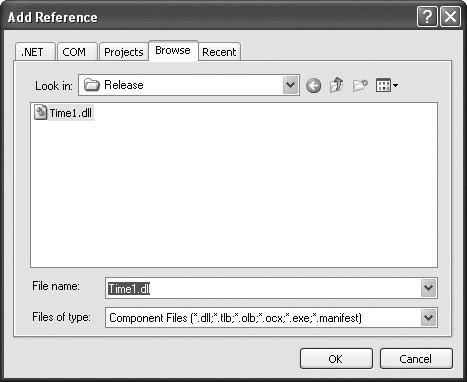 Step 5: Using the Class from an Application