When two objects communicate with each other to accomplish a task, they are said to collaborate. A collaboration consists of an object of one class sending a message to an object of another class. Messages are sent in C# via method calls. In this section, we concentrate on the collaborations (interactions) among the objects in our ATM system.

In Section 7.15, we determined many of the operations of the classes in our system. In this section, we concentrate on the messages that invoke these operations. To identify the collaborations in the system, we return to the requirements document of Section 3.10. Recall that this document specifies the activities that occur during an ATM session (e.g., authenticating a user, performing transactions). The steps used to describe how the system must perform each of these tasks are our first indication of the collaborations in our system. As we proceed through this and the remaining Software Engineering Case Study sections, we may discover additional collaborations.

We begin to identify the collaborations in the system by carefully reading the sections of the requirements document that specify what the ATM should do to authenticate a user and to perform each transaction type. For each action or step described in the requirements document, we decide which objects in our system must interact to achieve the desired result. We identify one object as the sending object (i.e., the object that sends the message) and another as the receiving object (i.e., the object that offers that operation to clients of the class). We then select one of the receiving object's operations (identified in Section 7.15) that must be invoked by the sending object to produce the proper behavior. For example, the ATM displays a welcome message when idle. We know that an object of class Screen displays a message to the user via its DisplayMessage operation. Thus, we decide that the system can display a welcome message by employing a collaboration between the ATM and the Screen in which the ATM sends a DisplayMessage message to the Screen by invoking the DisplayMessage operation of class Screen. [Note: To avoid repeating the phrase "an object of class...," we refer to each object simply by using its class name preceded by an article (e.g., "a," "an" or "the")for example, "the ATM" refers to an object of class ATM.]

Let's consider the collaborations in Fig. 8.24. Before allowing a user to perform any transactions, the ATM must prompt the user to enter an account number, then to enter a PIN. It accomplishes each of these tasks by sending a DisplayMessage message to the Screen. Both of these actions refer to the same collaboration between the ATM and the Screen, which is already listed in Fig. 8.24. The ATM obtains input in response to a prompt by sending a GetInput message to the Keypad. Next the ATM must determine whether the user-specified account number and PIN match those of an account in the database. It does so by sending an AuthenticateUser message to the BankDatabase. Recall that the BankDatabase cannot authenticate a user directlyonly the user's Account (i.e., the Account that contains the account number specified by the user) can access the user's PIN to authenticate the user. Figure 8.24 therefore lists a collaboration in which the BankDatabase sends a ValidatePIN message to an Account.

After the user is authenticated, the ATM displays the main menu by sending a series of DisplayMessage messages to the Screen and obtains input containing a menu selection by sending a GetInput message to the Keypad. We have already accounted for these collaborations. After the user chooses a type of transaction to perform, the ATM executes the transaction by sending an Execute message to an object of the appropriate transaction class (i.e., a BalanceInquiry, a Withdrawal or a Deposit). For example, if the user chooses to perform a balance inquiry, the ATM sends an Execute message to a BalanceInquiry.

Figure 8.25 shows a communication diagram that models the ATM executing a BalanceInquiry. Objects are modeled in the UML as rectangles containing names in the form objectName : ClassName. In this example, which involves only one object of each type, we disregard the object name and list only a colon followed by the class name. Specifying the name of each object in a communication diagram is recommended when modeling multiple objects of the same type. Communicating objects are connected with solid lines, and messages are passed between objects along these lines in the direction shown by arrows with filled arrowheads. The name of the message, which appears next to the arrow, is the name of an operation (i.e., a method) belonging to the receiving objectthink of the name as a service that the receiving object provides to sending objects (its "clients").

Figure 8.25. Communication diagram of the ATM executing a balance inquiry.

(This item is displayed on page 381 in the print version)

Figure 8.26 shows a communication diagram that models the interactions among objects in the system when an object of class BalanceInquiry executes. We assume that the object's accountNumber attribute contains the account number of the current user. The collaborations in Fig. 8.26 begin after the ATM sends an Execute message to a BalanceInquiry (i.e., the interaction modeled in Fig. 8.25). The number to the left of a message name indicates the order in which the message is passed. The sequence of messages in a communication diagram progresses in numerical order from least to greatest. In this diagram, the numbering starts with message 1 and ends with message 3. The BalanceInquiry first sends a GetAvailableBalance message to the BankDatabase (message 1), then sends a GetTotalBalance message to the BankDatabase (message 2). Within the parentheses following a message name, we can specify a comma-separated list of the names of the arguments sent with the message (i.e., arguments in a C# method call)the BalanceInquiry passes attribute accountNumber with its messages to the BankDatabase to indicate which Account's balance information to retrieve. Recall from Fig. 7.22 that operations GetAvailableBalance and GetTotalBalance of class BankDatabase each require a parameter to identify an account. The BalanceInquiry next displays the available balance and the total balance to the user by passing a DisplayMessage message to the Screen (message 3) that includes a parameter indicating the message to be displayed.

(This item is displayed on page 382 in the print version) 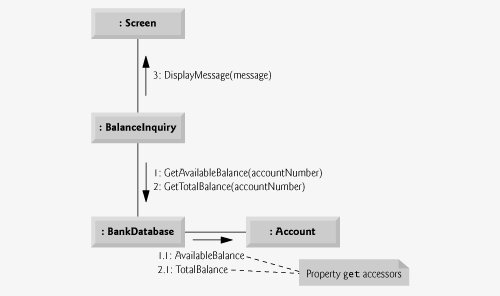 Note that Fig. 8.26 models two additional messages passing from the BankDatabase to an Account (message 1.1 and message 2.1). To provide the ATM with the two balances of the user's Account (as requested by messages 1 and 2), the BankDatabase must send get messages to the Account's AvailableBalance and TotalBalance properties. A message passed within the handling of another message is called a nested message. The UML recommends using a decimal numbering scheme to indicate nested messages. For example, message 1.1 is the first message nested in message 1the BankDatabase sends the get message to the Account's AvailableBalance property during BankDatabase's processing of a GetAvailableBalance message. [Note: If the BankDatabase needed to pass a second nested message while processing message 1, the second message would be numbered 1.2.] A message may be passed only when all the nested messages from the previous message have been passed. For example, the BalanceInquiry passes message 3 to the Screen only after messages 2 and 2.1 have been passed, in that order.

The nested numbering scheme used in communication diagrams helps clarify precisely when and in what context each message is passed. For example, if we numbered the five messages in Fig. 8.26 using a flat numbering scheme (i.e., 1, 2, 3, 4, 5), someone looking at the diagram might not be able to determine that BankDatabase passes the get message to an Account's AvailableBalance property (message 1.1) during the BankDatabase's processing of message 1, as opposed to after completing the processing of message 1. The nested decimal numbers make it clear that the get message (message 1.1) is passed to an Account's AvailableBalance property within the handling of the GetAvailableBalance message (message 1) by the BankDatabase.

Communication diagrams emphasize the participants in collaborations but model their timing a bit awkwardly. A sequence diagram helps model the timing of collaborations more clearly. Figure 8.27 shows a sequence diagram modeling the sequence of interactions that occur when a Withdrawal executes. The dotted line extending down from an object's rectangle is that object's lifeline, which represents the progression of time. Actions typically occur along an object's lifeline in chronological order from top to bottoman action near the top happens before one near the bottom. 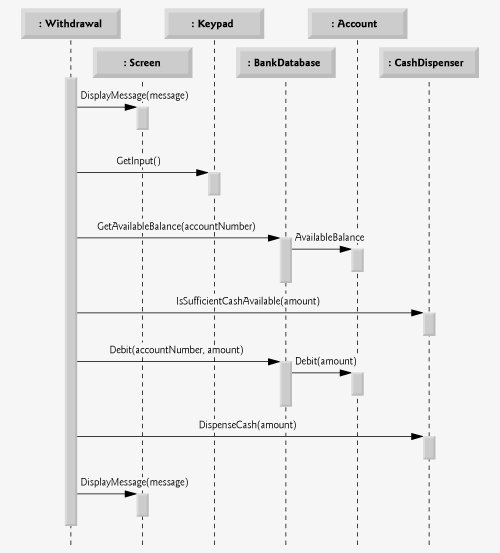 Message passing in sequence diagrams is similar to message passing in communication diagrams. An arrow with a filled arrowhead extending from the sending object to the receiving object represents a message between two objects. The arrowhead points to an activation on the receiving object's lifeline. An activation, shown as a thin vertical rectangle, indicates that an object is executing. When an object returns control, a return message, represented as a dashed line with a stick arrowhead, extends from the activation of the object returning control to the activation of the object that initially sent the message. To eliminate clutter, we omit the return-message arrowsthe UML allows this practice to make diagrams more readable. Like communication diagrams, sequence diagrams can indicate message parameters between the parentheses following a message name.

The sequence of messages in Fig. 8.27 begins when a Withdrawal prompts the user to choose a withdrawal amount by sending a DisplayMessage message to the Screen. The Withdrawal then sends a GetInput message to the Keypad, which obtains input from the user. We have already modeled the control logic involved in a Withdrawal in the activity diagram of Fig. 6.28, so we do not show this logic in the sequence diagram of Fig. 8.27. Instead, we model the best-case scenario, in which the balance of the user's account is greater than or equal to the chosen withdrawal amount, and the cash dispenser contains a sufficient amount of cash to satisfy the request. For information on how to model control logic in a sequence diagram, please refer to the Web resources and recommended readings listed at the end of Section 3.10.

We have identified collaborations among objects in the ATM system and modeled some of these collaborations using UML interaction diagramscommunication diagrams and sequence diagrams. In the next Software Engineering Case Study section (Section 9.17), we enhance the structure of our model to complete a preliminary object-oriented design, then we begin implementing the ATM system in C#.