The Web methods we have demonstrated so far all received and returned simple type values. It is also possible to process user-defined typesknown as custom typesin a Web service. These types can be passed to or returned from Web methods. Web service clients also can use these user-defined types, because the proxy class created for the client contains the type definitions.

This section presents an EquationGenerator Web service that generates random arithmetic equations of type Equation. The client is a math-tutoring application that inputs information about the mathematical question that the user wishes to attempt (addition, subtraction or multiplication) and the skill level of the user (1 specifies equations using one-digit numbers, 2 specifies equations involving two-digit numbers and 3 specifies equations containing three-digit numbers). The Web service then generates an equation consisting of random numbers with the proper number of digits. The client application receives the Equation and displays the sample question to the user in a Windows Form.

We mentioned earlier that all types passed to and from Web services must be supported by SOAP. How, then, can SOAP support a type that is not even created yet? Custom types that are sent to or from a Web service are serialized, enabling them to be passed in XML format. This process is referred to as XML serialization.

Classes that are used to specify return types and parameter types for Web methods must meet several requirements:

Any data that is not serialized simply receives its default value (or the value provided by the default or parameterless constructor) when an object of the class is deserialized.

Figure 22.28 shows the result of testing the EquationGenerator Web service. Note that the return value from our Web method is XML-encoded. However, this example differs from previous ones in that the XML specifies the values for all public properties and data of the object that is being returned. The return object has been serialized in XML. Our proxy class takes this return value and deserializes it into an object of class Equation, then passes it to the client.

Figure 22.28. Returning an XML serialized object from a Web method.

a) Invoking the GenerateEquation method to create a subtraction equation with two-digit numbers. 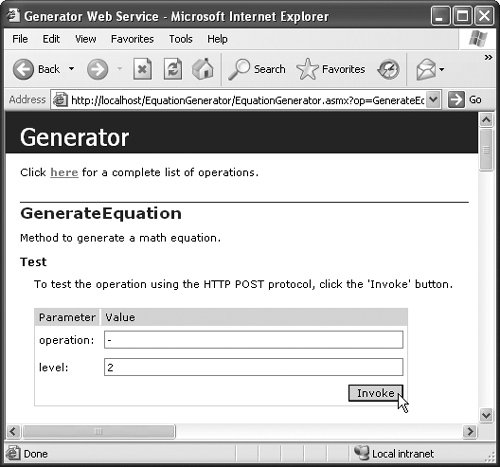 b) XML encoded results of invoking the GenerateEquation method to create a subtraction equation with two-digit numbers.

Note that an Equation object is not being passed between the Web service and the client. Rather, the information in the object is being sent as XML-encoded data. Clients created using .NET will take the information and create a new Equation object. Clients created on other platforms, however, may use the information differently. Readers creating clients on other platforms should check the Web services documentation for the specific platform they are using, to see how their clients may process custom types.

Let's examine Web method GenerateEquation more closely. Lines 1920 of Fig. 22.27 define the upper and lower bounds for the random numbers that the method uses to generate an Equation. To set these limits, the program first calls static method Pow of class Maththis method raises its first argument to the power of its second argument. To calculate the value of maximum (the upper bound for any randomly generated numbers used to form an Equation), the program raises 10 to the power of the specified level argument (line 19). If level is 1, maximum is 10; if level is 2, maximum is 100; and if level is 3, maximum is 1000. Variable minimum's value is determined by raising 10 to a power one less than level (line 20). This calculates the smallest number with level digits. If level is 1, minimum is 1; if level is 2, minimum is 10; and if level is 3, minimum is 100.

Lines 2729 create a new Equation object. The program calls Random method Next, which returns an int that is greater than or equal to the specified lower bound, but less than the specified upper bound. This method generates a left operand value that is greater than or equal to minimum but less than maximum (i.e., a number with level digits). The right operand is another random number with the same characteristics. Line 29 passes the string operation received by GenerateEquation to the Equation constructor. Line 31 returns the new Equation object to the client.

The MathTutor application (Fig. 22.29) uses the EquationGenerator Web service. The application calls the Web service's GenerateEquation method to create an Equation object. The tutor then displays the left-hand side of the Equation and waits for user input. This example accesses classes Generator and Equation from the localhost namespaceboth are placed in this namespace by default when the proxy is generated. We declare variables of these types at lines 2223. Line 23 also creates the Generator proxy.

The math-tutoring application displays an equation and waits for the user to enter an answer. The default setting for the difficulty level is 1, but the user can change this by choosing a level from the RadioButtons in the GroupBox labeled Difficulty. Clicking any of the levels invokes the corresponding RadioButton's CheckedChanged event handler (lines 6381), which sets integer level to the level selected by the user. Although the default setting for the question type is Addition, the user also can change this by selecting one of the RadioButtons in the GroupBox labeled Operation. Doing so invokes the corresponding operation's event handlers in lines 84108, which assigns to string operation the symbol corresponding to the user's selection. Each event handler also updates the Text property of the Generate button to match the newly selected operation.

Event handler generateButton_Click (lines 2636) invokes EquationGenerator method GenerateEquation (line 29). After receiving an Equation object from the Web service, the handler displays the left-hand side of the equation in questionLabel (line 32) and enables OkButton so that the user can enter an answer. When the user clicks OK, OkButton_Click (lines 3960) checks whether the user provided the correct answer.