Now we begin designing the ATM system that we introduced in Chapter 3. In this section, we identify the classes that are needed to build the ATM system by analyzing the nouns and noun phrases that appear in the requirements document. We introduce UML class diagrams to model the relationships between these classes. This is an important first step in defining the structure of our system.

We create classes only for the nouns and noun phrases that have significance in the ATM system. We do not need to model "bank" as a class, because the bank is not a part of the ATM systemthe bank simply wants us to build the ATM. "User" and "customer" also represent entities outside of the systemthey are important because they interact with our ATM system, but we do not need to model them as classes in the ATM system. Recall that we modeled an ATM user (i.e., a bank customer) as the actor in the use case diagram of Fig. 3.31.

We do not model "$20 bill" or "deposit envelope" as classes. These are physical objects in the real world, but they are not part of what is being automated. We can adequately represent the presence of bills in the system using an attribute of the class that models the cash dispenser. (We assign attributes to classes in Section 5.14.) For example, the cash dispenser maintains a count of the number of bills it contains. The requirements document does not say anything about what the system should do with deposit envelopes after it receives them. We can assume that simply acknowledging the receipt of an envelopean operation performed by the class that models the deposit slotis sufficient to represent the presence of an envelope in the system. (We assign operations to classes in Section 7.15.)

Though the requirements document frequently describes a "transaction" in a general sense, we do not model the broad notion of a financial transaction at this time. Instead, we model the three types of transactions (i.e., "balance inquiry," "withdrawal" and "deposit") as individual classes. These classes possess specific attributes needed to execute the transactions they represent. For example, a withdrawal needs to know the amount of money the user wants to withdraw. A balance inquiry, however, does not require any additional data. Furthermore, the three transaction classes exhibit unique behaviors. A withdrawal involves dispensing cash to the user, whereas a deposit involves receiving a deposit envelope from the user. [Note: In Section 11.9, we "factor out" common features of all transactions into a general "transaction" class using the object-oriented concepts of abstract classes and inheritance.]

We determine the classes for our system based on the remaining nouns and noun phrases from Fig. 4.19. Each of these refers to one or more of the following:

The elements of this list are likely to be classes we will need to implement our system, although it's too early in our design process to claim that this list is complete.

We can now model the classes in our system based on the list we have created. We capitalize class names in the design processa UML conventionas we will do when we write the actual C# code that implements our design. If the name of a class contains more than one word, we run the words together and capitalize each word (e.g., MultipleWordName). Using these conventions, we create classes ATM, Screen, Keypad, CashDispenser, DepositSlot, Account, BankDatabase, BalanceInquiry, Withdrawal and Deposit. We construct our system using all of these classes as building blocks. Before we begin building the system, however, we must gain a better understanding of how the classes relate to one another.

Class diagrams also show the relationships between the classes of the system. Figure 4.21 shows how our classes ATM and Withdrawal relate to one another. For the moment, we choose to model only this subset of the ATM classes for simplicity. We present a more complete class diagram later in this section. Notice that the rectangles representing classes in this diagram are not subdivided into compartments. The UML allows the suppression of class attributes and operations in this manner, when appropriate, to create more readable diagrams. Such a diagram is said to be an elided diagramone in which some information, such as the contents of the second and third compartments, is not modeled. We will place information in these compartments in Section 5.14 and Section 7.15.

In Fig. 4.21, the solid line that connects the two classes represents an associationa relationship between classes. The numbers near each end of the line are multiplicity values, which indicate how many objects of each class participate in the association. In this case, following the line from one end to the other reveals that, at any given moment, one ATM object participates in an association with either zero or one Withdrawal objectszero if the current user is not performing a transaction or has requested a different type of transaction, and one if the user has requested a withdrawal. The UML can model many types of multiplicity. Figure 4.22 explains the multiplicity types.

The word currentTransaction at the Withdrawal end of the association line in Fig. 4.21 is a role name, which identifies the role the Withdrawal object plays in its relationship with the ATM. A role name adds meaning to an association between classes by identifying the role a class plays in the context of an association. A class can play several roles in the same system. For example, in a college personnel system, a person may play the role of "professor" when relating to students. The same person may take on the role of "colleague" when participating in a relationship with another professor, and "coach" when coaching student athletes. In Fig. 4.21, the role name currentTransaction indicates that the Withdrawal object participating in the Executes association with an object of class ATM represents the transaction currently being processed by the ATM. In other contexts, a Withdrawal object may take on other roles (e.g., the previous transaction). Notice that we do not specify a role name for the ATM end of the Executes association. Role names are often omitted in class diagrams when the meaning of an association is clear without them.

According to the UML specification, composition relationships have the following properties:

The solid diamonds in our class diagrams indicate composition relationships that ful-fill these three properties. If a "has-a" relationship does not satisfy one or more of these criteria, the UML specifies that hollow diamonds be attached to the ends of association lines to indicate aggregationa weaker form of composition. For example, a personal computer and a computer monitor participate in an aggregation relationshipthe computer "has a" monitor, but the two parts can exist independently, and the same monitor can be attached to multiple computers at once, thus violating the second and third properties of composition.

Figure 4.24 shows a class diagram for the ATM system. This diagram models most of the classes that we identified earlier in this section, as well as the associations between them that we can infer from the requirements document. [Note: Classes BalanceInquiry and Deposit participate in associations similar to those of class Withdrawal, so we have chosen to omit them from this diagram for simplicity. In Chapter 11, we expand our class diagram to include all the classes in the ATM system.] 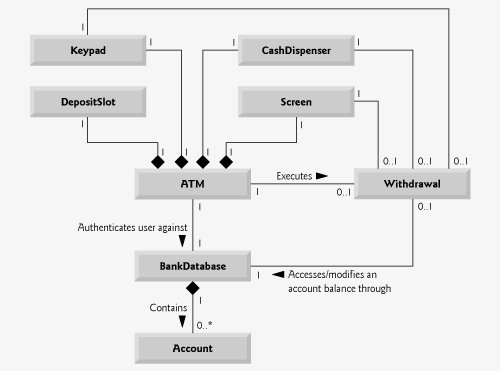 Figure 4.24 also indicates that if the user is performing a withdrawal, "one object of class Withdrawal accesses/modifies an account balance through one object of class BankDatabase." We could have created an association directly between class Withdrawal and class Account. The requirements document, however, states that the "ATM must interact with the bank's account information database" to perform transactions. A bank account contains sensitive information, and systems engineers must always consider the security of personal data when designing a system. Thus, only the BankDatabase can access and manipulate an account directly. All other parts of the system must interact with the database to retrieve or update account information (e.g., an account balance).

The class diagram in Fig. 4.24 also models associations between class Withdrawal and classes Screen, CashDispenser and Keypad. A withdrawal transaction includes prompting the user to choose a withdrawal amount and receiving numeric input. These actions require the use of the screen and the keypad, respectively. Dispensing cash to the user requires access to the cash dispenser. 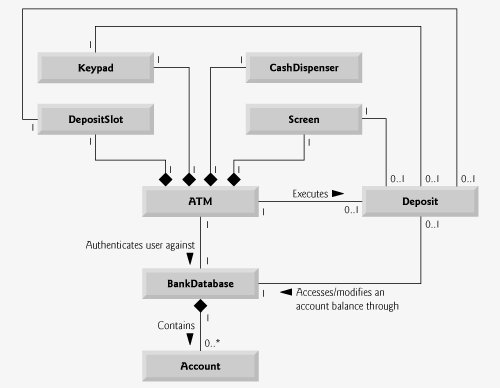 Database Modeling with MicrosoftВ® Visio for Enterprise Architects (The Morgan Kaufmann Series in Data Management Systems)
Interprocess Communications in Linux: The Nooks and Crannies
Inside Network Security Assessment: Guarding Your IT Infrastructure
Java for RPG Programmers, 2nd Edition
Lotus Notes Developers Toolbox: Tips for Rapid and Successful Deployment
An Introduction to Design Patterns in C++ with Qt 4
VBScript in a Nutshell, 2nd Edition
Flylib.com © 2008-2017.
If you may any questions please contact us: flylib@qtcs.net
Privacy policy
This website uses cookies. Click here to find out more.
Accept cookies