Forms are widely considered to be the most important building block for practically every application and are usually the best place to start when creating a new application. A successful application requires a balance between the collection and presentation of information to the end-user. In other words, fields should be created based on functional requirements and placed on the form in a manner that's easily understood by the user community.

Forms organize and provide structure to data records, or documents, in a Notes database. Using forms, you can display information in an organized fashion on the screen. Forms are also used to add new data or modify existing data. Virtually all Notes databases have one or more forms that are used to view and manipulate data records. In short, forms are the most important building block of a Notes database application.

Let's say, for example, that you have a Human Resource application used to manage employee information. For each employee in the company, there is a corresponding document in the database. Each document contains the employee name, Social Security number, birth date, hire date, employee number, department, and phone number (see Figure 4.3). This information is all related to one person and is stored in a single document. Using forms, you can

Figure 4.3. Forms display information for a given document. 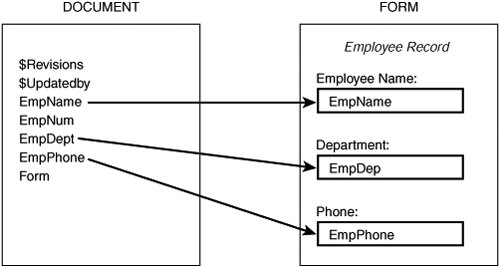 Forms manage data content for a single document. Forms can be designed to display any number of fields associated with the document or none at all.

Many design objects are associated with a form. These objects define the look and feel of the form as well as how the form operates. The following table provides a summary of some of the objects that can be placed on a form. We'll review each of these objects in greater detail later in this chapter.

Now that we've discussed how forms are used and the components that comprise them, let's look at two illustrationsone from the Designer's perspective, the other from the user's perspective. Figure 4.4 shows a form called Contact Information that includes descriptive text, fields, one shared field (RecordNo), two action buttons (Save and Close), a collapsible section for employee education, and a layout region with an edit control or text field. 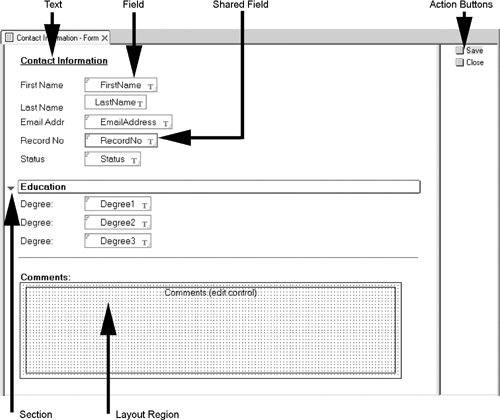 Now that you have seen a form in the Domino Designer client, let's take a look at the same form from the end-user's perspective using the Lotus Notes client (see Figure 4.5). Notice that the Save and Close buttons display at the top of the form and that the fields are framed with a box corner to show the start and end of each field. The layout region appears at the bottom of the form and includes a text area with a scroll bar.

Figure 4.5. Example form as displayed in the Lotus Notes client 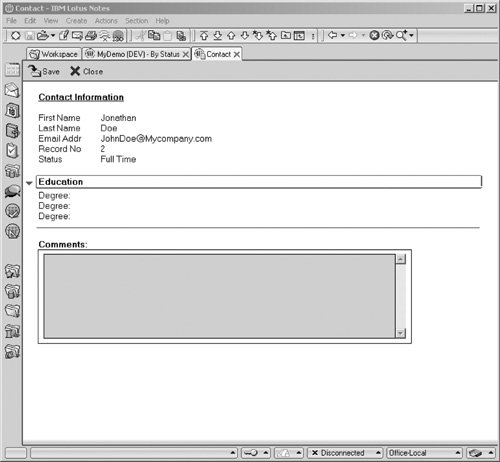 Designer provides two methods to create forms in a database. Forms can be created from scratch or copied from a preexisting database. As a general rule of thumb, a form should be copied only when the form functionality and layout meets the needs of the new database. Otherwise, you'll probably find it easier to create a new form. This will limit potential problems of integrating a form from one database into another.

When copying a form, all fields and property settings are duplicated in the new database. However, forms may contain references to other design objects stored external to the form. For example, an action button may reference a subroutine stored in a LotusScript library. These external objects are linked to each other. In other words, when copying a form into a new database, you may need to either copy other design objects from the source database or remove references that do not reside in the new database. There are several indicators that a form contains external references. Most notable is when a form cannot be opened in Lotus Notes and a message, such as "Illegal circular reference," is displayed. If this happens, you'll need to determine the conflicting or missing elements or delete the form. You may be able to determine what is causing the problem by deleting fields or source segments one by one and reopening the form (or database). You've identified the cause of the problem when the error no longer displays.

Follow these steps to create a new form from scratch.

A warning message will display when copying a form from a template database. A template is a special type of Notes database.

"The source database, 'MyProjects,' is a Design Template named 'Project Template.' After being pasted, would you like these forms to be automatically updated when those in the design template change?"

A hidden form is a form that does not display in the Create menu and is typically presented to the user through the implementation of application source code. In other words, hidden form does not mean the form cannot be displayed; it simply means the form is displayed using a method other than the menu options. A hidden form is created the same way as a regular form and contains the same elements: text, fields, layout regions, etc.

Forms are generally hidden when creating a dialog box, which is really just a form that's displayed differently. For example, using hidden forms, you can create custom popup dialog box windows that help the user perform a task or navigate the application.

For example, Figure 4.6 illustrates a hidden form. This hidden form is displayed in a dialog box and allows the user to specify the criteria for scheduling a recurring calendar appointment.

To hide a form, enclose the form name in open and close parentheses, "( )". Only the primary name needs to be enclosed. However, for consistency, it's recommended that you also enclose the alias name as well, such as "(RepeatReservation) | (Repeat)" (see Figure 4.7). 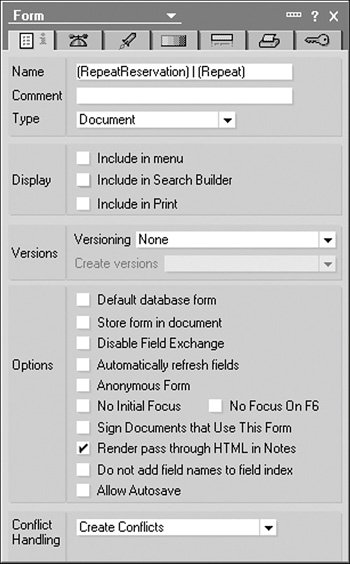 Hidden forms do not appear in the application menu even if the Include in menu option is selected in the form properties dialog.

Consider unchecking the Include in Search Builder option from the form properties dialog. More often than not, hidden forms are used to aid data entry and can be removed from a database text search. This will help make the search more efficient.