The Microsoft Agent control provides programmers with access to four predefined charactersGenie (a genie), Merlin (a wizard), Peedy (a parrot) and Robby (a robot). Each character has a unique set of animations that programmers can use in their applications to illustrate different points and functions. For instance, the Peedy character-animation set includes different flying animations, which the programmer might use to move Peedy on the screen. Microsoft provides basic information on Agent technology at

Microsoft Agent technology enables users to interact with applications and Web pages through speech, the most natural form of human communication. To understand speech, the control uses a speech recognition enginean application that translates vocal sound input from a microphone to language that the computer understands. The Microsoft Agent control also uses a text-to-speech engine, which generates characters' spoken responses. A text-to-speech engine is an application that translates typed words into audio sound that users hear through headphones or speakers connected to a computer. Microsoft provides speech recognition and text-to-speech engines for several languages at

Programmers can even create their own animated characters with the help of the Microsoft Agent Character Editor and the Microsoft Linguistic Sound Editing Tool. These products are available free for download from

This section introduces the basic capabilities of the Microsoft Agent control. For complete details on downloading this control, visit

The following example, Peedy's Pizza Palace, was developed by Microsoft to illustrate the capabilities of the Microsoft Agent control. Peedy's Pizza Palace is an online pizza shop where users can place their orders via voice input. The Peedy character interacts with users by helping them choose toppings and calculating the totals for their orders. You can view this example at

To run the example, you must go to www.microsoft.com/msagent/downloads/user.asp and download and install the Peedy character file, a text-to-speech engine and a speech-recognition engine.

Figure 17.28. Peedy introducing himself when the window opens.

(This item is displayed on page 857 in the print version) 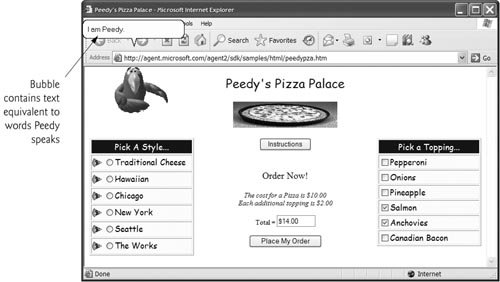 Programmers can synchronize character animations with speech output to illustrate a point or to convey a character's mood. For instance, Fig. 17.29 depicts Peedy's Pleased animation. The Peedy character-animation set includes eighty-five different animations, each of which is unique to the Peedy character.

(This item is displayed on page 857 in the print version) 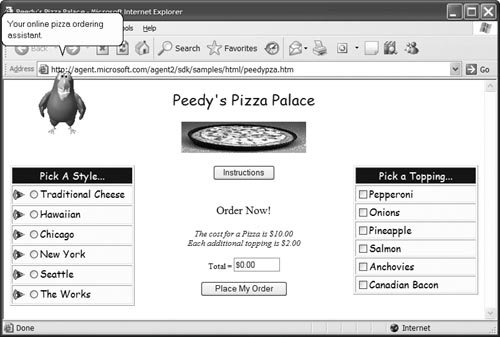 Peedy also responds to input from the keyboard and mouse. Figure 17.30 shows what happens when a user clicks Peedy with the mouse pointer. Peedy jumps up, ruffles his feathers and exclaims, "Hey, that tickles!" or "Be careful with that pointer!" Users can relocate Peedy on the screen by dragging him with the mouse. However, even when the user moves Peedy to a different part of the screen, he continues to perform his preset animations and location changes.

Figure 17.30. Peedy's reaction when he is clicked. 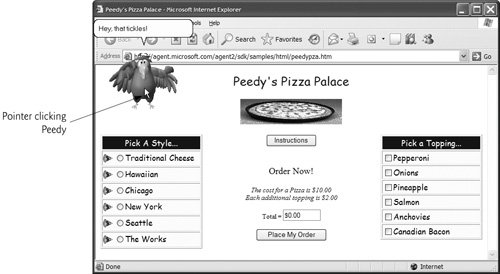 Many location changes involve animations. For instance, Peedy can hop from one screen location to another, or he can fly (Fig. 17.31). 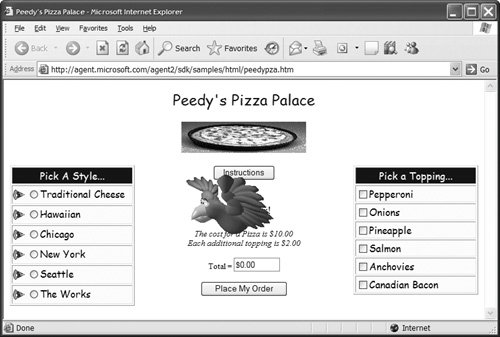 Once Peedy completes the ordering instructions, a tool tip appears beneath him indicating that he is listening for a voice command (Fig. 17.32). You can enter the type of pizza to order either by speaking the style name into a microphone or by clicking the radio button corresponding to your choice. 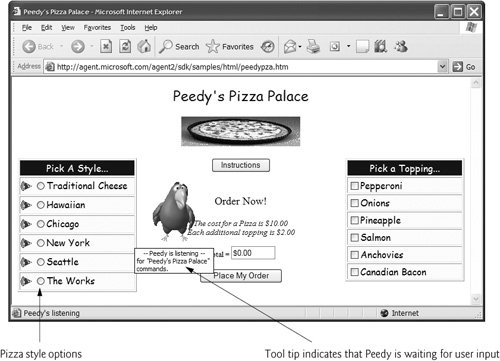 If you choose speech input, a box appears below Peedy displaying the words that Peedy "heard" (i.e., the words translated to the program by the speech-recognition engine). Once he recognizes your input, Peedy gives you a description of the selected pizza. Figure 17.33 shows what happens when you choose Seattle as the pizza style.

(This item is displayed on page 860 in the print version) 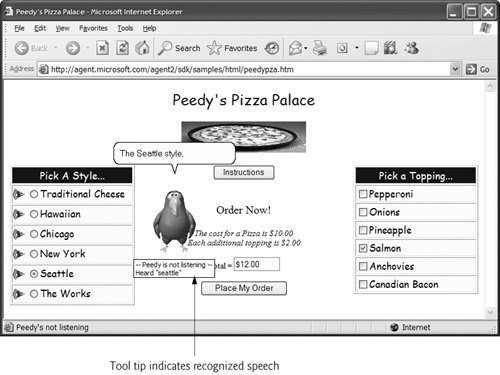 Peedy then asks you to choose additional toppings. Again, you can either speak or use the mouse to make a selection. Checkboxes corresponding to toppings that come with the selected pizza style are checked for you. Figure 17.34 shows what happens when you choose anchovies as an additional topping. Peedy makes a wisecrack about your choice.

Figure 17.34. Peedy repeating a request for anchovies as an additional topping.

(This item is displayed on page 860 in the print version) 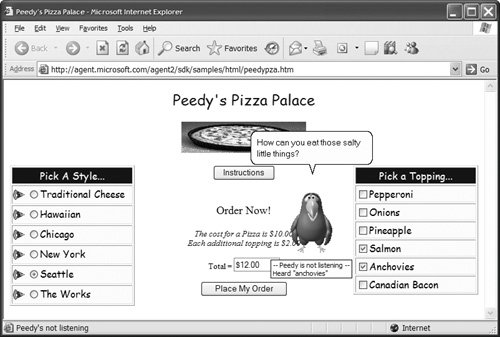 You can submit the order either by pressing the Place My Order button or by speaking "Place order" into the microphone. Peedy recounts the order while writing down the order items on his notepad (Fig. 17.35). He then calculates the figures on his calculator and reports the total price (Fig. 17.36). 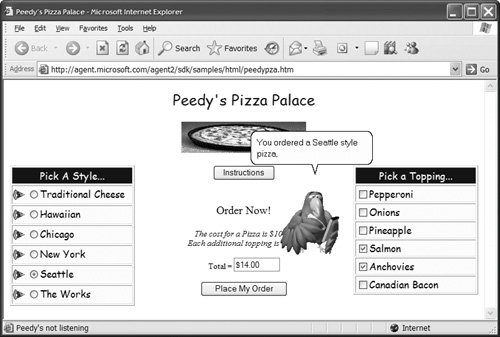 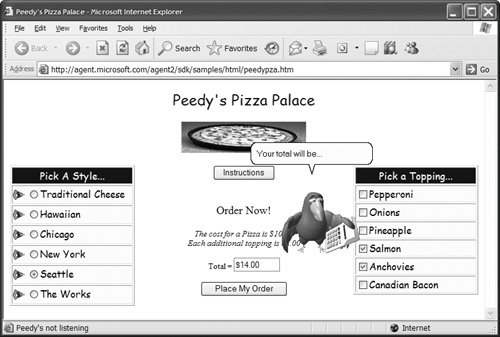 [Note: Before running this example, you must first download and install the Microsoft Agent control, a speech-recognition engine, a text-to-speech engine and the four character definitions from the Microsoft Agent Web site, as we discussed at the beginning of this section.]

The example also allows you to switch to a new character by speaking its name and creates a custom command, MoveToMouse. In addition, when you press the Speak Button, the characters speak any text that you typed in the TextBox.

In addition to the Microsoft Agent object mainAgent (of type AxAgent) that manages the characters, you also need a variable of type IAgentCtlCharacter to represent the current character. We create this variable, named speaker, in line 11.

Lines 3234 set Genie as the default character, obtain all animation names via our utility method GetAnimationNames and call IAgentCtlCharacter method Show to display the character. We access characters through property Characters of mainAgent, which contains all characters that have been loaded. We use the indexer of the Characters property to specify the name of the character that we wish to load (Genie).

Responding to the Agent Control's ClickEvent

When a user clicks the character (i.e., pokes it with the mouse), event handler mainAgent_ClickEvent (lines 5864) executes. First, speaker method Play plays an animation. This method accepts as an argument a string representing one of the predefined animations for the character (a list of animations for each character is available at the Microsoft Agent Web site; each character provides over 70 animations). In our example, the argument to Play is "Confused"this animation is defined for all four characters, each of which expresses this emotion in a unique way. The character then speaks, "Why are you poking me?" via a call to method Speak. Finally, we play the RestPose animation, which returns the character to its neutral, resting pose.

Obtaining a Character's List of Animations and Defining Its Commands

Method GetAnimationNames (lines 86119) fills the actionsCombo ComboBox with the current character's animation listing and defines the valid commands that can be used with the character. The method contains a lock block to prevent errors resulting from rapid character changes. The method uses an IEnumerator (lines 9293) to obtain the current character's animations. Lines 9899 clear the existing items in the ComboBox and the character's Commands property. Lines 102113 iterate through all items in the animation-name enumerator. For each animation, line 105 assigns the animation name to string voiceString. Line 106 removes any underscore characters (_) and replaces them with the string "underscore"; this changes the string so that a user can pronounce and employ it as a command activator. Line 108 adds the animation's name to the actionsCombo ComboBox. The Add method of the Commands property (lines 111112) adds a new command to the current character. In this example, we add every animation name as a command. Each call to Add receives the animation name as both the name of the command and the string that appears in the Commands pop-up window. The third argument is the voice command, and the last two arguments enable the command but indicate that it is not available via the Commands pop-up window. Thus, the command can be activated only by voice input. Lines 116117 create a new command, named MoveToMouse, which is visible in the Commands pop-up window.

Responding to Selections from the actionsCombo ComboBox

After the GetAnimationNames method has been called, the user can select a value from the actionsCombo ComboBox. Event handler actionsCombo_SelectedIndexChanged (lines 122128) stops any current animation, then plays the animation that the user selected from the ComboBox, followed by the RestPose animation.

Speaking the Text Typed by the User

You can also type text in the TextBox and click Speak. This causes event handler speakButton_Click (line 4555) to call speaker method Speak, supplying as an argument the text in speechTextBox. If the user clicks Speak without providing text, the character speaks, "Please, type the words you want me to speak".

Each time a user presses the Scroll Lock key and speaks into a microphone or selects a command from the Commands pop-up window, event handler mainAgent_Command (lines 131157) is called. This method is passed an argument of type AxAgentObjects._AgentEvents_CommandEvent, which contains a single property, userInput. The userInput property returns an Object that can be converted to type AgentObjects.IAgentCtlUserInput. Lines 135136 assign the userInput object to an IAgentCtlUserInput object named command, which is used to identify the command, so the program can respond appropriately. Lines 139144 use method ChangeCharacter to change the current Agent character if the user speaks a character name. Microsoft Agent always will show a character when a user speaks its name; however, by controlling the character change, we can ensure that only one Agent character is displayed at a time. Lines 147152 move the character to the current mouse location if the user invokes the MoveToMouse command. Agent method MoveTo takes x- and y-coordinate arguments and moves the character to the specified screen position, applying appropriate movement animations. For all other commands, we Play the command name as an animation in line 156.