Windows Forms are used to create the GUIs for programs. A Form is a graphical element that appears on your computer's desktop; it can be a dialog, a window or an MDI window (multiple document interface window)discussed in Chapter 14, Graphical User Interface Concepts: Part 2. A component is an instance of a class that implements the IComponent interface, which defines the behaviors that components must implement, such as how the component is loaded. A control, such as a Button or Label, has a graphical representation at runtime. Some components lack graphical representations (e.g., class Timer of namespace System.Windows.Formssee Chapter 14). Such, components are not visible at run time.

(This item is displayed on page 600 in the print version) 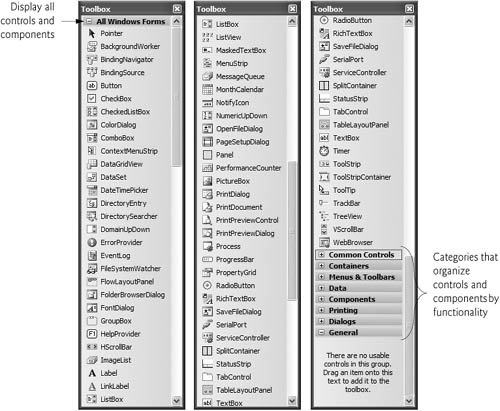 A Form is a container for controls and components. When you drag a control or component from the Toolbox on the Form, Visual Studio generates code that instantiates the object and sets its basic properties. This code is updated when the control or component's properties are modified in the IDE. If a control or component is removed from the Form, the generated code for that control is deleted. The generated code is placed by the IDE in a separate file using partial classes. Although we could write this code ourselves, it is much easier to create and modify controls and components using the Toolbox and Properties windows and allow Visual Studio to handle the details. We introduced visual programming concepts in Chapter 2. In this chapter and the next, we use visual programming to build more substantial GUIs.

Each control or component we present in this chapter is located in namespace System.Windows.Forms. To create a Windows application, you generally create a Windows Form, set its properties, add controls to the Form, set their properties and implement event handlers (methods) that respond to events generated by the controls. Figure 13.4 lists common Form properties, methods and events.