The first generation of cellular networks consisted of analog transmission systems for both voice and data. Although betterdigitalsystems are now available, it is important to understand the history of WWANs, so the following sections describe 1G systems for voice and data.

Analog cellular systems have been largely replaced with 2G digital networks, but you're likely to still hear about 1G standards, including the following: 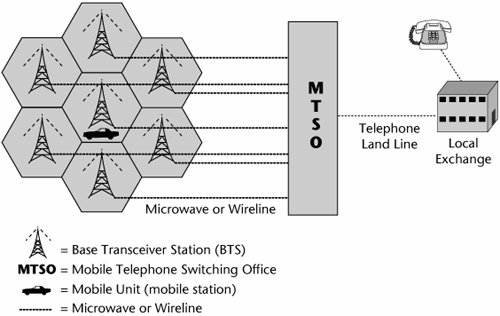 When a mobile unit is on, it emits two numbers consistently: the electronic identification number and the actual phone number of the handset. These are picked up by the base transceiver stations, and depending on the signal level, they can determine whether the unit is well within the cell or transitioning out of that cell. If the unit's power levels start to weaken and it appears that the unit is leaving the cell, an alert is raised that queries the surrounding base transceiver stations to see which one is picking up a strong signal coming in; as the unit crosses the cell perimeter, it is handed over to an adjacent frequency in that incoming cell. The mobile unit cannot stay on the same frequency in between adjacent cells because that would create co-channel interference (i.e., interference between cells).

Early wireless data networking methods included CDPD and packet radio. These technologies are not generally part of new deployments today because better solutions are now available. However, the following sections cover them briefly because you may encounter the language in your studies and should know what it means.

CDPD is a packet data protocol designed to work over AMPS or as a protocol for TDMA. The initial concept of CDPD was publicly introduced in 1992. CDPD was envisioned as a wide area mobile data network that could be deployed as an overlay to existing analog systems, a common standard to take advantage of unused bandwidth in the cellular airlink (i.e., the wireless connection between the service provider and the mobile subscriber). (Unused bandwidth is a result of silence in conversations as well as the moments in time when a call is undergoing handover between cells. These periods of no activity can be used to carry data packets and therefore take advantage of the unused bandwidth.) That was the main objective, and it was backed mostly by large cellular network operators.

CDPD is defined as a connectionless, multiprotocol network service that provides peer network wireless extension to the Internet. CDPD's greatest advantage is that it was designed to operate as an extension of existing networks (i.e., IP networks); any application developed for CDPD can be adapted to run on any IP-based network. The complete network specification for CDPDincluding architecture, airlink, network interfaces, encryption, authentication, network management, and securityis defined. Throughput is nominally 19.2Kbps, but 9.6Kbps is more common. CDPD looks like TCP/IP, which gives it some advantages, but it does require a specialized subscriber unit.

Figure 14.2 shows a CDPD network. A mobile user has a CDPD subscriber device, typically a proprietary modem provided by the network operator. Incorporated into the base station are elements such as a CDPD mobile data base station and a CDPD mobile data intermediate system (i.e., a router). The voice calls are switched out over the telco network, and the data traffic is sent over the CDPD router network. 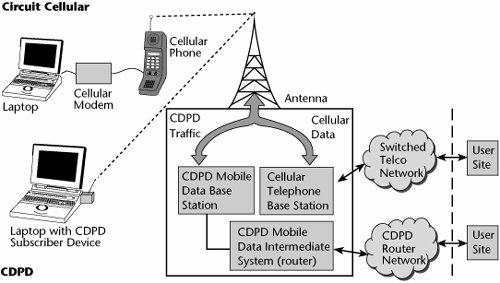 Packet radio data networks are an offshoot of Specialized Mobile Radio (SMR). They use licensed bandwidth and are built specifically for two-way data, not for voice communications. The data rates supported by packet radio range up to 19.2Kbps, but the norm is 9600bps. The best applications for packet radio include sessions that are short, as in Short Messaging Service (SMS), transaction processing, and, in some cases, e-mail; packet radio is not a solution for bulk file transfers or client/server interactions. The key applications for packet radio include dispatching, order processing, airline reservations, financial services and banking, lottery, remote database access, messaging, point-of-sale, and telemetry.

In the packet radio data network configuration shown in Figure 14.3, the end user has a mobile unit, a laptop, and a proprietary packet modem that provides access to the private packet base station. A private packet network is the backbone, and it may interface into public data networks or be used on a private basis, for a company's own enterprise network. 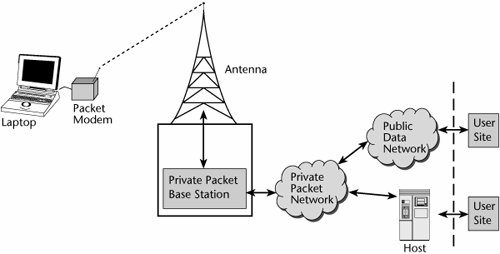 Among the packet data options is Mobitex, a paging network developed by Ericsson (www.ericsson.com). It is an open standard for dedicated wireless data and emphasizes reliability and its use in safety-type applications. It is therefore mainly used by military, police, firefighters, and ambulance services. Around 150 such organizations use Mobitex, which offers a highly reliable communications channel for data where communication must never fail. Mobitex is a trunked radio system based on X.25, originally operating at 8Kbps and now ranging up to 19.2Kbps, and it is built using a fault-tolerant architecture. It is a packet-switched, narrowband, data-only technology mainly for short-burst data. It is ideally suited for applications such as interactive messaging, e-mail, machine-to-machine, telematics/positioning, and forms-based applications. Mobitex channels are 12.5KHz wide. All Mobitex networks operate in one of five frequency families: 80MHz, 160MHz, 400MHz (generally between 415MHz and 430 MHz), 800MHz (generally between 820MHz and 870MHz), or 900MHz (generally between 895MHz and 910 MHz). Frequencies and channels are generally assigned by national government authorities.

Mobitex is offered on more than 30 networks on five continents, but by 2005 it was used primarily in the United States and Canada. European Mobitex networks withered in the face of the overwhelming success of GSM. However, now in its fifth major revision, Mobitex continues to be improved and enhanced for demanding professional use, and the Mobitex Association (www.mobitex.org) reported that its 2005 conference was a great success. The Mobitex system equipment, terminal equipment, and network architecture are continually being enhanced to meet and adapt to changing market needs. The detailed product roadmap extends five years into the future and includes a number of important hardware and software development projects that will result in improved performance, decreased investment, and cost-efficient operations for Mobitex operators. Mobitex is also being used in combination with GPRS, WLAN (802.11), satellite, and CDMA, and we are seeing new products such as dual-mode modems, gateway products, and software that support this development. There are also several new Bluetooth-enabled products and applications for Mobitex.