As you've read many times in this book, fiber is an area of rapid evolution. Few other media options promise to offer the capacities of fiber. Where its deployment is possible, fiber is the clear-cut best solution. Fiber can be used on its own or in conjunction with twisted-pair, coax, and wireless to provide broadband access.

FTTx (fiber-to-the-x, where x means premises, curb, building, or home) solutions are gaining momentum as the best means for offering bundled services. Fiber-to-the-node (FTTN) is a solution in which fiber is run very close to the hometo the curband coax runs from the curb to the home. In addition, all-fiber networks can be used to deliver broadband services. Fiber-to-the-home/fiber-to-the-premises (FTTH/FTTP) goes a step further than FTTNit brings fiber into the residence. In addition, a generation of technologies called PONs promises to dramatically reduce the cost of deploying FTTH/FTTP.

FTTx solutions involve some key considerations for providers, including existing infrastructure and geographical density. The current FTTx market is primarily composed of municipalities, utilities, smaller independent and competitive local exchange carriers, MSOs, and incumbent telcos, although it is becoming of greater interest to others, such as ISPs. Most of the sector has focused on the residential home side. On the commercial and MDU fronts, it is believed that cable operators have a keen interest in plugging fiber directly into small and medium-sized businesses and apartment buildings. Incumbent telcos are expected to warm up to FTTx technologies as cable operators achieve more success with the video, voice, and data bundling strategies.

High equipment and construction costs have long been a barrier for FTTx, but costs are declining as the technology matures. Thanks to less expensive equipment and more efficient field operations, the costs are now nearly on par with those of advanced HFC architectures. New cable designs can reduce field deployment costs. Ribbon-style cables, which eliminate the jelly found in a traditional buffer tube, cut back on the cleaning and preparation time for field technicians. This reduces cable prep time and labor costs by more than 50%. Current FTTx expense figures, per connected home, range from US$800 to US$2,000. Of course, the price depends on the technology and the footprint reality.

Because FTTx is best suited for greenfield environments (i.e., environments that lack any constraints imposed by prior work), some providers see their main market as the international marketplace, where traditional infrastructures are not in place. How deep into the network should fiber be placed, and what will be the cost of replacing existing copper with fiber? The main architectural difference between major service providers is how far to drive the fiber toward the home.

As described in the following sections, there are two main FTTx options:

The biggest benefit of FTTN is that it takes advantage of the enormous amount of existing copper. The most important challengeand disadvantageis to squeeze sufficient capacity out of that plant to deliver triple-play services (voice, data, and video services) or, more specifically, video. In order to accommodate more bits per second down the transmission path, two techniques must be applied: Increase the usable bandwidth (i.e., provide a bigger frequency band), and strive to get greater bandwidth efficiency by enhancing the signal encoding, or modulation, technique (i.e., carry more bits per second per Hertz).

In the FTTN architecture, the fiber is extended to the serving area interfacethat is, the point at which the telco's feeder cable connects to the local distribution cable (see Figure 12.6). The intended range of the copper connection is 1 mile (1.5 km), with the goal of delivering 25Mbps over that range. Two alternatives can be used to achieve this objective: bonded ADSL2+ and VDSL.

Given the 20Mbps to 30Mbps local connection supported by FTTN, not many digital video channels can be accommodated. Video over FTTN will require a new architecture to deliver high-quality multimedia content over a limited-capacity copper loop. In response to this challenge, the telcos are investigating the use of a packet-based architecture for video. Two IP video proposals are being considered at this time. One solution for packet-based video is the DSL Forum's (www.dslforum.org) IP video distribution technology. In this case, video packets are given priority based on setting the DiffServ control points in the IP headers. The other solution involves proprietary vendor-defined schemes.

FTTH/FTTP takes fiber directly to the side of each home. The selected method depends on a number of demographic and financial considerations, but FTTH/FTTP offers the greatest potential for realizing the long-term end-user service needs. Accordingly, this is the most "future-proof" of the FTTx architectures. Basically, the closer to the subscriber the fiber is, the greater the potential bandwidth and improved performance.

A number of deployment scenarios are possible for FTTH/FTTP, but today one of the most popular is the use of PONs. The advantage of PONs is a lower cost per subscriber to provision the service initially. On the other hand, as Figure 12.7 indicates, because it is a system based on sharing wavelengths, a PON limits the bandwidth available, depending on the number of subscribers sharing the fiber. In addition, because it is a passive system (i.e., it makes use of nonpowered splitters to break out individual wavelengths to each subscriber), it also faces distance limitations. (PONs are discussed in detail in the following section.)

The most common fiber implementation today is the PON, which allows multiple buildings to share one access line. A PON is basically an FTTH/FTTP arrangement in which a single optical fiber serves multiple premises (currently up to 32). It is, in essence, a point-to-multipoint configuration, which reduces the amount of fiber required. Taking advantage of WDM, PONs allow for two-way traffic on a single fiber pair by making use of one wavelength for downstream traffic and another for upstream traffic.

PONs work by using passive optical splitters to split the power of the optical signal and route it to multiple subscribers. Eliminating active components reduces the distance the signal can travel, resulting in a theoretical range of about 12 miles (20 km) for a PON.

The concept with PONs is to share one fiber channel among up to 32 customers to deliver voice, data, and potentially video. This reduces costs by distributing the costs across more endpoints and replacing expensive add/drop multiplexers (ADMs) or DWDM nodes with optical splitters and couplers at each fiber connection in the network. Downstream signals, broadcast to each premise using a shared fiber, are encrypted to prevent eavesdropping. Upstream bandwidth is allocated by assigning a time slot to each subscriber when the user has traffic to send.

As shown in Figure 12.8, the basic PON configuration includes the following components: 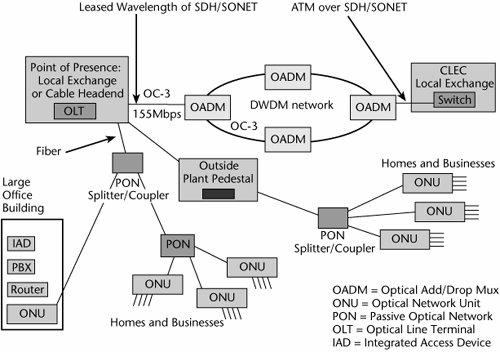 PONs bundle multiple wavelengths (up to 32) so they can be carried over a single access line from the carrier's local exchange to a manhole or controlled environmental vault (CEV) close to a group of customer sites. Passive optical splitters reside inside CEVs. As the light broadcast from the OLT hits the splitter, it is deflected onto multiple fiber connections, depending on the splitter used. (Passive means the splitters don't need any powerthey work like a prism, splitting light into the colors of the rainbowso there is nothing to wear out or go wrong.) Splitters feature 2 to 32 branches and can be positioned to create PON star, ring, or tree configurations. From the customer to the local exchange, each site is given a specific time slot to transmit, using a polling scheme.

There are three main types of PONs:

APONs, EPONs, and GPONs all operate over a single fiber and use different wavelengths for transmissions upstream (around 1,300 nm) and downstream (around 1,500 nm). Multiple users share the upstream and downstream channels. In APONs, the downstream channel operates at 155Mbps or 622Mbps, and the upstream channel operates at 155Mbps. A symmetrical 622Mbps standard is being developed. The total usable capacity is 448Mbps. APONs use a separate wavelength around 1,550 nm to carry analog video, digital video, or dedicated wavelength services. EPONs typically operate symmetrically at 1.25Gbps, with a usable capacity of 612Mbps. GPONs operate at 2.5Gbps, with a usable capacity of 2.36Gbps.

Passive optical splitters/combiners are used to split the power of the optical signal and route it to multiple customers. A separate wavelength around 1,550 nm can also be used to carry analog video, as do the HFC configurations now used in cable TV. The maximum transmission range is theoretically about 12 miles (20 km). Each splitter reduces the power of the optical signal, so the range is reduced as splitters are added.

The Future of PONs

One of the key issues related to PONs is the availability of fiber; we still face a shortage of fiber in access networks. PONs also have distance limitations due to their passive nature. Eliminating active components reduces the distance the signal can travel, resulting in a theoretical range of about 12 miles (20 km). Another key issue is that users share the bandwidth, as with cable modems.

Optimizing splitter ratios is important to reducing hardware costs and saving labor time. Remember that optical splitters are used to enable a single optical fiber to serve multiple locations. The purpose of the splitter is to divide the power of an optical signal, meaning it divides the total received light into two or more outputs. Split ratiosthat is, the number of subscribers that can be served by that single fibercan range from 2 to 32, and sometimes more. This is determined by the layout of the neighborhood, including lot sizes, home placement, total development shape and size, distance from the headend, and so on. An additional factor to consider is the proximity of homes. For example, with homes placed close to each other, the fiber loss due to the distance from the headend is not an issue. In this case, using 1 x 8 optical splitters reduces the hardware costs while maintaining a similar quality level.

With PONs it is also important to manage the fear factorthat is, to minimize the use of underground vaults and rely more on proper placement, accurate documentation, appropriate location schemes and devices, and control of the resource mapping. Up to half the cost of a PON project is in the onsite labor. Field location must be carefully managed. For example, it is important to consider that the material may not be on the site when needed, there may not be documentation of the headend or local exchange layout, project plans may be out-of-date, splice enclosures/splitters may be placed incorrectly, installation time may be incorrectly estimated, and labor needs to be overseen to ensure proper installation.

PONs significantly reduce the cost of provisioning fiber to the subscriber. They are of increasing interest to independent and local telcos, MSOs, utilities, and municipalities. However, shared channel and bandwidth limitations may impose restrictions in terms of long-term usability.