The ITU's standardization of SS7 in 1980 began the evolution toward the concept of intelligent networking. An IN includes a set of nodes that rely on widespread distribution of call-handling functions and capabilities (see Figure 4.14). Before the advent of INs, customers could have only the services and features available from their local exchanges. Their ability to demand and achieve new services from the operator was very much tied to the generation of software in the local exchange and whether it had yet incorporated the feature of interest. With INs, you can centrally place this type of service and feature logic on a node (such as an SCP), and then any switch can reach it and make use of that feature. The objective of intelligent networking was initially to ease the introduction of new services into the network. It also provided a foundation for complex services that would be required and desirable on a networkwide basis, such as the automation of the operator-assistance function. Because of INs and specialized peripheralsagain, computing systems loaded with specific softwarewe no longer have to use operators to place a credit card call or a collect call. 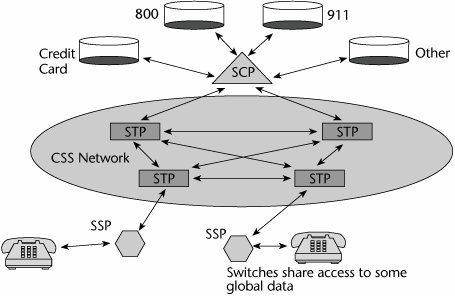 Intelligent networking gives carriers the capability to directly develop network functionality on outboard processors connected to the switches instead of being tied to their switch manufacturer and relying on the internal software. A main feature developed for intelligent networking during the early and mid-1980s was digit translation, which was applied to toll-free number translation and VPNs. Customers could develop a unique calling plan that identified their location. They could invent their own numbering plan so that they could dial numbers that were easy for them to remember, and in the network, the IN infrastructure would translate those private numbers into network physical addresses (e.g., country code, city code, area code).

Intelligent networking also enables operator-assistance features such as eliminating credit card calling and collect calling as manual fulfillment processes. In addition, intelligent networking enables the identification of primary carriers (where competition exists) so that customers can select their primary carriers. Local number portabilitywhich allows you to keep your own telephone number when you move to a new locationcan be delivered thanks to the sophistication of this IN infrastructure (and thanks to important legislation vociferously objected to by the telcos). With local number portability, although your physical address will be different at your new location, you may want to keep your old phone number so your friends and colleagues can easily recall it. But for calls made with your old number to reach your new physical address, there must be translation tables in the network that can identify your correct physical address and properly route incoming calls to you.

Around the mid-1980s, Bellcore (which is now Telcordia) pioneered the second generation of INs, called AINs (see Figure 4.15). AINs move the service logic outside the switch and onto an independent SCP. An AIN has a service-independent network architecture that allows carriers to create and uniformly support telecom services and features via a common architectural platform, with the objective of allowing for rapid creation of customizable telecommunication services. 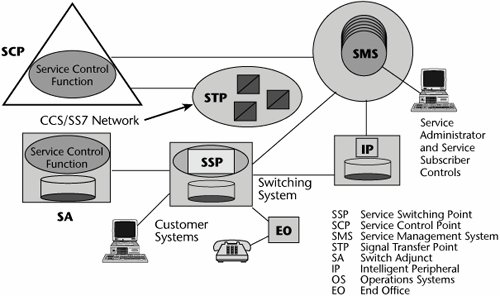 An AIN is composed of intelligent nodes that are linked via SS7 to support a variety of services and advanced call-handling features across multiple vendor domains. With the introduction of the AIN architecture, a few additional components were needed. First, the SMS is a service-creation environment that facilitates the technical and customer service representatives' interface with the provisioning and network management systems. Second, intelligent peripherals are computing platforms that serve a very specific purpose but have a very widespread demand across the network (e.g., voice recognition and voice synthesis capabilities to process third-party-assisted calls).

AINs can be used for a number of applications, including intelligent call routing, visitor location registration, virtual number service, voice-activated dialing, voice response, speech recognition, and text-to-speech conversion. The AIN infrastructure is critical in mobile communications. The reason you can roam across cellular networks is that IN databases are able to log whether you are present in your home network or in a visitor network, and they can identify whether you're authenticated to use the network. If you are authenticated to use the network, IN databases can identify which services should be made available to you. Virtual number services are also an important application of AINs; for example, a 700 number can identify and locate you within a footprint rather than requiring you to be at a specific telephone to receive a call.