The Electromagnetic Spectrum and Bandwidth

The following sections talk about bandwidth and about where the various transmission media lie within the electromagnetic spectrum.

When electrons move, they create electromagnetic waves that can propagate through free space. James Maxwell first predicted the existence of this phenomenon in 1865, and Heinrich Hertz first produced and observed it in 1887. All modern communication depends on manipulating and controlling signals within the electromagnetic spectrum.

The electromagnetic spectrum ranges from extremely low-frequency radio waves of 30Hz, with wavelengths nearly double the earth's diameter, to high-frequency cosmic rays of more than 10 million trillion Hz, with wavelengths smaller than the nucleus of an atom. The electromagnetic spectrum is depicted as a logarithmic progression: The scale increases by multiples of 10, so the higher regions encompass a greater span of frequencies than do the lower regions.

Although the electromagnetic spectrum represents an enormous range of frequencies, not all the frequencies are suitable for human communications. At the very low end of the spectrum are signals that are transmitted over 30Hz (i.e., at 30 cycles per second). One of the most important benefits of a very low frequency is that it travels much farther than a high frequency before it loses power (i.e., before it attenuates). So a 30Hz signal can travel halfway around the world before it requires some form of amplification. For example, one defense agency uses 30Hz to communicate with its submarines by using telemetry (e.g., a message that says "We're still here. We're still here" is sent, and the subs know that if they don't get that message, they'd better see what's going on).

At the high end of the electromagnetic spectrum, signals travel over a band of 10 million trillion Hz (i.e., 1022Hz). This end of the spectrum has phenomenal bandwidth, but it has its own set of problems. The waveforms are so miniscule that they're highly distorted by any type of interference, particularly from environmental sources such as precipitation. In addition, the faster the bit rate, the more power consumed. For example, submarine fiber-optic cables require approximately 20,000 watts of power on each end to work. Furthermore, higher-frequency waveforms such as x-rays, gamma rays, and cosmic rays are not very good to human physiology and therefore aren't available for us to use for communication at this point.

Because of the problems with very low and very high frequencies, we primarily use the middle of the electromagnetic spectrum for communicationthe radio, microwave, infrared, and visible light portions of the spectrum. We do this by modulating the amplitudes, frequencies, and phases of the electromagnetic waves. Bandwidth is actually a measure of the difference between the lowest and highest frequencies being carried. Each of the communications bands offers differing amounts of bandwidth, based on the range of frequencies they cover. The higher up in the spectrum, the greater the range of frequencies involved. However, this is largely a licensing issue; the spectrum is controlled and allocated by government agencies, such as the Federal Communications Commission (FCC; www.fcc.gov), Canadian Radio-television and Telecommunications Commission (CRTC; www.crtc.gc.ca), and International Telecommunication Union (ITU; www.itu.int).

Figure 1.6 shows the electromagnetic spectrum and where some of the various transmission media operate. Along the right-hand side is the terminology that the ITU applies to the various bands: Extremely low, very low, low, medium, high, very high (VHF), ultrahigh (UHF), superhigh (SHF), extremely high (EHF), and tremendously high (THF) frequencies are all various forms of radio bands. And then we move into the light range, with infrared and visible light. You can see just by the placement of the various transmission media that not all are prepared to face the high-bandwidth future that demanding advanced applications (such as streaming media, e-learning, networked interactive games, interactive TV, telemedicine, metacomputing, and Web agents) require. 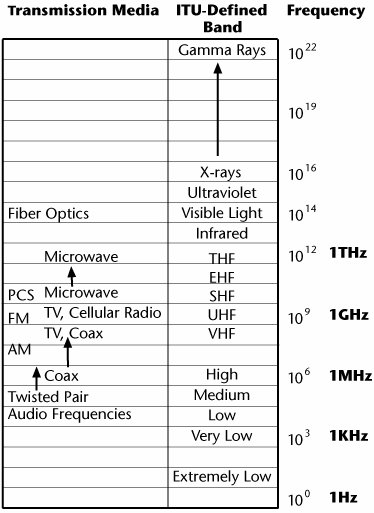 You can manipulate frequency, amplitude, and phase in order to generate a one and a zero. Hence, you can represent digital information over the electromagnetic spectrum, for example, by sending ones at a high frequency and zeros at a low frequency. Devices that change the frequency in order to carry information are called frequency-modulated devices. You can also modulate amplitude by sending ones at a high amplitude or voltage and zeros at a low amplitude. A complementary receiving device could then determine whether a one or a zero is being sent. As yet another example, because the phase of the waveform refers to shifting where the signal begins, you could have ones begin at 90 degrees and zeros begin at 270 degrees. The receiving device could discriminate between these two bit states (zero versus one) based on the phase of the wave as compared to a reference wave.

Twisted-pair cable, which was the original foundation of the PSTN (telephony) network, has a maximum usable bandwidth of about 1MHz. Coax, on the other hand, has greater capacity because it can carry up to a total of 1GHz of frequency spectrum. Within the radio range, microwave is the workhorse of the radio spectrum. It provides 100GHz to operate with. In comparison, fiber optics operates over a band of more than 200THz (terahertz). As we see increasingly more bandwidth-hungry applications, we'll need to use fiber optics to carry the amount of traffic those applications generate.

Of course, it is vital to note that the physical territory ultimately dictates which medium makes the most sense; for example, in a nation like Indonesia, composed of more than 10,000 islands, pulling fiber cable is not practical, so wireless presents a much more cost-effective solution, despite performance problems due to weather issues. Twisted-pair will see little use with the future application set. Although there have been some vast improvements in carrying high bit rates over very-short-distance twisted-pair, such as VDSL (covered in Chapter 12, "Broadband Access Alternatives"), this is not a long-term solution; it is simply a way to extend the useful life of an embedded base of copper. This is why you don't see any new housing developments being wired with copper; instead, telcos and even developers are engaged in bringing fiber to and into the home. And of course, wireless will also figure prominently in enabling mobility. Figure 1.8 plots various telecommunications devices on the electromagnetic spectrum. 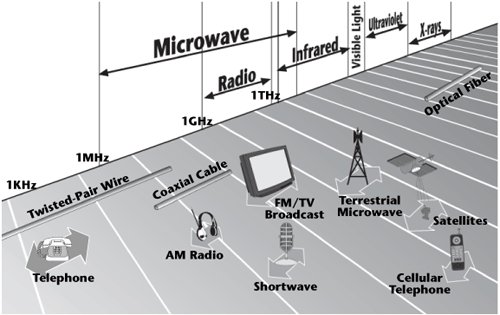 As mentioned earlier, bandwidth is the range of frequencies that make up a signal. (Note that the term is today commonly used to refer to data rate, even though that is not the technically correct definition.) There are three major classes of bandwidth in telecommunications networks: narrowband, wideband, and broadband.

Narrowband can accommodate up to 64Kbps, which is also known as the DS-0 (Digital Signal level 0) channel. This is the fundamental increment on which digital networks were built. Initially, this metric of 64Kbps was derived based on our understanding of what it would take to carry voice in a digital manner through the network. If we combine these 64Kbps channels, we can achieve wideband transmission rates.

Wideband is defined as accommodating n x 64Kbps, up to approximately 45Mbps. A range of services are provisioned to support wideband capabilities, including T-carrier, E-carrier, and J-carrier services. These are the services on which the first generation of digital hierarchy was built.

T-1, which offers 1.544Mbps, is a North American standard. T-1 is used in the United States and in some overseas territories, such as South Korea and Hong Kong. E-1, which provides a total of 2.048Mbps, is specified by the ITU. It is the international standard used throughout Europe, Africa, most of Asia-Pacific, the Middle East, and Latin America. J-carrier is the Japanese standard, and J-1 offers 1.544Mbps.

The future hierarchy rests on broadband capacities, and broadband can be defined in different ways, depending on what part of the industry you're talking about. Technically speaking, the ITU has defined broadband as accommodating anything over 2Mbps. But this definition was created in the 1970s, when 2Mbps seemed like a remarkable capacity.

Given today's environment, for wireline facilities, it may be more appropriate to think of broadband as starting where the optical network infrastructure starts. Synchronous Digital Hierarchy (SDH) and Synchronous Optical Network (SONET) are part of the second generation of digital hierarchy, which is based on fiber optics as the physical infrastructure. (SDH and SONET are discussed in detail in Chapter 4.) The starting rate (i.e., the lowest data rate supported) on SDH/SONET is roughly 51Mbps. For the wireline technologiesthose used in the core, or backbone, network51Mbps is considered the starting point for broadband. In the wireless realm, though, if we could get 2Mbps to a handheld today, we'd be extremely happy and would be willing to call it broadband. So remember that the definition of broadband really depends on the situation. But we can pretty easily say that broadband is always a multichannel facility that affords higher capacities than the traditional voice channel, and in the local loop, 2Mbps is a major improvement.