An analog waveform (or signal) is characterized by being continuously variable along amplitude and frequency. In the case of telephony, for instance, when you speak into a handset, the air pressure changes around your mouth. Those changes in air pressure fall onto the handset, where they are amplified and then converted into current, or voltage fluctuations. Those fluctuations in current are an analog of the actual voice patternhence the use of the term analog to describe these signals (see Figure 1.9). 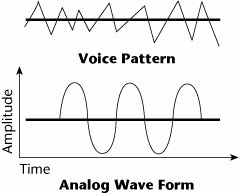 When it comes to an analog circuitwhat we also refer to as a voice-grade linewe need to define the frequency band in which it operates. The human voice, for example, can typically generate frequencies from 100Hz to 10,000Hz, for a bandwidth of 9,900Hz. But the ear does not require a vast range of frequencies to elicit meaning from ordinary speech; the majority of sounds we make that constitute intelligible speech fall between 250Hz and 3,400Hz. Therefore, the phone company typically allotted a total bandwidth of 4,000Hz for voice transmission. Remember that the total frequency spectrum of twisted-pair is 1MHz. To provision a voice-grade analog circuit, bandwidth-limiting filters are put on that circuit to filter out all frequencies above 4,000Hz. That's why analog circuits can conduct only fairly low-speed data communications. The maximum data rate over an analog facility is 33.6Kbps when there are analog loops at either end.

Analog facilities have limited bandwidth, which means they cannot support high-speed data. Another characteristic of analog is that noise is accumulated as the signal traverses the network. As the signal moves across the distance, it loses power and becomes impaired by factors such as moisture in the cable, dirt on a contact, and critters chewing on the cable somewhere in the network. By the time the signal arrives at the amplifier, it is not only attenuated, it is also impaired and noisy. One of the problems with a basic amplifier is that it is a dumb device. It knows only how to add power, so it takes a weak and impaired signal, adds power to it, and brings it back up to its original power level. But along with an increased signal, the amplifier passes along an increased noise level and adds its own internal noise. So in an analog network, each time a signal goes through an amplifier, it accumulates noise. After you mix together coffee and cream, you can no longer separate them. The same concept applies in analog networks: After you mix the signal and the noise, you can no longer separate the two, and, as a result, you end up with a lot of noise and very high error rates.

Digital transmission is quite different from analog transmission. For one thing, the signal is much simpler. Rather than being a continuously variable waveform, it is a series of discrete pulses, representing one bits and zero bits (see Figure 1.10). Each computer uses a coding scheme (called a collating sequence) that defines what combinations of ones and zeros constitute all the characters in a character set (e.g., lowercase letters, uppercase letters, punctuation marks, digits, keyboard control functions).

Because a digital signal is easier to reproduce than an analog signal, we can treat it with a little less care in the network. Rather than use dumb amplifiers, digital networks use regenerative repeaters, also referred to as signal regenerators. As a strong, clean, digital pulse travels over a distance, it loses power, similar to an analog signal. The digital pulse, like an analog signal, is eroded by impairments in the network. But the weakened and impaired signal enters the regenerative repeater, where the repeater examines the signal to determine what was supposed to be a one and what was supposed to be a zero. The repeater regenerates a new signal to pass on to the next point in the network, in essence eliminating noise and thus vastly improving the error rate.

Table 1.1 summarizes the characteristics of analog and digital networks.

Today we don't have all-digital or all-analog networks; we have a mix of the two. Therefore, at various points in a network, it is necessary to convert between the two signal types. The devices that handle these conversions are codecs and modems (see Figure 1.11). 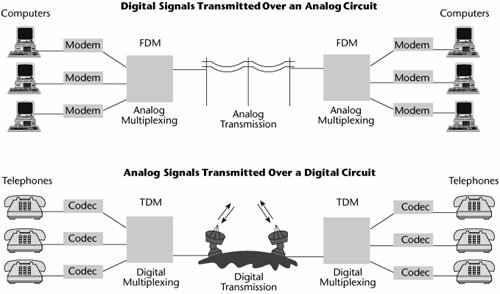 A codec (which is a contraction of coderdecoder) converts analog signals into digital signals. There are different codecs for different purposes. For the PSTN, for example, there are codecs that minimize the number of bits per second required to carry voice digitally through the PSTN. In cellular networks, because of the constraints and available spectrum, a codec needs to compress the voice further to get the most efficient use of the spectrum. Codecs applied to video communication also require very specific compression techniques to move those high-bandwidth signals over what may be somewhat limited channels today.

A modem (which is a contraction of the terms modulate and demodulate) is used to infuse digital data onto transmission facilities and vice versa. Some modems are designed specifically to work with analog voice-grade lines. There are also modems designed to work specifically with digital facilities (e.g., ISDN modems, ADSL modems). A modem manipulates the variables of the electromagnetic wave to differentiate between the ones and zeros.

Although it is possible to convert between analog and digital networks, in general, conversions are a weak link in a network. A conversion is a point at which network troubles can occur, an opportunity for errors and distortions to be introduced. Therefore, ideally, we want to move toward an end-to-end digital and end-to-end optical environment. This means that nowhere between the transmitter and the receiver do signal conversions need to be done.