The SS7 network acts as the backbone for the PSTN and INs; it provides access to the IN features, allows for efficient call setup and teardown, and interconnects thousands of service providers under one common signaling network. The capability to communicate with SS7 networks is essential for all service providers because SS7 networks give next-generation local exchange carriers access to an existing base of service features. Operators and service providers have begun the migration to IP-based network architecture (see Chapter 8, "The Internet and IP Infrastructures"). However, no one expects an overnight transition; instead, we need to find a way to support both traditional circuit-switched and contemporary IP-based services on a single network infrastructure. There is little doubt that circuit-switched services will continue to have a fruitful life for some years to come, but they will have to increasingly live with IP services, so the obvious solution is a hybrid architecture that enables a low-risk evolution while allowing for new service offerings.

There are now new genres of equipment and protocols to ensure that packet-based telephony switching gateways can in fact support key legacy services and signaling features. For example, a next-generation gateway switch supports the traditional Class 4, or toll switch, services and the Class 5, or local exchange switch, services. It is designed to support a wide variety of trafficdata, voice, fax, multimedia, and other emerging media typesover a data backbone. The next-generation gateway switch provides seamless interoperability between the circuits that network the PSTN and packet-switching networks, such as IP backbones, ATM networks, Frame Relay networks, and emerging MPLS networks. We can use these gateway switches to connect with the SS7 network and to handle the IP services that are so popular today. These gateway switches can support a variety of telephony signaling protocols (e.g., H.323, Session Initiation Protocol [SIP], and Media Gateway Control Protocol [MGCP]) for communicating with the underlying SS7 architecture. (Chapter 9, "IP Services," discusses all the call control signaling standards.)

As shown in Figure 4.16, there are different forms of these next-generation gateway switches for different purposes. In the bottom right of Figure 4.16 is an ILEC and its resident circuit-switched network, which is a series of Class 5 offices at the perimeter. These Class 5 offices are connected to the SS7 network or the STPs via A links. These Class 5 offices then connect into a CLEC's packet-switched network, and their first point of interface is a gateway switch. Among other things, this gateway switch is responsible for digitizing and packetizing the voice to prepare it for transport over the packet-switched network. The CLEC's packet-switched network also has an SS7 gateway, which is capable of communicating with the underlying ILEC's SS7 network so that it can map the appropriate IP addresses associated with the destination telephone number, which is served by a given destination media gateway. The next-generation gateway switch, therefore, provides a means to seamlessly interoperate between two very important and existing infrastructures. Signaling gateways allow both legacy and new equipment to seamlessly operate over high-bandwidth, scalable, and available IP-based core networks instead of taxing the TDM-based legacy SS7 network. 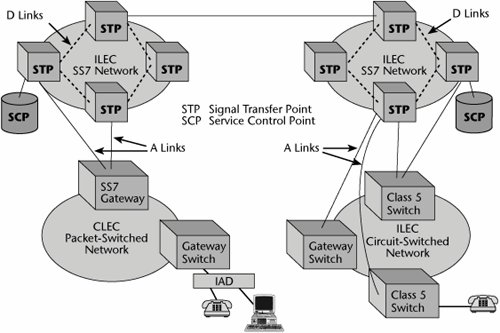 Figure 4.17 is an end-to-end view of a next-generation network. It shows an interconnected environment between the legacy circuit-switched network and the emerging packet-based networks. A subscriber at the customer premises (e.g., a residence, a business site) is connected to the local exchange, known as the end office, by access lines. From there, trunks link to a media gateway switch, which, through SS7 interfaces, can reach into the underlying intelligence within the SS7 network and further add the necessary information to process the call as requested. The call then goes out on a packet basis throughout a series of switches or routers (depending on what the provider is using as the backbone) and reaches a destination media gateway switch that unpackages the voice, undigitizes it, and delivers it to the destination phone. 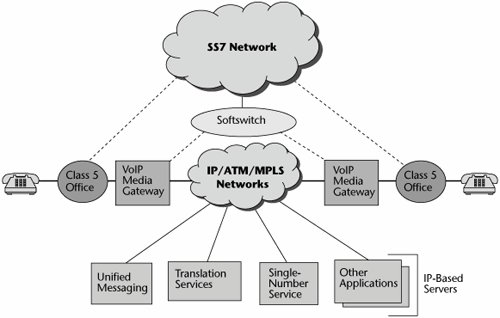 Next-Generation Networks and the PSTN

Although tremendous amounts of time and money have been spent in developing the intelligence that provides the PSTN telephony features we know today, operators are seeking ways to consolidate voice and data traffic, platforms, and services in order to reduce the operational, maintenance, and initial costs of the network. IP-based networks are now considered the best path to building converged networks from which integrated services can be offered. There are many benefits associated with an IP network, including less expensive equipment, easier deployment, higher bandwidth, and the opportunity for many enhanced services. These new IP-based services include unified messaging, IP telephony, IP-based virtual private networks (IP VPNs), IPTV, and mobile IP, among many others. Both fixed and mobile operators are choosing to deploy such all-IP infrastructures, which include support for SS7 signaling protocols.

Given the substantial presence of circuit-switched networks that continue to deliver high-quality voice and data connections and still have plenty of useful life, it is clear that an integration solution is required to interconnect the PSTN and the growing number of IP networks. The charter of the IETF Signaling Transport (SIGTRAN) Working Group, established in 1999, is to develop and standardize the messages and protocols necessary to carry mobile and PSTN signaling over IP networks (i.e., SS7 over IP). The SIGTRAN Working Group has defined a new architectural model that enables the evolution to an all-IP network. This new model defines the appropriate protocols required for converging the PSTN and IP networks. The SIGTRAN protocols provide all the functionality needed to support SS7 signaling over IP networks, including flow control; in-sequence delivery of signaling messages within a single control stream; identification of the originating and terminating signaling points; identification of voice circuits; error detection, retransmission, and other error-correcting procedures; recovery from outages of components in the transit path; control to avoid congestion on the Internet; detection of the status of peer entities (i.e., in service, out of service); support for security mechanisms to protect the integrity of the signaling information; and extensions to support security and future requirements.

The characteristics of next-generation networks are very different from what the traditional PSTN was aiming at. Next-generation networks are not designed for just voice, data, or video. They are designed for multimedia and streaming media, and this requires capacities that are broadband in nature, networks that are engineered for extremely low and controllable latencies, and infrastructures that provide the ability to administer quality of service on a very granular level.

This book has talked about the explosion of bandwidth that's occurring because of developments in optics. As the availability of bandwidth increases, bandwidth becomes cheaper and cheaper. When bandwidth becomes very inexpensive or almost free, a carrier needs to find other ways to generate revenue, such as by offering a large variety of value-added services (e.g., reliability, priority, customer service, and encryption or security). But to administer all these services and to provide differentiated pricing, which can result in handsome revenue streams, there must be mechanisms for controlling, monitoring, and billing.

The next-generation network infrastructure has a number of important features that are covered in detail in later chapters: