An antenna is a device through which radio frequency (RF) energy is coupled from the transmitter to the outside world and, in reverse, to the receiver from the outside world. Antennas have often been the most neglected of the components in a wireless system, yet they really are the most important part of a radio system. The manner in which energy is collected from and distributed into the surrounding air greatly influences the bandwidth efficiency, cost, and service quality of wireless networks. Antenna design is as critical as the prevailing radio conditions.

The function of an antenna is to collect or radiate electromagnetic waves. An oscillating electric field from the radio's transmitter is fed to the antenna, creating an oscillating magnetic field. Radio transmission is the propagation of electromagnetic waves through space. The electromagnetic waves create an electric current in the receiving antenna, which is then sent to the radio receiver. Antennas can be designed to handle a wide range of frequencies and power levels. They can also be designed to partially reject interference and signals coming from a direction other than that intended or, on the other hand, to focus energy in a particular direction when transmitting.

The first important consideration in antenna selection is gain. Antennas, as passive devices, do not create radio energy; they focus it. Focusing the energy into a narrower beam causes an increase in power, which is referred to as antenna gain. There are two main types of antennas:

The past decade or so has brought a revolution in the way we communicate. The Internet and multimedia applications have fueled an enormous appetite for high-speed and high-bandwidth facilities, while mobile phones and other wireless devices have created a growing desire for ubiquitous connectivity for a large number of subscribers. Needless to say, the near future must promise a new generation of wireless high-bit-rate devices. However, we have a basic obstacle to overcome: the relatively low bit rate that current wireless systems support, limited by the information capacity between a transmitter and a receiver. This information capacity is defined by the famous formula called Shannon's Law (discussed later in this chapter). With the overcrowded frequency spectrum and limitations on maximum power, we are challenged in how to increase the information capacity.

Since 1996, multiantenna arrays have been suggested as a way to stretch the limit of Shannon's Law, making better use of the available spectrum and mitigating the effects of various impairments. It is increasingly clear that multiantenna technology is going to play an essential role in the wireless communications of the future. These newer antenna approaches include phased-array antennas, magnetic polarization antennas, and MIMO antennas, which are all described in the following sections.

The simplest multiantenna array is a phased-array antenna, also called a steered-beam antenna. Intelligent antennas based on phased-array technology can be used to mitigate the effects of multipath and other environmental interactions, such as proximity to metal. A phased-array antenna is usually implemented as a flat panel with a relatively large number of active antenna elements (see Figure 13.2). The elements can be electronically steered to focus energy from the antenna in a given direction, and the steering can even be dynamic to allow for some degree of tracking of a mobile client. Phased-array antennas achieve directional selectivity by electronically imposing minute delays on the signals, referred to as a phase shift, moving from (or to) different parts of the array. Arrays can be programmed to send a grid of electronically formed radio beams to track moving targets or, alternatively, to receive signals from only certain directions. 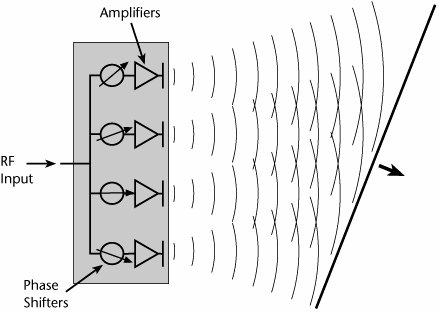 Beam steering and intelligent antenna techniques increase the signal directed toward an intended receiver and reduce the reception of stray signals intended for other targets, which appear at the receiver as noise. Phased-array antennas enable 100-fold spectrum reuse (i.e., a capacity increase by a factor of 100) and may enable us to reach 1,000-fold reuse. Phased arrays have the additional advantage of being flat, which makes them more suitable than other antennas for many applications, particularly mobile installations.

Magnetic polarization antennas can be used to increase bandwidth. They work by reusing the same frequency at different polarizations. Waves vibrating in perpendicular directions cannot interfere with each other, so the same frequency can be used twice in the same place. Polarization is also applied to the magnetic waves, which are transmitted alongside their electric counterparts and have very similar properties. Different combinations of these polarizations make a sixfold capacity increase possible, and this can be achieved by simply upgrading the base stations to fit the extra antennas.

A recent advance in antenna design is the multiple-input multiple-output (MIMO) system, which is one of the key building blocks for next-generation wireless access. MIMO is an advanced antenna technology that can carry several times more data traffic than today's most advanced 3.5G networks (which are discussed in Chapter 14). MIMO enables a network to quickly deliver multimedia content. For example, MIMO enables a 1MB picture to be downloaded in a second and a 60MB video to be downloaded in a minute.

MIMO creates multiple parallel data streams between the multiple transmit and receive antennas. MIMO exploits phenomena such as multipath propagation to increase throughput, or reduce bit error rates, rather than attempting to eliminate the effects of multipath. It uses the multipath phenomenon to differentiate the separate signal paths from each MIMO antenna. (Telephony Online's article "Building Future Networks with MIMO and OFDM," at http://telephonyonline.com/wireless/technology/mimo_ofdm_091905/, provides a good graphic of MIMO antennas.)

MIMO is a key technology associated with most of the advanced and emerging wireless systems, including 3.5G and 4G. MIMO will also be used by IEEE 802.11n, the high-throughput 100Mbps WLAN standard expected to be finalized in 2007. By employing MIMO, 802.11n will offer up to eight times the coverage and up to six times the speed of current 802.11g networks. MIMO has also recently been added to the latest draft version of Mobile WiMax, described in IEEE 802.16e.

A conventional radio has one input, a transmit antenna, and one output, a receive antenna. A MIMO system uses at least two transmit antennas, working simultaneously in the service of a single logical channel, and at least two receive antennas at the other end of the intended connection. In reality, the number of receive antennas in a MIMO system is usually greater than the number of transmit antennas, and performance generally improves with the addition of more receive antennas. A MIMO system uses its multiple antennas to simultaneously transmit data to the receivers in small pieces, and the receivers then process the data flows and put them back together. This process, called spatial multiplexing, proportionally boosts the data transmission speed by a factor equal to the number of transmitting antennas (e.g., using four antennas increases the data rate by four times). In the ideal case, the throughput will be increased n-fold, where n represents the number of spatial channels in use. In addition, because all data is transmitted both in the same frequency band and with separate spatial signatures, this technique uses spectrum very efficiently.

MIMO can be combined with Orthogonal Frequency Division Multiplexing (OFDM; discussed later in this chapter) to take advantage of the multipath properties of environments by using base station antennas that do not have line-of-sight (LOS) functionality. MIMO-OFDM allows service providers to deploy a broadband wireless access (BWA) system that has non-line-of-sight (NLOS) functionality, which is a tremendous benefit for wireless communications.