The signaling system is the nervous system of the network. A great deal of information needs to pass back and forth between the network elements in the completion of a call and also in the servicing of specialized features. Four main types of signals handle this passing of information:

There are various start standards for digital subscriber signaling, and they are defined in accordance with the service being provided.

Interoffice signaling has evolved through several generations of signaling approaches. In the first generation, called per-trunk signaling, the complete pathall the way to the destination pointis set up in order to just carry the signaling information in the first place (see Figure 4.11). This method uses trunks very inefficiently; trunks may be put into place to carry 20 or 30 ringing tones, but if nobody is on the other end to take that call, the network trunk is being used but not generating any revenue. Also, when a call is initiated and begins to progress, you can no longer send any other signaling information over that trunk; for instance, passing a call-waiting tone would not be feasible.

We have moved away from the per-trunk signaling environment to what we use todaycommon-channel signaling (CCS; see Figure 4.12). You can think of CCS as being a separate subnetwork over which the signaling message flows between intelligent networking components that assist in the call completion and in the delivery of the service logic needed to deliver the requested feature. Today, we predominantly use the ITU-T standard SS7 for CCS. SS7 refers to a group of telephony signaling protocols used to set up the majority of the world's PSTN telephone calls. While it is generally referred to as SS7, in North America it is also sometimes called CCS7 for Common Channel Signaling System 7, and in Europe, particularly the United Kingdom, it is referred to as C7 (for CCITT 7). 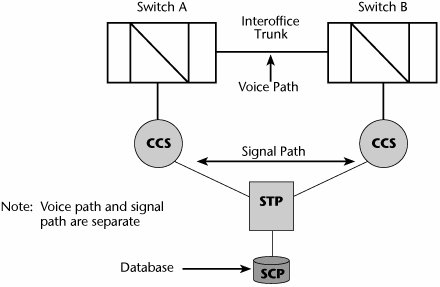 SS7 is critical to the functioning and operation of the modern network. With SS7, a packet data network overlays and controls the operation of the underlying voice networks; signaling information is carried on an entirely different path than voice and data traffic. Signaling does not take a great deal of time, so it is possible to multiplex many signaling messages over one channeland that's why the signaling system is a packet network. The signaling system takes advantage of the efficiencies of statistical multiplexing for what is essentially bursty data. The SS7 signaling data link is a full-duplex digital transmission channel that operates at either 56Kbps or 64Kbps, depending on the standards under which the network is operating (e.g., T-carrier and J-carrier operate at 56Kbps, E-carrier operates at 64Kbps).

SS7 is an entire architecture that performs out-of-band signaling (i.e., signaling in which the conversation and the signaling take place over different paths) in support of the information-exchange functions necessary in the PSTN, such as call establishment, billing, and routing. Database access messages convey information between toll centers and centralized databases to permit real-time access to billing-related information and other services. The SS7 architecture defines the procedures for the setup, ongoing management, and clearing of a call, and it enables the passing along of customer-related information (e.g., the identity of the caller, the primary carrier chosen) that helps in routing calls. The efficiency of the network also results in faster call setup times and provides for more efficient use of the circuits when carrying the voice or data traffic. In addition, SS7 supports services that require signaling during a call as it is occurringnot in the same band as the conversation.

SS7 permits the telephone company to offer one database to several switches, thereby freeing up switch capacity for other functions, and this is what makes SS7 the foundation for intelligent networks (INs) and advanced intelligent networks (AINs). (INs and AINs are discussed later in this chapter.) It is also the foundation for network interconnection and enhanced services. Without SS7, we would not be able to enjoy the level of interoperability we have today. SS7 is also a key to the development of new generations of services on the Internet, particularly those that support traditional telephony services. To be able to accommodate features such as call forwarding, call waiting, and conference calling, you must be able to tap into the service logic that delivers those features. Until quite recently, the Internet has not been able to do this, but the year 2000 saw the introduction of SS7 gateways, which allow an interface between circuit-switched networks (with their powerful SS7 infrastructure) and the emerging packet-switched networks that need to be capable of handling the more traditional type of voice communications on a more cost-effective basis.

As Figure 4.13 shows, there are three prerequisite components in the SS7 network: 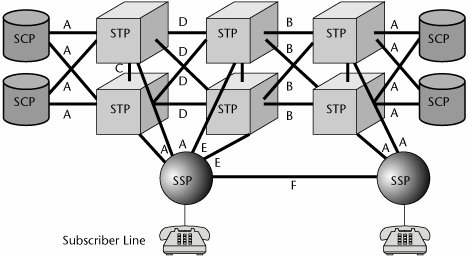 If a network loses its signaling system, it loses the capability to complete calls, as well as to do any form of billing or passing along of management information. This makes SS7 critical. The SS7 signaling data link, as mentioned earlier in the chapter, is a full-duplex digital transmission channel that operates at either 56Kbps or 64Kbps. A variety of other SS7 links are defined as well, and each has specific uses within the signaling network: