Political and Regulatory Forces in Telecommunications

New developments always bring politics with them. Different groups vie for money, power, the ability to bring new products to market first and alone, and the right to squash others' new ideas. A prominent characteristic of the telecommunications sector is the extent to which it is influenced by government policy and regulation. The forces these exert on the sector are inextricably tied to technological and market forces.

Because of the pervasive nature of information and communications technologies and the services that derive from them, coupled with the large prizes to be won, the telecommunications sector is subject to a lot of attention from policymakers. Regulation has been a government priority since the early twentieth century. But particularly over the past 22 years or so, telecommunications policy and regulation have been prominent on the agendas of governments around the world, focusing on deregulation (Telecommunications Act of 1997) and intellectual property protection (Digital Millennium Copyright Act), which are both very important for the industry. This reflects the global trend toward liberalization, including, in many countries, privatization of the former monopoly telcos. However, interest from policymakers in telecommunications goes much deeper than this. A great deal of this interest stems from the extended reach and wide impact that information and communications technologies have. Here are some examples:

Given this background of the pervasive impact that information and communications technologies have, it is hardly surprising that they get heavy policy attention.

Although many national regulatory authorities today are separate from central government, they are built on foundations of government policy. Indeed, the very act of creating an independent regulatory body is a key policy decision. Historically, before telecommunications privatization and liberalization came to the fore, regulation was often carried out within central government, which also controlled the state-run telcos. That has changed in recent years in many, but not all, countries.

Given their policy foundation, and the fact that government policies vary from country to country and from time to time, it is not surprising that regulatory environments evolve and differ. These evolutions and international variations sometimes pose planning problems for the industry, and these problems can lead to frustrations and tensions between companies and regulatory agencies. They can also lead to disagreements between countries (e.g., over trade issues). Although moves to encourage international harmonization of regulatory regimes (e.g., by the ITU and by the European Commission) have been partially successful, differences remain in the ways in which countries interpret laws and recommendations. Moreover, given that regulations need to reflect changing market conditions and technological capabilities, it is inevitable that over time regulatory environments will change, too. So regulation is best viewed as another of the variables, such as technological change, that the telecommunications industry needs to take into account.

At the global level, a number of international bodies govern or make recommendations about telecommunications policy and regulation. In addition to the ITU and the European Commission, there are various standards bodies (discussed later in this chapter, in the section "Standards Organizations") and industry associations (e.g., the European Competitive Telecommunications Association [ECTA; www.ectaportal.com/en/], the Telecommunications Industry Association [TIA; www.tiaonline.org]). Representatives of national governments and regulatory authorities meet formally (e.g., ITU World Radio Conferences, where many countries are represented) and informally (e.g., Europe's National Regulatory Authorities [NRAs] exchange views at Independent Regulators Group [IRG] meetings). Other organizations, such as the World Trade Organization (WTO; www.wto.org) and regional bodies, also influence telecommunications policy and regulation at the international level.

At the national level, several parts of central government are generally involved, and there can sometimes be more than one regulatory body for a nation. Some of these organizations are major players; others play less prominent but nevertheless influential roles. In the United States, for example, the FCC is the national regulatory body, and public utility commissions regulate at the state level. The U.S. State Department coordinates policy regarding international bodies such as the ITU. The White House, the Department of Commerce (largely through the National Telecommunications and Information Administration [NTIA; www.ntia.doc.gov]), the Justice Department, the Trade Representative, and the Department of Defense are among the various parts of the administration that set or contribute to telecommunications policy. The U.S. Congress and the U.S. government's legislative branch also play important roles. In addition, industry associations, policy "think tanks," regulatory affairs departments within companies, telecommunications lawyers, and lobbyists all contribute to policy debates and influence the shape of the regulatory environment.

Let's look briefly at what regulators do. Again, this varies somewhat from country to country and over time. In the early years of liberalization, much time would typically be spent in licensing new entrants and putting in place regulations designed to keep a former monopoly telco from abusing its position by, for example, stifling its new competitors or by charging inappropriately high prices to its customers. Here the regulator is acting as a proxy for market forces. As effective competition takes root, the role of the regulator changes somewhat. Much of the work then typically involves ensuring that all licensed operators or service providers meet their license obligations and taking steps to encourage the development of the market such that consumers benefit.

The focus of most regulatory bodies is, or should be, primarily on looking after the interests of the various end users of telecommunications. However, most regulators would recognize that this can be achieved only if there is a healthy and vibrant industry to deliver the products and services. So while there are often natural tensions between a regulator and the companies being regulated, it is at the same time important for cooperation between the regulator and the industry to take place. In Ireland, for example, the role of the regulator is encapsulated by the following mission statement: "The purpose of the Office of the Director of Telecommunications Regulation is to regulate with integrity, impartiality, and expertise to facilitate rapid development of a competitive leading-edge telecommunications sector that provides the best in price, choice, and quality to the end user, attracts business investment, and supports ongoing social and economic growth."

Flowing from regulators' high-level objectives are a range of activities such as licensing, price control, service-level agreements, interconnection, radio spectrum management, and access to infrastructure. Often, regulatory bodies consult formally with the industry, consumers, and other interested parties on major issues before introducing regulatory changes. You can obtain a more detailed appreciation of what telecommunications regulators do and what their priorities are by looking at the various reports, consultation papers, and speeches at regulatory bodies' Web sites.

At the December 2003 World Summit on the Information Society (WSIS; www.itu.int/wsis) in Geneva, governments adopted a plan of action that called on the secretary-general of the United Nations to set up the Working Group on Internet Governance (WGIG; www.wgig.org). The WGIG's mandate was to analyze the governance of the Internet and make proposals for action, as appropriate; develop a working definition of Internet governance; identify the public policy issues involved; and advance a common understanding of the respective roles and responsibilities of the various stakeholders. The WGIG is composed of 40 individuals from government, the private sector, and civil society, appointed by U.N. Secretary-General Kofi Annan in November 2004. The WGIG report, published in June 2005, provides a working definition of Internet governance: "Internet governance is the development and application by Governments, the private sector and civil society, in their respective roles, of shared principles, norms, rules, decision-making procedures, and programmes that shape the evolution and use of the Internet" (Report of the Working Group on Internet Governance, June 2005, www.wgig.org/docs/WGIGREPORT.pdf).

Not everyone agrees with the WGIG's definition, and the heated debate continues. Regardless, the WGIG was asked to present the result of its work for the second phase of the WSIS conference held in Tunis in November 2005. A dispute over control of the Internet threatened to derail the conference. However, a last-minute decision to leave control in the hands of the U.S.-based Internet Corporation for Assigned Names and Numbers (ICANN; www.icann.org) for the time being avoided a major blowup. The participants of the November 2005 WSIS conference agreed on a compromise to allow for wider international debate on the policy principles and agreed to set up an international Internet Governance Forum (www.intgovforum.org), with a purely consultative role, to be convened by the U.N. secretary-general.

Internet governance is an area of critical concern, and you should monitor the ongoing activities of the associated groups. To understand the issues under consideration, read the complete WGIG June 2005 report (www.wgig.org/docs/WGIGREPORT.pdf). In addition, the Center for Democracy and Technology Web site (www.cdt.org/dns) explores many of the controversial issues in this area.

Networking is an international phenomenon, and recommendations must be made on how systems and networks should interoperate. Standardization within the industry is intended to perform three basic functions:

Standards bodies that make such recommendations have traditionally been active in Europe, North America, Japan, and, more and more, China. In recent years, the Internet Society (ISOC; www.isoc.org) has also become an increasingly important organization.

The second major standards body is the America National Standards Institute (ANSI; www.ansi.org), whose recommendations are followed throughout North America and in some Asian countries.

The third major body is the Telecommunications Technology Committee (TTC; http://inetserv.ttc.or.jp/e/), whose recommendations are followed in Japan.

ISOC has an agreement to work with the ITU to ensure that developments do not take place separately in evolving the PSTN versus the Internet. These organizations are working toward converging networks on the same sets of requirements and functions.

In order to make room for the manyoften conflictinginterests, the international standards-making organizations concentrate on producing base standards. These base standards contain allowable variants or options, which are defined by the implementer. By adopting any of the variants or options, the implementer complies with the standard, but there is no guarantee that the equipment will interoperate with the equipment of other vendors. This problem of interoperability and internetworking is addressed by regional and national standards bodies, often involving trade organizations and user groups. These groups adapt the international base standards as functional standards, which contain a limited number of agreed-upon allowable options. These groups also develop test specifications and methods, and independent test houses then perform the necessary conformance testing and certify products that meet the requirements. (See Figures 1.20 and 1.21.) 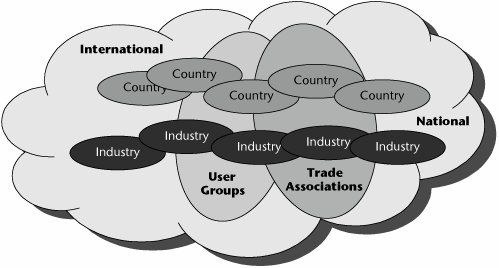 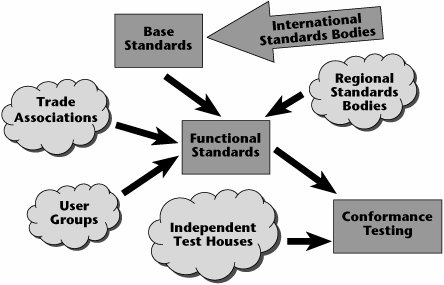 Table 1.2 lists some of the key standards organizations throughout the world.