The growing demand for mobile communications in the late 1980s was well beyond what the analog cellular infrastructure could support, so digital cellular radio was introduced to increase capacity. The basic cell in analog can handle about 60 subscribers, but in the past several years, the number of people using wireless or mobile services has grown exponentially. Digitalization is an important part of using the existing spectrum more efficiently. Another reason to switch to digital was to improve security. The industry was suffering from a tremendous amount of toll fraud. Creative thieves would stand on busy street corners, intercepting electronic identification numbers and phone numbers and then cloning chips; the next month, you'd have a bill for US$3,000 to an area you'd never called in your life. Digitizing that ID information meant that we could encrypt it to improve the security. Finally, the digital cellular infrastructure is very closely associated with intelligent networks, and that is what gives you the roaming ability to engage in conversations when you are outside the area of your own service provider.

The digital cellular architecture is very similar to the analog architecture. As you can see in Figure 14.4, a base transceiver station services each cell. But because there are more cells to address the increasing capacity (remember that the first technique for spectrum reuse is to break down the coverage areas into smaller chunks), there are more base transceiver stations. Therefore, we need an intermediate device, the base station controller, to control a group of base station transceivers. The base station controllers feed into the mobile switching center, which interfaces into the group of databases that enable roaming, billing, and interconnection, as well as interfacing to a gateway mobile switching center, which passes on the relevant billing information so that the home service provider can produce invoices. 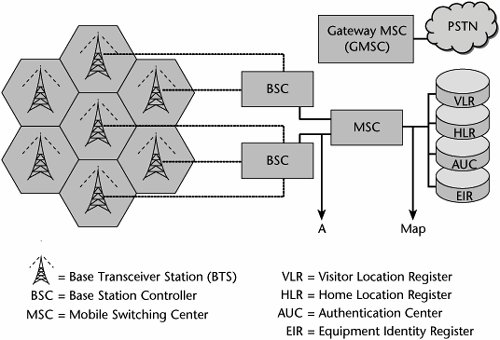 A number of databases are critical to the process of roaming:

As mentioned earlier in this chapter, one of the problems in the wireless realm is that a plethora of standards have been developed and are observed worldwide, and that creates interoperability problems. Addressing the growing need for data communications in Internet access and, in fact, the buildout of a wireless Internet requires developments on all the standards fronts. The following sections describe the major 2G standards.

One of the most popular of the digital cellular standards is Global System for Mobile Communications (GSM), which was first deployed in 1992. GSM is the technology that underpins most of the world's mobile phone networks. The GSM platform is a hugely successful wireless technology and an unprecedented story of global achievement and cooperation. GSM has become the world's fastest-growing communications technology of all time and the leading global mobile standard. As of January 2006, there were 670 commercial GSM networks operating in more than 210 countries/territories. Today, GSM technology is used by more than 20% of the world's population and almost 80% of the world's cellular market. There are close to 1,700 models of GSM phones available from more than 100 vendors. And the progress hasn't stopped there. Today's GSM platform is living, growing, and evolving and already offers an expanded and feature-rich family of voice and multimedia services.

GSM uses TDMA and FDD, and it is independent of underlying analog systems. In principle, GSM can be implemented in any frequency band. However, GSM terminals are currently available in several bands:

GSM supports 124 channel pairs with a 200KHz spacing to prevent channel interference and is based on an eight-time-slot technique, which means it can support eight callers per channel. GSM supports both voice and data, but with basic GSM, data rates reach only as high as 9600bps.

Among the features of GSM are international roaming with a single invoice and the ability to handle SMS, which can offset the need for paging by enabling text messages up to 160 alphanumeric characters in length to be sent to and from a GSM phone and an external system such as e-mail, paging, and voicemail systems. It also offers message-handling services in support of the X.400 standard, which was quite important when we were using largely proprietary e-mail systems. Now with the ubiquitous addressing scheme afforded by the Internet, it's not as important, but remember that GSM evolved quite some time ago. GSM also supports Group III fax and, very importantly, it provisions a subscriber identity module (SIM) card, which is a smart card that defines the accounting, personal details, and phone number of an individual's service. The SIM card can be used in any GSM handset to activate service, so it can help a user roam globally and still be able to maintain service. You can simply rent a handset tuned to the frequencies of the country you're visiting and use your SIM card to authorize the services and ensure that accounting occurs to the proper addressall without having to change phone numbers.

GSM offers spectrum utilization that is much better than in the analog environment, the ability to improve security by applying encryption to the digital bitstreams, and authentication and fraud prevention via SIM cards.

A variety of voice compression devicesboth half-rate coders and enhanced full-rate coders where voice quality is the preeminent concernare being developed so that we can use GSM to make more efficient use of the available spectrum. Another area of development is the ability to create closed user groups and engage in group calls. GSM now offers a number of enhanced data services, commonly referred to as 2.5G; the most important of these services are discussed later in this chapter.

Universal Wireless Communications (UWC), also known as ANSI-136, was at one time the dominant technology in North America and Latin America. As of December 2005, the total number of TDMA subscribers worldwide was approximately 68 million. In comparison, GSM has established itself as the dominant technology on a global basis, with over 1.8 billion subscribers worldwide and a growing population of subscribers in both North America and Latin America.

UWC uses TDMA and Time Division Duplex (TDD) schemes, and it offers a total of six time slots. Because it employs TDD, one time slot is required for each end of the conversation, which means it can carry three conversations per channel. It operates in the 800MHz frequency band, uses AMPS for signaling to reserve resources, and transfers speech in digital form; therefore, it is a digital overlay that is interoperable with the analog AMPS infrastructure. TDMA can now support a 10-fold increase over AMPS capacity, using microcell and hierarchical cell engineering. In terms of data capabilities, the IS-136 standards that exist today include the following:

cdmaOne is the CDMA Development Group's (CDG's; www.cdg.org) name for cellular carriers that use 2G CDMA technology (IS-95), and it offers a data rate range of 9.6Kbps to 14.4Kbps. cdmaOne describes a complete wireless system based on the TIA/EIA IS-95 CDMA standard, including the IS-95A, IS-95B, and IS-95 HDR revisions. It represents the end-to-end wireless system and all the necessary specifications that govern its operation. cdmaOne provides a family of related services, including cellular, PCS, and fixed wireless (i.e., wireless local loop).

The TIA/EIA IS-95 standard makes use of the spread spectrum technologies discussed in Chapter 13, "Wireless Communications Basics." It operates in the 800MHz and 1,900MHz frequency bands but can work on other frequency bands as well, depending on the country's standards; the appropriate radio frequency simply needs to be engineered on the front end. cdmaOne is full-duplex (i.e., FDD): 1.25MHz for the forward direction, and 1.25MHz for the reverse direction.

TIA/EIA IS-95 was first published in July 1993. The following are the key revisions to this standard:

cdmaOne offers numerous benefits to cellular operators and their subscribers, including capacity increases of 8 to 10 times that of an AMPS analog system and 4 to 5 times that of a GSM system; improved call quality, with better and more consistent sound compared to AMPS systems; simplified system planning through the use of the same frequency in every sector of every cell; enhanced privacy; improved coverage characteristics, allowing for the possibility of fewer cell sites; increased talk time for portables; and bandwidth-on-demand.

Personal Digital Cellular (PDC) is a 2G standard developed and used exclusively in Japan. It was originally defined in April 1991 by the standards body that is today known as the Association of Radio Industries and Businesses (ARIB). At its peak, PDC had more than 80 million subscribers, but with Japan's aggressive deployment of 3G mobile networks, as of December 2005, the number of PDC subscribers had dropped by nearly half, to 45.86 million.

PDC is based on TDMA and FDD schemes. It is the most spectrally efficient of the TDMA technologies, with six half-rate (or three full-rate) channels possible in a 25KHz frequency space, compared to three channels in a 30KHz space in IS-136 and eight channels in a 200KHz space for GSM. PDC can operate in two modes: full rate and half rate. Half-rate channels have reduced speech quality and data transmission rates but allow more channels to occupy the same bandwidth. Two voice codecs are supported, including a low-bit-rate 9.6Kbps codec for full-rate voice and a 5.6Kbps codec for half-rate voice. PDC is implemented in two frequency bands: the 800MHz band (specifically, 810MHz to 888MHz downlink and 893MHz to 958MHz uplink) and the 1,500MHz band (at 1,477MHz to 1,501MHz downlink and 1,429MHz to 1,453MHz uplink). The 1,500MHz band allows for the use of much smaller coverage areas, known as picocells, enabling indoor coverage in places such as subway and train stations, shopping malls, and offices. This is very important in Japan and serves as a key differentiator for PDC networks. This PCS version of PDC is also commonly known as Personal Handyphone System (PHS).

As with all other 2G technologies, PDC is steadily losing ground to more robust and high-speed 3G networks, as well as various emerging broadband wireless technologies (which are covered in Chapter 15, "WMANs, WLANs, and WPANs").