For a measure to be meaningful, we must know what is being measured and the units in which the measure is being expressed. A measure is deficient if it isn't the one that most clearly and efficiently communicates the meaning that the dashboard viewer should discern. It can be accurate, yet not the best choice for the intended message. For example, if the dashboard viewer only needs to know to what degree actual revenue differs from budgeted revenue, it would be more direct to simply express the variance as9% (and perhaps display the variance of$8,066 as well) rather than displaying the actual revenue amount of $76,934 and the budgeted revenue amount of $85,000 and leaving it to the viewer to calculate the difference. In this case, a percentage clearly focuses attention on the variance in a manner that is directly intelligible.

Figure 3-7 illustrates this point. While this graph displays actual and budgeted revenues separately, its purpose is to communicate the variance of actual revenues from the budget.

Figure 3-7. This graph illustrates the use of measures that fail to directly express the intended message. 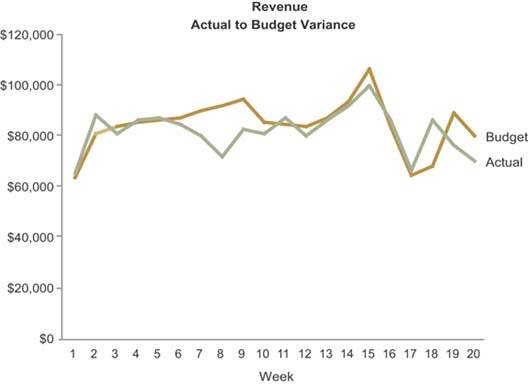 The variance, however, could have been displayed more vividly by encoding budgeted revenue as a reference line of 0% and the variance as a line that meanders above and below budget (expressed in units of positive and negative percentages, as shown on the next page in Figure 3-8). The point here is to always think carefully about the message that most directly supports the viewer's needs, and then select the measure that most directly supports that message.

Figure 3-8. This graph is designed to emphasize deviation from a target, which it accomplishes in part by expressing the difference between budgeted and actual revenues using percentages. 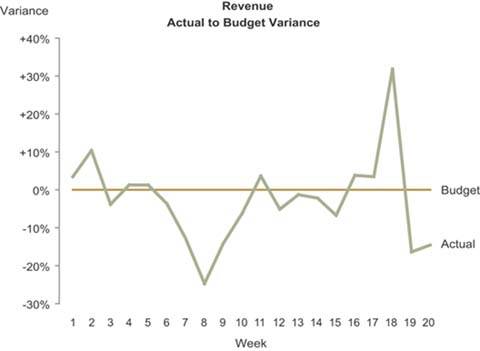