Not being one to mince words for the sake of propriety, I'll state quite directly that some dashboards are just plain ugly. When we see them, we're inclined to avert our eyeshardly the desired reaction to a screen that's supposed to be supplying us with important information. You might have assumed from my earlier warning against unnecessary decoration that I have no concern for dashboard aesthetics, but that's not the case. When a dashboard is unattractiveunpleasant to look atthe viewer is put in a frame of mind that is not conducive to its use. I'm not advocating that we add touches to make dashboards pretty, but rather that we attractively display the data itself, without adding anything that distracts from or obscures it. (We'll examine the aesthetics of dashboard design a bit in Chapter 7, Designing Dashboards for Usability.)

Figure 3-32 on the next page is a stellar example of unattractive dashboard design. It appears that the person who created this dashboard attempted to make it look nice, but he just didn't have the visual design skills needed to succeed. For instance, in an effort to fill up the space, some sections (such as the graph at the bottom right) were simply stretched. Also, although shades of gray can be used effectively as the background color of graphs, this particular shade is too dark. The image that appears under the title "Manufacturing" is clearly an attempt to redeem this dreary dashboard with a splash of decoration, but it only serves to distract from the data and isn't even particularly nice to look at. The guiding design principle of simplicity alone would have saved this dashboard from its current agony.

Figure 3-32. This is an example of a rather unattractive dashboard. 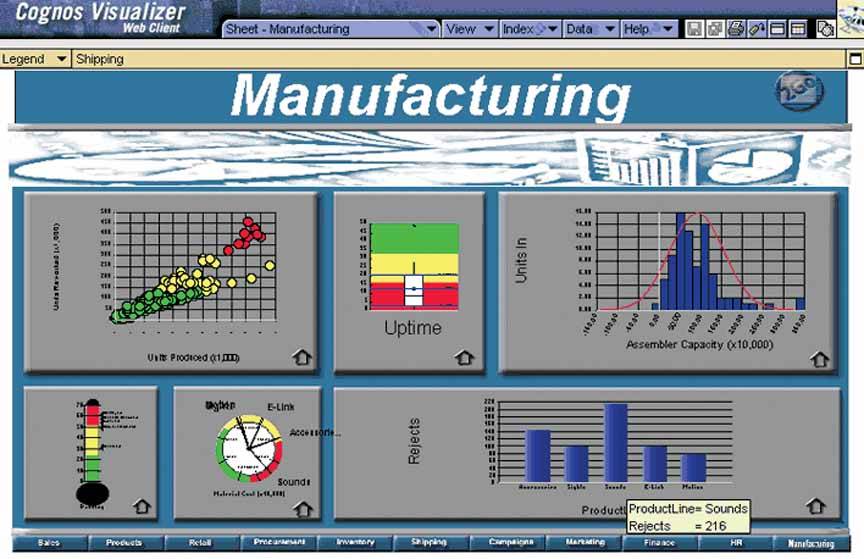 You don't need to be a graphic artist to design an attractive dashboard, but you do need to understand a few basic principles about visual perception. We'll examine these in the next chapter.