Synthesizing fire from scratch remains an advanced topic within the upper reaches of visual effects research and development. I was employed at The Orphanage during its work on Hellboy, a story featuring a leading character, Liz, whose preternatural gift is to create lots and lots of fire when upset. There was no way to use photographed fire for those shots because they required too much interaction with the rest of the scene. I was amazed at what the team responsible for these effects was able pull off.

Within After Effects, fire synthesis is way too hot to handle. If fire is at all prominent in a shot, it will require elements that come from somewhere elsemost likely, shot with a camera. Take a look at what's involved.

Figure 14.16 shows fire elements filmed for effects usage. The big challenge when compositing fire is that it doesn't scale very realistically. You might think that any fire that you shoot with a camera will look better than something you create on a computer, but a fireplace fire looks like it came straight from your hearth, no matter how it is scaled or retimed.

Figure 14.16. Fire elements are typically shot in negative (black) space, or occasionally in a natural setting requiring more careful matting. By adjusting Input Black in Levels, you can control the amount of glow coming off the fire as it is blended via Add mode, lending the scene interactive lighting for free. (Images courtesy Artbeats.) 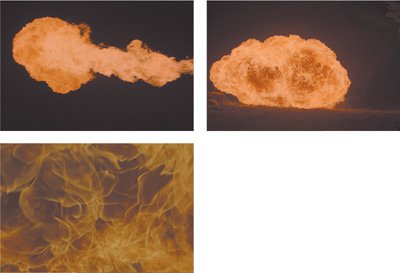 The bigger the fire you need to shoot, however, the more expensive it's likely to be because you really need the fire to be shot in negative spaceagainst a black backgroundso that you can composite it using Blending modes. Fire is obviously capable of illuminating the entire environment around it, so if that environment has specific detail, it can be all but impossible to isolate the fire from the environment.

This, then, is a case where it's worth investing in proper elements. In many cases, stock footage companies, such as Artbeats (represented on the book's CD-ROM), have anticipated your needs. Whether you require burning half-height miniature trees or a flamethrower, you're sure to find solutions for a wide variety of shots in these stock collections. As a result the scale and intensity may be more correct than what you can easily shoot on your own.

When employing a fire element shot against black (for example, the Artbeats_RF001H_fireExcerpt.mov included on the disc), it is best in 8 bpc mode to employ Screen or Add Blending modes (not a luma matte) to permit the background to be seen behind the fire. The Unmult plug-in from Knoll Light Factory, which is freeware included on the disc, will also effectively transform the black background into transparency. None of these methods by itself, however, is enough for a final composite (Figures 14.17a through d).

Figures 14.17a through d. No way would you ever want to try to luma matte fire (for example, using Extract as in 14.17a); it will never look good. Add mode tends to appear oversaturated in 8 bpc mode (b), while it and Screen (c) both are initially more transparent than they should be. Unmult gets the transparency more correct by removing black pixels, but the result lacks contrast (d). (Fire courtesy Artbeats, included on the disc.) 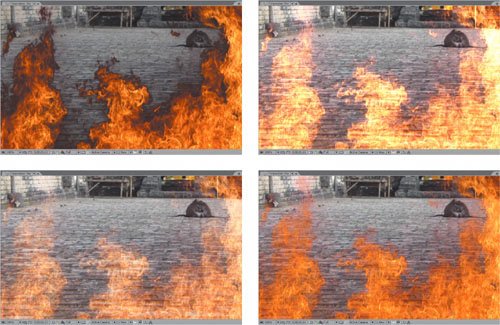 If you simply lay the fire layer over the background and apply Screen mode, the effect may look rather weak. There are several ways to strengthen it, but this is a case where linear blending and Add mode are ultimately the best combination. To firm up a fire (or flare, or other bright) element you can

However, the more elegant solution is to switch your project to 32 bpc linear (see Chapter 11, "Film, HDR, and 32 Bit Compositing," for more on this) and use Add; the result is far more natural and less of a kludge (Figure 14.18a). Additionally, as with fog elements (Chapter 15, "Learning to See"), the "secret sauce" is a Compound Blur effect on the background, using the Luminance of the fire element (Figure 14.18b).

Figures 14.18a, b, and c. Add mode behaves more naturally with linear blending via 32 bpc mode (a). To really sell the effect, however, requires the addition of a compound blur effect to the background (b). The combination is immediately more believable (c). 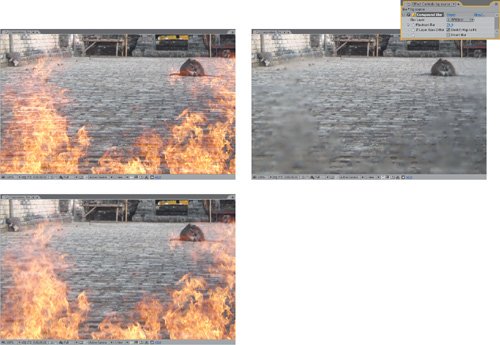 A final composition will, of course, often involve multiple fire elements as well as smoke (Figures 14.19a and b). As always, things go better in linear floating point.

Figures 14.19 a and b. The background plate was stock footage of a raging fire (a), but it wasn't raging quite enough. Layering extra raging inferno footage helped the opaque look of such intense fires to break through the overlaid extra layers of smoke (b). (Figure 14.19b courtesy ABC-TV.)

Provided that your camera is not moving too much, a 2D fire layer should read adequately well as being fully three-dimensional. If it's not looking believable in your scene, the problem is likely a lack of interactive light. As was stated above, fire tends to illuminate everything around it with a warm, flickering glow.

There are a few ways to add this. First of all, as you can see in Figure 14.20, your fire element may include a certain amount of glow that you can use. Raising Input Black when adjusting Levels tends to eliminate this glow, so that control is an effective way to dial the glow in and out.

Figure 14.20. Depending on the Levels settings applied to the source fire element (specifically Input White and Black on the RGB and Red channels), you can end up with a lot of extra glow or omit the glow entirely.

For a shot featuring a character or object that reflects firelight, there's no need to go crazy projecting fire onto the subject. In many cases, it is enough to create some flickering in the character's own luminance values, for example by wiggling the Input White value at a low frequency in Levels (Individual Controls).

Note, however, that this glow isn't anything particularly unique or special; you can re-create it either via a heavily blurred duplicate of the source fire or using a masked and heavily feathered orange solid, with perhaps a slight amount of wiggle added to the glow opacity to cause a bit of interactive flickering.

Into the Third Dimension (and Beyond!)

You can pull off the illusion of fully three-dimensional fire, especially if the camera is moving around in 3D space, directly in After Effects. I was frankly surprised at how well this worked in the shot featured in Figures 14.21a, b, and c.

Figures 14.21 a, b, and c. Before-and-after sequential stills of a flyover shot. Because of the angle of the aerial camera, the shot required 3D motion tracking, originally done using 2D3's Boujou. (Images courtesy ABC-TV.)

As shown, the background plate is an aerial flyby of a forest. Because of the change in altitude and perspective, this shot clearly required 3D tracking (touched upon at the end of Chapter 8, "Effective Motion Tracking"). The keys to making this shot look fully dimensional were to break up the source fire elements into discrete chunks and to stagger those in 3D space so that as the plane rose above them, their relationship and parallax changed (Figure 14.22).

Figure 14.22. A top view of the 3D motion-tracked camera from Figure 14.21b panning past one set of fires (of which the final composition had half a dozen). The pink layers contain fire elements, the gray layers smoke. 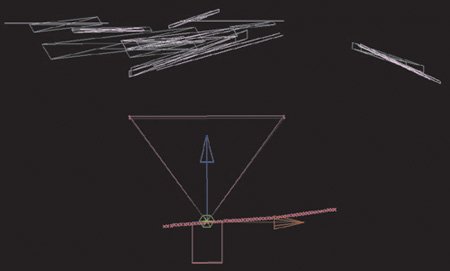 It is easy to get away with any individual fire element being 2D in this case. Because fire changes its shape constantly, there is nothing to give away its two-dimensionality. Borders of individual fire elements can freely overlap without being distracting, so it doesn't look cut out. The eye sees evidence of parallax between a couple dozen fire elements, and does not think to question that any individual one of them looks too flat. The smoke elements were handled in a similar way, organized along overlapping planes. As I mentioned in the previous chapter, smoke's translucency aids the illusion that overlapping smoke layers have dimensional depth.