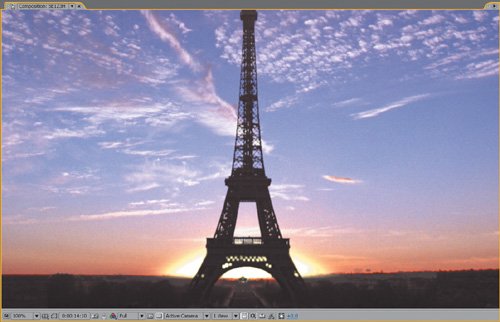 There are two kinds of light: the glow that illuminates and the glare that obscures.

Light is the most complex phenomenon a compositor must understand, and in much the same way a painter or cinematographer understands it. In other areas of digital production, elaborate models are derived to simulate the way light works in the physical world. Accurate modeling of the physics of light is crucial to realistic 3D renders, and the science of light phenomena, such as radiosity, caustics, the inverse square law, environment mapping, and many more, have transitioned from theoretical papers delivered at SIGGRAPH to features readily available in high-end 3D software.

The world of the compositor is less pure and scientific, which if anything makes an understanding of light phenomena in a scene that much more significant. Like a painter, you must observe the workings of light in the three-dimensional world so that you can re-create them in a two-dimensional frame, using your software toolbox. Like a cinematographer, you must have a feeling for how lighting and color decisions affect the beauty and drama of a scene.

Chapter 11 introduced the radical idea that there are alternative color models to the ones with which you're already familiar and that one of these in particular, linear floating point, represents the direction in which digital imaging is headed. Linear floating point is supported natively in After Effects 7.0; the basic workflow was described in that previous chapter, and hands-on examples follow toward the end of this chapter.

Several chapters in this book have already touched upon principles of the behavior of light. Chapter 5, "Color Correction," focused on the most fundamental work of the compositor: matching the brightness and color of a foreground layer to a background source. Chapter 11, "Film, HDR, and 32 Bit Compositing," explored the complex issue of working with light values that extend beyond the range that your monitor can display.

This chapter is dedicated to situations in which you as a compositor must create or emulate specific lighting conditions in your scene. You'll explore the actual behavior of light, its direction, intensity, color, position, reflection, diffusion, occlusion, and volume, and methods of re-creating these in realistic and dramatic ways, including such special situations as backlighting, flares, glints, blurs, and defocused lenses. I'll distinguish between lighting conditions you can easily emulate and those that are essentially out of boundsalthough, for a compositor with a good eye and patience, the seemingly "impossible" can be met as a welcome challenge.