Heat distortion, that strange rippling in the air that occurs when hot air is dissipated into cooler air, is another one of those effects compositors love. Like a lens flare, it's a highly visible effect that, if properly motivated and adjusted, lends realism to your scene rather than distracting from its story.

Figures 14.13a and b show the fabricated results of heat distortion in a scene. Its rippling effect adds to the dynamism or chaos of the scene. When your eye sees heat distortion, it understands that the environment is dynamic, containing an abrupt mix of hot air with cold air. This adds to the visceral reality of the shot, whether it's a desert exterior, a day at the racetrack, jet engine exhaust, or all three (which describes the pod race sequence from Star Wars pretty well). When the fire itself is in the shot and you can see through it or anywhere above it, you expect the fire to heavily distort whatever is visible behind its heat.

Figures 14.13a and b. The effect of heat haze has been added to the general mayhem being issued by the helicopter (a). A comparison with an unaltered shot of the building (b) emphasizes the amount of distortion. (Images courtesy The Orphanage.)

What Is Actually Happening

Stare into a swimming pool, and you can see displacement caused by the bending of light as it travels through the water. Rippled waves in the water cause rippled bending of light. There are cases in which our atmosphere behaves like this as well, when ripples are caused in it by the collision of warmer and cooler air, a medium which is not quite as transparent as it seems.

It can be useful to generate heat distortion particles in 3D animation software, when the distortion needs to be attached to a 3D animated object, such as a jet engine or rocket exhaust.

As you know from basic physics, hot air rises and hot particles move faster than cool ones. Air is not a perfectly clear medium but a translucent gas that can act as a lens. This "lens" is typically static and appears flat, but the application of heat causes an abrupt mixture of fast-moving hot air particles rising into cooler ambient air. This creates ripples that have the effect of displacing and distorting what is behind the moving air, just like ripples in the pool or ripples in the windows of an old house.

You might assume, therefore, that a physics model devised in 3D animation software would be more accurate than faking this effect in 2D. However, 3D software generally does not take into account the role of air in a shot. In any case, this effect behaves like an overlaid distortion on top of whatever lays beyond the hot air from the point of view of the camera. Therefore it's a perfectly appropriate compositing effect, useful when there is an object in the scene capable of generating a significant amount of hot air.

How to Re-create It

On the book's DVD, 14_heatDisplacement.aep contains the effect applied over a checkerboard background. You can easily see the results even in a still image (Figure 14.14). Setting up the particles is potentially the trickiest part, and of course the settings are unique for each scene.

Figure 14.14. A subtle effect, the heat displacement has been laid over a checkerboard where it is clearly visible traveling up the center of the image. 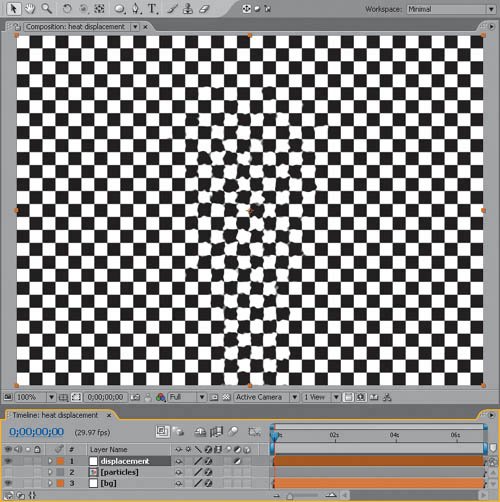 Particle Playground is perfectly adequate for this type of use, and it is included with After Effects Professional. Unfortunately, Particle Playground is generally slow to render and cumbersome, full of not-quite-intuitive properties. The help documents are thorough, but there are dozens of pages of documentation. Thankfully, this effect requires only a few simple adjustments:

Heat displacement often dissipates before it reaches the top of the frame. Making particles behave so that their lifespan ends before they reach the top of the frame is accurate, but painstaking. A simpler solution is to add a solid with a black-to-white gradient (created with the Ramp effect) as a luma matte to hold out the adjustment layer containing the displacement effect.

Now to put the animation to use: Drag it into the main comp, and turn off its visibility. The actual Displacement Map effect is applied either directly to the background plate or preferably to an adjustment layer sitting above all the layers that should be affected by the heat haze. Displacement Map is set by default to use the red channel for horizontal displacement and the green channel for vertical displacement; all you need to do is select the layer containing the red and green particles under the Displacement Map Layer pull-down.