Why Doesnt This Shot Look Real?

The ability to answer the Ultimate Question comes from developing two distinct skills:

If those things sound easy, then this book worked better than I thought it would! Please send your resume to The Orphanage immediately.

The first skill is perhaps the most elusive. It is something I observed sitting in dailies with the great visual effects supervisors of Industrial Light + Magic. Complex shots on their 40th take loop relentlessly on a 30-foot screen. The animator can't see anything but the keyframe tweak he finally nailed five minutes after submitting this take. The technical director stares relentlessly at his particle simulation, pondering coefficients of elasticity. The compositor is the last line of defense. She feels like she's done a pretty good job of putting the shot together, but knows that the motion track could use one more pass of fine-tuning.

Everyone in the room has what is known as Familiarity Disorder. This is the condition that prevents my health plan administrator from successfully explaining my coverage options: He understands the various plans so well that he cannot possibly put himself in my position, which is that I need it explained to me as if I was four years old and mildly retarded. He can never do that because he's too close to the details. In '80s action movie police-chief-speak, he's "in too deep." Everyone in dailies is in too deep. And that's why the chief needs to take each one's piece and badge and shout a spittle-drenched "You're off the case!"

But not Dennis Muren. His job is to remain objective, and this is a mighty challenge. But I would watch him do thissee the shot every time as if for the first timeand he would skip right past these nuances and details that the various contributors were sweating and say something like, "We should slip the sync of that explosion back a few frames. It will cut better with the next few shots that way."

Not that Dennis would ignore the details. But he would not focus on them when something bigger, something about the storytelling properties of the shot, was still not quite right.

How do you develop this skill? It is a matter of discipline. You need to be intimately familiar with the details of the shot in order to work it to perfection, but to keep it from getting overworked, you have to consciously remind yourself to stand back and at least try to see it objectively. So cure number one for Familiarity Disorder is

One of the reasons that working against Familiarity Disorder is so important is, and I really hate to break this to you, there will always be something more you could do to make a shot better. But, chances are, you have a deadline to meet, so you have to pick your battles. I mentioned that Dennis Muren would be selective about how he would nitpick details. What I came to realize was that he was using his ability to emulate the audience's experience to pick which details to sweat. A well-designed shot leads a viewer's eye to specific places. When a defect in some remote corner of the frame was pointed out to Dennis, he'd say, "If they're looking there, we've lost them." He makes shots for the people who are engrossed in the film, and he prioritizes storytelling over immaculateness.

The discipline of maintaining your freshness to the work you're doing will be something you struggle with on every shot. But remembering to struggle with it puts you way ahead of the game. Keep at it.

Analyzing What You See

The second skill that is required when struggling with the Ultimate Question is the reason that the chapter is called "Learning to See."

Have you ever taken a life drawing class? You should. The supplies are cheap, and you get to look at naked people. Don't make me spell this out for you.

In life drawing you'll learn that you have to fight off the part of your brain that knows what an arm is. You know an arm is a long, skinny thing. But the model has an arm draped over a knee, aiming right at you. You see the arm heavily foreshortened or compressed in perspective. In fact, from your specific point of view, the elbow is directly in front of the shoulder, and the wrist is almost blocking it.

Now, of course your life drawing is perfect, but look what that idiot in front of you did. He drew the arm as a long, skinny thing. He did that because he knows that's what an arm looks like. He drew what he knew, not what he saw. And his arm be lookin' fonky.

Knowing What You Know

We do this all the time in visual effects without even realizing it. When asked to add an element, such as a haze effect, a lens flare, or a dust hit, you think "I know what that looks like" and add it to the shot. And it looks stupid. Why? Because in truth, we don't really know what things look like.

Let me use some theatrics here and ask you to read that last sentence again:

Our brains are very complicated, sophisticated instruments that connect to our eyes in a slightly fancier way than an S-Video cable. When we visually absorb things, we don't see images, we recognize objects. We don't see colors and shapes, we see people and oncoming trains.

Don't believe me? Pop quiz: What color is the rearmost tomato in Figure 15.1?

Figure 15.1. What color is the rearmost tomato? 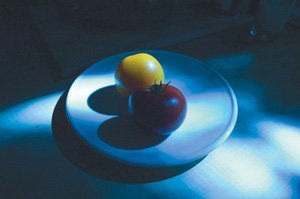 Did you say yellow? If so, you are correct. But check this out: Figure 15.2 is a crop of that image, showing just the tomato.

That patch of color is clearly green. How did you know it was yellow? Your brain looked past the color on the screen and saw that the whole image has a blue tint to it. Knowing this, and knowing a little about tomatoes, your brain filed that as a yellow object.

Your brain second-guesses your eyes like this all the time. College students quizzed on the height of a guest speaker guessed taller when they were told he was a visiting professor than when told he was a grad student. Eyewitnesses to crimes report widely differing descriptions of the criminal depending on their personal experiences and associations.

As compositors, it's our job to know that our brains are unreliable image banksthey store ideas, not pictures. So we can therefore correlate that if we create images based on what we know, we will be basing them on bad data. This is where that digital camera comes into play.