Sky replacement is among the cheapest and easiest extensions that can be made to a shot. This opens up various possibilities to shoot faster and more cheaply. Not only do you not have to wait for ideal climate conditions, you can also swap in not only a different sky but even an extended physical skyline.

Skies are, after all, part of the story, often a subliminal one but occasionally a starring element. In Vanilla Sky, for example, the surreal-looking sky was the first clue that maybe Tom Cruise's character was no longer inhabiting the real world. An interior with a window could be anywhere, but show a Manhattan or San Francisco skyline outside the window and locals will automatically gauge the exact neighborhood and city block of that location, along with the time of day, time of year, weather, outside temperature, and so on, possibly without ever really paying conscious attention to it.

There is sometimes no replacement for the real thing. If you want well shot dawn/dusk reference, or just love the look of magic hour, study Days of Heaven, which required a couple of years to shoot, often less than one golden hour per clear day at a time.

Why spend extra production money on background conditions for a scene that could be shot cheaper elsewhere? You could spend tens (even hundreds) of thousands of dollars for that view apartment on Central Park East for a scene at golden hour (the beautiful "hour" of sunset that typically lasts about 20 minutes and is missing on an overcast day). The guerilla method would be to use your friend's apartment, light it orange, shoot all day, and add the sunset view in post. In many cases, the real story is elsewhere, and the sky is a subliminal (even if beautiful) backdrop that must serve that story (Figures 13.8a through d).

Figures 13.8a through d. For an independent film with no budget set in San Francisco, the director had the clever idea of shooting it in a building lobby across the bay in lower-rent Oakland (a), pulling a matte from the blue sky (b), and match moving a still shot of the San Francisco skyline (from street level, c) for a result that anyone familiar with that infamous pyramid-shaped building would assume was taken in downtown San Francisco. (Images courtesy The Orphanage.) 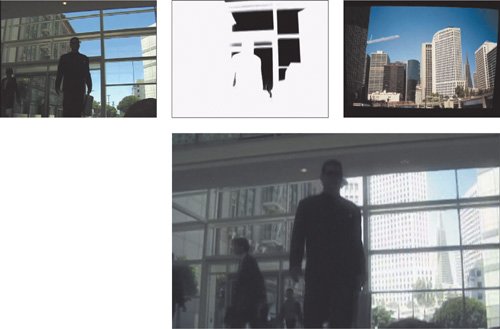 The Sky Is Not (Quite) a Blue Screen

Only on the clearest, bluest days does the sky become a candidate for blue-screen keying. Look at an actual sky (there may be one nearby as you read this) or even better, study reference images, and you may notice that the blue color desaturates near the horizon, cloudless skies are not always so easy to come by, and even clear blue skies are not as saturated as they might sometimes seem.

Still, some combination of a color keyer, such as Keylight, and a hi-con luminance matte pass or a garbage matte, as needed, can remove the existing sky in your shot, leaving nice edges around the foreground. Chapter 6, "Color Keying," focuses on strategies for employing these, and Chapter 7, "Rotoscoping and Paint," describes supporting strategies when keys and garbage mattes fail.

The first step of sky replacement is to remove the existing "sky" (which may include other items at infinite distance, such as buildings and clouds) by developing a matte for it. As you do this, place the replacement sky in the background; a sky matte typically does not have to be as exacting as a blue-screen key because the replacement sky often bears a resemblance to the source (Figure 13.9). The 13_skyReplace1.aep project on the book's disc contains a simple example.

Figure 13.9. This rather poor blue-screen matte is acceptable for this type of shot because the color range and contrast of the target background are not so different from the source. The holes in the matte are the result of reflected sky color in the highlights of the foreground; this looks acceptable in the final shot.

A locked-off shot can be completed with the creation of the matte and a color match to the new sky. If, however, there is camera movement in the shot, you might assume that a 3D track is needed to properly add a new sky element.

The basic phenomenon to re-create is that scenery at infinite distance moves less than objects in the foreground. This is the parallax effect, which is less pronounced with a long, telephoto lens, and much more obvious with a wide angle. For the match in Figure 13.8, a still shot (no perspective) was skewed to match the correct angle and tracked in 2D; the lens angle was long enough and the shot brief enough that they got away with it. A simpler example is included on the disc in 13_skyReplace2.aep.