Each explosion you will see is a little bit unique, but to narrow the discussion I'll organize all explosions into two basic categories. The easier one to deal with is the gaseous explosion, one made up only of gas and heat. These behave just like fire; in fact, in the shot in Figure 14.21b the explosion is fire, a huge ball of it where something very combustible must have gone up very quickly.

Some shots end up looking fake, however, because they use a gaseous explosion when a more chunky explosion is called for. A debris explosion is an explosion that also contains chunks of various types of exploding debris. The need for debris is one reason that exploding miniatures are still in use (or even, when possible, full-scale explosions).

The debris cues viewers to several important pieces of information about the shot. First of all, how big was the explosion? The slower moving and bigger the amount of debris, the bigger it probably was. For this reason, effects pyrotechnics tend to use miniatures shot with a high-speed camera. The resulting slow-motion effect makes the explosion seem much bigger than it was.

If your shot calls for a chunky explosion and you don't have any chunks in your source, you need to add them somehow. Many 3D programs these days include effective dynamics simulations; if you go that route, be sure to generate a depth map as well because each chunk will only be revealed as it emerges from the fireball. Many other concerns associated with this are beyond the scope of this discussion because they must be solved in other software.

One effect that seems to come close in After Effects is Shatter, but it's hard to recommend this unless it is specifically a pane of glass or other plane that breaks. Shatter isn't horrendous for a decade-old dynamics simulator, but its primary limitation is a huge one: It can only employ extruded flat polygons to model the chunks. A pane of glass is one of the few physical objects that would shatter into irregular but flat polygons, and Shatter contains built-in controls for specifying the size of the shards in the point of impact. Shatter was also developed prior to the introduction of 3D in After Effects; you can place your imaginary window in perspective space, but not using a camera or 3D controls.

A wide selection of pyrotechnic explosions is also available as stock footage from such companies as Artbeats. In many cases, there is no substitute for footage of a real, physical object being blown to bits (Figure 14.23).

Figure 14.23. Pyrotechnics footage is just the thing when you need a big explosion, filled with debris. (Images courtesy Artbeats.) 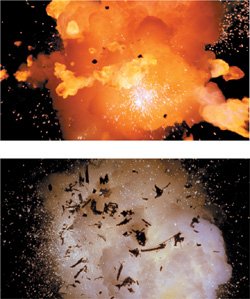