The Fog, Smoke, or Mist Rolls In

An animated layer of translucent clouds is easily enough re-created in After Effects. The basic element can be fabricated by applying the Fractal Noise effect to a solid, and then using a Blending mode such as Add or Screen to layer it in with the appropriate Opacity setting. 13_smokyFlyover.aep contains a simple example of layers of smoke laid out as if on a three-dimensional plane.

The eminently useful Fractal Noise effect, found in the Noise & Grain category, should not be confused with the far less useful (albeit pretty) Fractal effect in the Render category.

Fractal Noise at its default settings already looks smoky (Figure 13.10); switching Noise Type setting from the default, Soft Linear, to Spline, improves it. The main thing to add is motion.

Figure 13.10. Fractal Noise (shown at the default setting, with Noise Type set to Spline) is a decent stand-in for organic-looking fog. You can try varying the Fractal Type or Noise Type to get different looks, and you must animate the Evolution if you want any billowing of the element. Several Fractal Types are available, as seen in the pull-down menu. 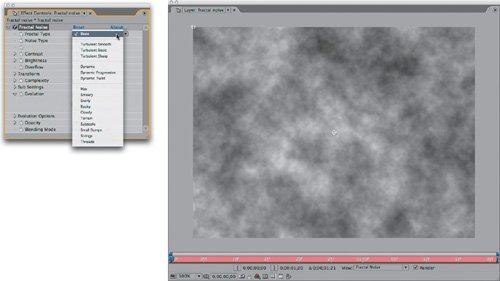 An Evolution animation creates internal movement, while Transform animations cause the overall layer to move as if being blown by wind. Offset Turbulence can be used to reposition infinitely without running out of space.

The look is greatly improved by layering at least two separate passes via a Blending mode (as in the example project).

Figure 13.11. The smoke in this shot is made up of one large rendered fractal noise element that is sliced up, staggered (as seen with the layer outlines), and animated in pseudo-3D. 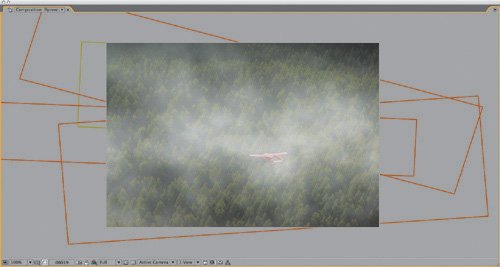 The unexpected byproduct of layering 2D particle layers in this manner is that they take on the illusion of depth and volume. The eye perceives changes in parallax between the foreground and background, and automatically assumes these to be a byproduct of full three-dimensionality, yet you save the time and trouble of a 3D volumetric particle render. Of course, you're limited to instances in which particles don't interact with movement from objects in the scene; otherwise, you instantly graduate to some very tricky 3D effects.

Particle layers can be combined with the background via Blending modes, or they can be applied as a Luma Matte to a colored solid (allowing you to specify the color of the particles without having a Blending mode change it).

To add smoke to a generalized area of the frame, a big elliptical mask with a high feather setting (in the triple digits even for video resolution) will do the trick; if the borders of the smoke area are apparent, increase the mask feather even further (Figure 13.12).

Figure 13.12. This mask of a single smoke element from the shot in Figure 13.10 has a 200-pixel feather, despite that the resolution of the shot is D1 video (720 x 486). The softness of the mask helps to sell the element as smoke and works well overlaid with other, similarly feathered masked elements. 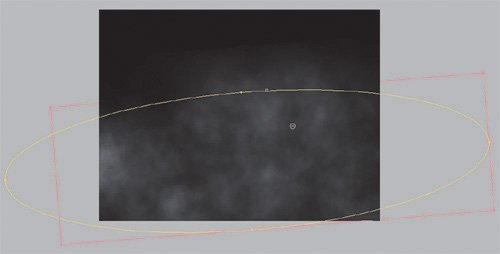 Moving Through the Mist

The same effect you get when you layer several instances of Fractal Noise can aid the illusion of moving forward through a misty cloud. That's done simply enough (for an example of flying through a synthetic cloud, see 13_smokyLayers.aep), but how often does your shot consist of just moving through a misty cloud? Most of the time, clouds of smoke or mist are added to an existing shot.

You can use the technique for emulating 3D tracking (see Chapter 10, "Expressions") to make the smoke hold its place in a particular area of the scene as the camera moves through (or above) it. To make this work, keep a few points in mind:

13_smokyFlyover.aep features just such an effect of moving forward through clouds. It combines the tracking of each shot carefully into place with the phenomenon of parallax, whereby overlapping layers swirl across one another in a believable manner. Mist and smoke seem to be a volume but they actually often behave more like overlapping, translucent planesindividual clouds of mist and smoke.

Close-Up: Selling the Effect with Diffraction

There is more to adding a cloud to a realistic shot than a simple A over B comp; water elements in the air, whether in spray, mist, or clouds, not only occlude light but diffract it. This diffraction effect can be simulated by applying Compound Blur to an adjustment layer between the fog and the background and using a precomposed (or prerendered) version of the fog element as its Blur layer.

You want details, and you'll get them, but you have to make it to the last chapter of the book, where guest author Stu Maschwitz lays it all out in detail.