Let's talk about morphingthat's right, that crazy craze of the early '90s. Where are you now, Michael Jackson?

Thing is, morphing can come in handy, without being so blatant and obvious, if you think of it as a concealing tool. It's useful when you don't want anyone to notice a transition between two objects or even a transition between one object and itself at a different point in time. Or heck, go crazy morphing together members of your extended family to see if you look anything like the result.

What exactly is a morph? It is, quite simply, a combination of two warps and a dissolve. Given two images, each with a corresponding shape (say, the features of the face), you warp the source image's face shape to the face shape of the target, warp the target from something that matches the source to its face shape, fading the target in over the source.

After Effects has no tool called "Morph," and for a long time, the program offered no good way to pull off this effect. After Effects Professional includes Reshape, a warping tool that lays the groundwork for simple morphs. You can build these up into more complex morphs, with separate individual transitions occurring to create an overall transition.

Unfortunately, creating a morph with Reshape is nowhere near a one-button process. This book generally steers away from step-by-step recipes in favor of helping you solve larger problems creatively, but in this case, it's easy to get confused. So here is a step-by-step, using a demonstration of my own resemblance transitioning to that of my evil twin (Figure 7.14):

Figure 7.14. Me and my evil twin, and that awkward adolescent phase in between.

Figures 7.15. The outline of each head is carefully masked. These two masks need not correspond to one another; they are defining the boundary for the Reshape effect and can have differing numbers and orders of points. This mask prevents Reshape from pulling bits of background into the morph region.

Figure 7.16. The full setup along with the top layer enabled at 100% and color corrected. It begins the final animation at 0% Opacity, reaching 100% at the end of the transition. 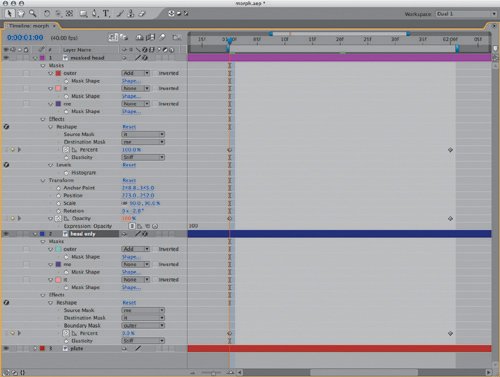 The Correspondence Points in Reshape can be raised from the default of 1 to make the distortion more precise (and in some cases, less twisted). The downside is that this slow effect thus becomes even slower. Better to simplify what you're attempting to do with your masks and fix things there; raise this value only as a last resort.

You should now be ready to preview. The preview may take a long time to build the first frame; subsequent frames render much more quickly, so be patient. The main question to resolve is whether the features line up properly; if not, you must adjust the source and destination mask shapes accordingly, watching the median frame to see whether the changes are improving matters.

At this point my example may be looking good in terms of the face transition (Figure 7.16), but, of course, I've made life hard on myself by transitioning from a head of one size to a larger one, and the edges just kind of fade in. Thereforeand this is where it can get really complicatedI add a second morph, using the same steps as before, but all new masks.

If at any point during setup it becomes difficult to interact with the UI because After Effects is taking so long updating a frame, enable Caps Lock on your keyboard to prevent any further frame rendering until you're done.

Why complicated? Why new masks? These two questions are interrelated. If you set a second Reshape effect, the key is to avoid influencing the result of the first Reshape effect at all. Therefore, on the second instance the Boundary mask should be the boundary of the object minus the area occupied by the original source and destination masks. My second set of shapes covers the ears and top of the head, but avoids the area of the previous masks completely (Figure 7.17). 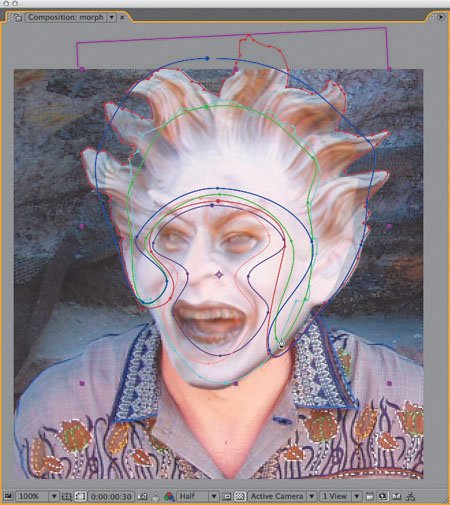 Because I know this is complicated, I've included the source project and the final result as projects on the book's DVD-ROM. Please do not use the result as the centerpiece of your horror feature.

Now, a quick look at a detail I left out (by having you duplicate the Source and Destination masks in step 9, for example, rather than draw them from scratch).

The Reshape tool relies on a concept that was touched upon already, but now looms more significant: that of the First Vertex that exists on every mask. Look closely at a mask, and you will notice one vertex that is larger than the rest; that's the First Vertex.

If either of these criteria is not fulfilled, Reshape will execute some not-so-nice compensatory measures, probably deforming the in-between frames in undesirable ways. The easiest solution is usually to duplicate the source mask and edit it, keeping the same number of points. The next easiest method would be to draw a new mask with the same number of points, in the same direction (clockwise or counterclockwise), and to set the First Vertex where you need it (by context-clicking on the mask and choosing Select First Vertex from the menu).