When you use these techniques to start seeing the world, and then begin implementing your profound insights in your comps, you will begin to see the importance of this last point: It is almost always better to create effects from the basic toolkit of After Effects than to resort to an off-the-shelf, canned effect.

"Default" is a dirty word. Remember that week-long effort to re-create a photoreal lens flare? It's worth noting that this effort was supported fully by the guy whose name is synonymous with digital lens artifacts. But even John Knoll knew that to appear unflinchingly huge on the big screen, his schwings were going to need some nuancing.

I hope you do have Knoll Light Factory (Red Giant Software; a demo is on the book's disc) because its documentation is an excellent treatise on the importance of good reference. John points out some of the vital design aspects of flares that he noticed when scrutinizing the real thing.

In Figure 15.15's real-life flare, the little septagonal reflections that slice through the center of the frame have seven sides because the camera's aperture has seven blades. The star-shaped core of the flare has 14 points (not counting the purplish CCD smear), each pair perpendicular to the edge of one of these blades. This is because the star is an artifact of light grazing off the edge of the aperture blades. This also means that if you were to defocus an element in this shot, you should use a five-sided camera blur shape for the proper boke effect for this lens. 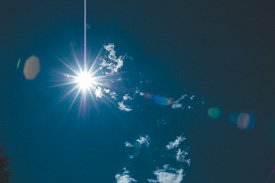 Now, if you start throwing out terms like "boke" in dailies, even Dennis Muren will be impressed.

Most effects we use in After Effects are built up of smaller, simple filtering operations that themselves exist as effects. There's nothing about the built-in Glow effect, for example, that you cannot easily create on your own. You could wrestle with Glow all day long and never match the reference you shot of an F-18 afterburner, but with your homebrew glow not only will you have finer control, but you will also have a better understanding of how glows work (Figure 15.16). 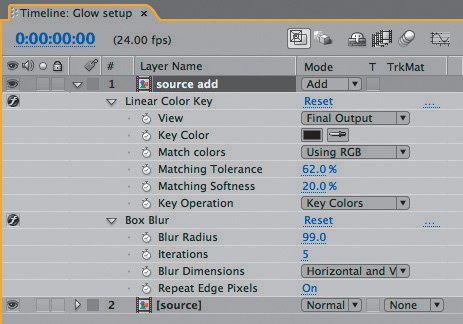 After Effects ships with hundreds of effects. Apple's Shake ships with far fewer nodes but is viewed as "high end." Although some would say that the decision to eschew canned effects is one you arrive at after becoming an expert, I propose that the opposite is true: Skipping the all-in-one plug-ins and developing your own looks from scratch will propel you toward expert status.