What is wind doing in this chapter? You can't see it. How do you composite it into your shot? Although it's invisible, the effects of wind on a shot are certainly integral to its realism. Besides the effect of wind on particles, what other roles does wind play?

As I write this chapter, it is a warm, still, sunny day, but in my backyard leaves and tree branches do sway gently from time to time. If I wanted to re-create the scene from a still or 3D render or if I wanted to add an element to it, the result just wouldn't look right without these subtle bits of motion.

The fact is that most still scenes in the real world contain ambient motion of some kind. Not only objects directly in the scene, but reflected light and shadow might be changing all the time in a scene we perceive to be motionless.

As a compositor, part of your job is to think about these kinds of ambient effects, and to look for opportunities to add to them in ways that contribute to the realism of the scene without stealing focus. Obviously, the kinds of dynamics involved with making the leaves and branches of a tree sway are mostly beyond the realm of 2D compositing, but there are often other elements that are easily articulated and animated ever so slightly. Successful examples of ambient animation should not be noticeable, and they often will not have been explicitly requested, so it's an exercise in subtlety.

To make it easier on yourself, look for elements that can be readily isolated and articulated; you should be able to mask the element out with a simple roto or a hi-con matte if it's not separated to begin with. Look for the point where the object would bend or pivot, place your anchor point there, then animate a gentle rotation. 13_ambientAnim.aep (on the disc) offers a simple animation of the arm of a streetlight, held out from the background. A little warp on the clouds behind it, and this still image could convincingly be a brief moving shot (Figure 13.20).

Figure 13.20. The arm of the streetlight is masked, its anchor point moved to the base, and a simple wiggle to the Rotation gives it ambient motion as would be caused by wind. 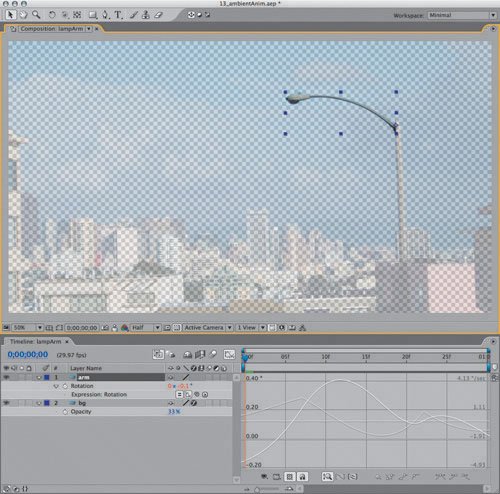 You also have the option of acquiring and adding elements that indicate or add to the effect of wind motion. Figure 13.21 shows an element of blowing autumn leaves shot against a black background for easy removal and matting; granted, you could add an element this turbulent only to a scene that either already had signs of gusts in it or that contained only elements that would show no secondary motion from wind whatsoever.

Another idea is to add the indirect effects of ambient motion generated by wind; moving shadows and the play of light also enliven a static scene, and capturing or synthesizing these elements to interact with objects in the scene will more readily appear realistic than re-creating them directly.

So, for example, adding the swaying branches of a tree to your scene is complicated, but creating a hi-con matte of existing footage of a tree and turning it into a shadow cast on the ground plane might not be as bad, if the ground plane is flat (Figure 13.22). The same goes for fire, which might flicker and reflect off the faces of characters in the scene, or water, whose rippling reflections can be more easily synthesized than the look of water itself. The simpler the plane receiving the reflection, the more likely you might get away with this.

Figure 13.22. Animating your own trees swaying in the breeze just to make a shadow would be a big pain. Why not steal their silhouettes and get the motion for free? The process is detailed in Chapter 12, "Working with Light." 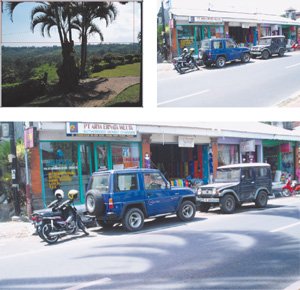