You've already examined the effect of water in its gaseous form (as fog, mist, or steam); what about water in its liquid and solid states? Although it's not possible to re-create The Perfect Storm or The Day After Tomorrow without elaborate 3D and practical effects, compositing plays a pivotal role in re-creating rain and snow and in enhancing practical and computer-generated scenes.

Realistically, though, it's rare to create elaborate water effects without relying on some even more elaborate practical or computer-generated source. I'll assume that you're trying to complete shots only in After Effects, but I'll focus on techniques that are equally valid even if your particle and water animations are created elsewhere.

One area where After Effects' built-in features fall short is particle generation. The Particle Playground effect, which ships with the program and hasn't changed much since around version 3.0, is slow, crude, and cumbersome. I have yet to work with anyone who had the patience to coax realistic effects out of this plug-in.

It's nothing against dedicated 3D programs or the artists who use them to recognize that a faster and better-integrated result can often be achieved in After Effects because its workflow and impact on a shot as a whole are more direct. These types of effects contain lots of variables, and often require many iterationsfewer if performed in the context of the whole shot.

If you're called upon to create rainfall or snowfall from scratch, consider the Particular plug-in from Trapcode (a demo is included on the book's disc). Not only does it outdo Particle Playground in features and ease of use, but also, if set up correctly, it obviates the need for creating precipitation in a dedicated 3D program.

Particular contains all the controls needed to create a great precipitation element, but it also contains a lot of controls, period. Here is a brief attempt to outline a few of the most significant ones, followed by an example of how to use a final element.

A waterfall remains a challenging element to re-create in software, so here's an old school practical way to shoot this element as a miniature instead: Use sand.

You can adjust and color correct sand coming out of a funnel or trough to look a lot like a waterfall. Depending on how heavy the sand is, you might even get some of the spray at the base (as a cloud of dust). The tricky part is setting up the shoot properly; everything that is not sand must be negative space, so you'll need a miniature stage (which can be all cardboard) in a solid color (Rosco blue, say, or flat black), lighting, and a matched camera perspective. Cue the sand, and roll the camera.

A standard particle shape can be used, or customized particles, such as an irregular snowflake shape. There are several choices of particle emitters, but one great option is to use a spotlight, making the light layer's Transform controls available to establish the position and direction of the particles in 3D space (Figure 13.23).

Figure 13.23. The axes belong to a light used as an emitter for Particular. It can be freely translated in 3D space. 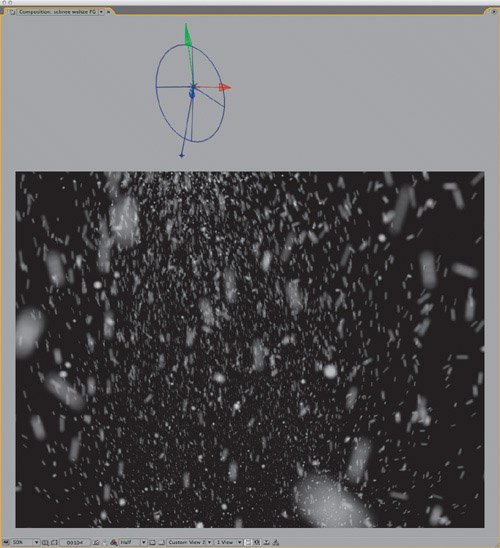 The most important settings are found in the Emitter and Physics categories. Emitter settings establish the amount, velocity, and direction of particles, while Physics contains controls pertaining to the environment itself: gravity, air resistance, wind, turbulence, and spin.

The Visibility category contains controls affecting the depth of your particles. You may find that, as with smoke earlier in the chapter, several planes will offer a better result than one big simulation, allowing you to control, say, the foreground separate from everything else.

Particular resides on a 2D layer, but the effect is 3D-aware, so if you add a camera to the composition, the particles will behave as if seen through that camera.

When it comes time to integrate falling rain or snow with a background plate, you can do better than a simple A over B comp; in fact, the key is to show the effect of these elements on the scene rather than showing the elements themselves.

The presence of water (outside of the shot area) is implied by the presence of its reflected light in the scene. Light from water has a compelling shape and movement, and if you've set up the scene so that the viewer knows there's a swimming pool or a lake nearby, it may even be expected.

The question is how to get the sample of the play of light, reflected off of the waves. With patient adjustments, you can use Wave World, an effect included when you register your copy of After Effects. The default settings won't do. For one thing, View must be changed to Height Map just to preview the effect, and Grid Resolution must be raised (it's set for a feeble 1990s-era computer) along with optional Pre-roll settings. Reflect Edges can be set to All. Then the trick is to set Position and Amplitude for a natural look. The compositing technique is similar to what is done with shadows (Chapter 12): Position the plane and choose a blending mode, such as Add or Vivid Light, or apply it as a Luma Matte to an adjustment layer containing Levels.

Raindrops and snowflakes are translucent, their appearance heavily influenced by the environment. More than that, these individual bits of precipitation behave like tiny lenses that diffract light, defocusing and lowering the contrast of whatever is behind them, but also picking up the ambient light themselves. Therefore, on The Day After Tomorrow our crew found success with using the rain or snow element as a track matte for an adjustment layer containing a Fast Blur and a Levels effect.

To allow you to sample the results of a Particular render, included on the DVD are a foreground and background snow animation, which have been applied as follows in 13_snowfall.aep.

Blurriness is set very high (200), so that the area behind each individual raindrop or snowflake becomes a wash of color. Levels is applied with a slightly lowered (90%) Output White value, and a very high (80%) Output Black value. The precipitation is visible by its effect on the scene, lightening dark areas, darkening light ones, and adding diffusion throughout (Figure 13.24).

Figure 13.24. You must look closely to see the added snowfall in a still image with so many bright regions; to see it applied in motion via adjustment layers, open 13_snowfall.aep. (Source image courtesy Eric E. Yang via Creative Commons). 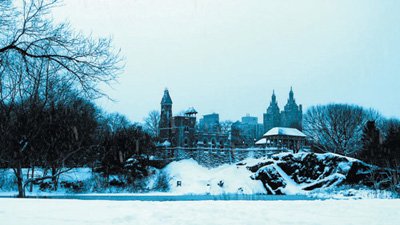 The best thing about this approach is that it works independently of the background appearance. There is no need to decide the color of the element for a given shot, and shots retain source colors, the precipitation having a similar influence on each shot in a sequence.