Before two computers or network devices can exchange information, they must establish communication, and this is where protocols come in. A network protocol enables two devices to communicate by using one set of rules. The OSI model and protocol standards help to ensure that networking devices are capable of working together over a network.

Protocols are the hardware or software components that carry out the OSI model guidelines for transferring information on a network. A protocol may be one component or a collection of components that carry out a task. A protocol stack, or protocol suite, is made up of multiple protocols used to exchange information between computers. One protocol in the stack might specify how network interface cards (NICs) communicate, and another might specify how a computer reads information from the NIC.

In the early 1970s, a problem was brewing. There were many different computer manufacturers, and there were many incompatibilities among them. Furthermore, each manufacturer created different product lines, and even within one company, there were often incompatibilities between product lines. So the International Organization for Standardization (ISO; www.iso.org) got involved and created the Open Systems Interconnection (OSI) reference model, which is a blueprint for device manufacturers and software developers to use when creating products.

The OSI model, shown in Figure 5.8, has seven layers that describe the tasks that must be performed to transfer information on a network. When data is being transferred over a network, it must pass through each layer of the OSI model. As the data passes through each layer, information is added to that data. At the destination, the additional information is removed. Layers 4 through 7 occur at the end node, and Layers 1 through 3 are the most important to telecommunications networks. 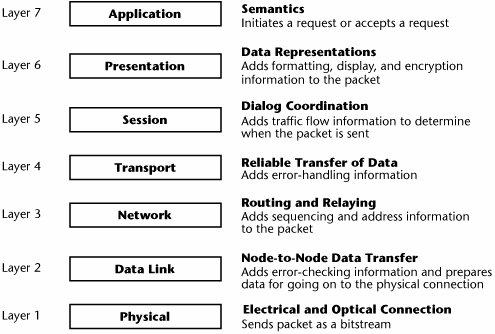 It is important to understand that the OSI model is exactly thata model. It is a conceptual framework useful for describing the necessary functions required of a network device or member. No actual networking product implements the model precisely as described.

Layer 6, the presentation layer, formats information so that a software application can read it. It performs transformations on the data to provide a standardized application interface and common communication services. It offers services such as encryption, compression, and reformatting. The presentation layer adds a field in each packet that tells how the information within the packet is encoded. It indicates whether any compression has been performed and, if so, indicates what type of compression so that the receiver can decompress it properly. It also indicates whether there has been any encryption, and if there has, it indicates what type so that the receiver can properly decrypt it. The presentation layer ensures that the transmitter and receiver see the information in the same format. Typically, Layer 6 processing is handled by an application rather than by a separate process running on a computer. In some cases, Layer 6 processing is handled by a process running at Layer 5.

Layer 5, the session layer, supports connections between sessions and handles administrative tasks and security. It establishes and monitors connections between computers, and it provides the control structure for communication between applications. Examples of session layer protocols include Network Basic Input/Output System (NetBIOS) and Lightweight Directory Access Protocol (LDAP).

Layer 3, the network layer, identifies computers on a network and determines how to direct information transfer over that network. In other words, it is a routing and relaying layer. It defines how to move information between networks, providing the functional and procedural means of transferring variable-length data sequences from a source to a destination via one or more networks while maintaining the QoS requested by the transport layer. The key responsibility of this layer is to perform network routing, flow control, segmentation/desegmentation, and error control functions. Examples of network layer protocols are X.25, Internet Protocol (IP), Internetwork Packet Exchange (IPX), and Message Transfer Part (MTP; part of the PSTN).

Layer 1, the physical layer, defines how a transmission medium connects to a computer as well as how electrical or optical information is transferred on the transmission medium. The physical layer defines the types of cables or wireless interfaces that are allowed, the voltage levels used to represent the bits or the optical levels, the types of connectors that are allowed, and the types of transmission rates that can be supported. Every network service and every network device has definitions at the physical layer in terms of what it can physically interface with. For example, the physical layer deals with unshielded twisted-pair (UTP) and shielded twisted-pair (STP), coax, 10BASE-T (an Ethernet standard that allows the use of twisted-pair to support 10Mbps to the desktop, largely for legacy systems), 100BASE-T (the standard enterprises currently favor), multimode fiber and single-mode fiber, xDSL, ISDN, and the various capacities in PDH (e.g., DS-1/DS-3, E-1/E-3) and SDH/SONET (e.g., OC-1 through OC-192) networks.

TCP/IP, which is an entire set of internetworking protocols, is described by its own layered modelsomewhat like the OSI model but also unique. Whereas OSI defines seven layers, the TCP/IP model is a four-layer network architecture (see Figure 5.9).

TCP/IP Layer 1, the network access protocols, relates to OSI Layers 1 and 2. It defines the range of networks that can be interconnected with IP and through which an IP datagram can be forwarded on the way to its destination. The many options include the following:

TCP/IP Layer 2 deals with internetworking protocols and is analogous to OSI Layer 3. This layer is the key to the architecture: It realizes the interconnection of remote (heterogeneous) networks without establishing an end-to-end connection. Its role is to inject packets into any network and deliver them to the destination independent of one another. Because no connection is established first, packets may not be received in order; the delivery order control process is the responsibility of the upper layers. Because of the major role of this layer in the packet delivery process, the critical point of this layer is routing. That is why this layer compares to the network layer of the OSI model. IP is the official implementation of this layer, and all transmissions are sent in IP messages, referred to as datagrams. The datagrams are forwarded to their destinations by routers. IP defines an unreliable, best-effort packet-forwarding service. It does not provide error checking, sequencing, or guaranteed delivery.

TCP/IP Layer 3 handles the host-to-host protocols and has the same role as the transport layer of the OSI model (Layer 4). It is used to enable peer entities to talk with one another. These are terminal-to-terminal protocols that run in the end devices, such as the user's PC and the server. There are four possible implementations: TCP, UDP, and two newer transport protocols, Stream Control Transmission Protocol (SCTP) and Datagram Congestion Control Protocol (DCCP) (which are discussed in Chapter 8, "The Internet and IP Infrastructures"). TCP is a connection-oriented protocol that provides reliable, error-free delivery; mind you, sometimes conditions in the network can cause it to fail, and the network connection can be lost. Its role is to split up the message to be transmitted into a form the IP layer can handle. On the receiving side, TCP places packets in order to reconstruct the initial message. TCP is also in charge of the flow control of the connection. In comparison, UDP is a very simple protocol; it is connectionless and not guaranteed to be reliable, although in practice it works quite well. UDP assumes that there is no need for control of flow of the packets; instead, it relies on some other mechanism to assure quality control. It is used, for example, in support of Voice over IP (VoIP), where the delay associated with retransmissions is not tolerable and instead the end user must ask a person to repeat himself or herself when there is a problem with the delivery of the voice packets.

TCP/IP Layer 4 is the realm of applications protocols and relates to OSI Layers 5, 6, and 7. These are utilities that allow applications to access particular network services:

The TCP Stack Versus the OSI Model

Figure 5.10 shows the TCP stack and how it relates to the OSI model. 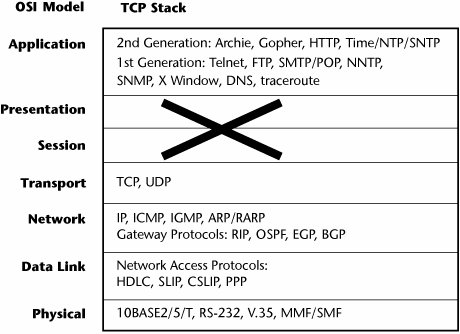