Trains, planes, and automobiles were once simply ways to transport people between locations, but they now offer yet another opportunity to stay connected to the Internet. While this was not easily accomplished in the past, today we have Mobile IP, an open standard defined by the IETF in RFC 3344. With the advent of packet-based mobile data applications and the increase of wireless computing, there is a corresponding need for seamless communication between mobile node devices and packet data networks, such as the Internet.

Mobile IP allows a user with a mobile device whose IP address is associated with one network to stay connected when moving to a network that has a different IP address. In other words, a user can keep the same IP address, stay connected, and maintain ongoing applications while roaming between IP networks. When a user leaves the network with which his or her device is associated (i.e., the home network) and enters the domain of a foreign network, the foreign network uses the Mobile IP protocol to inform the home network of a care-of address to which all packets for the user's device should be sent. The way it works can be illustrated through a post office analogy. Let's say I move from San Francisco to Hong Kong. When I get to Hong Kong, I drop off a note at the Hong Kong post office with my new Hong Kong address. The Hong Kong post office then notifies the San Francisco office of my new address. When the San Francisco post office receives mail for me, it knows to forward it to my Hong Kong address. Mobile IP is highly desirable in wireless WAN environments where users need to carry their mobile devices across multiple LANs that have different IP addresses.

Mobile IP is the underlying technology for support of various mobile data and wireless networking applications. Mobile IP technology is embedded in the functionality of packet equipment for 2.5G and 3G networks. For example, General Packet Radio Service (GPRS) depends on Mobile IP to enable the relay of messages to a GPRS phone via the serving GPRS support node (SGSN) from the gateway GPRS support node (GGSN) without the sender needing to know the serving node IP address. (GPRS is discussed in Chapter 14.) In addition, Mobile IP enables advanced applications such as unified messaging.

As shown in Figure 16.1, there are several key elements to Mobile IP: 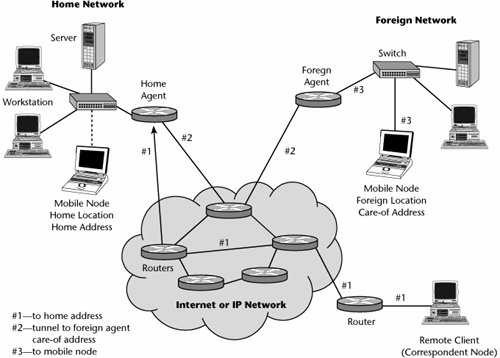 To accomplish seamless communication between a mobile node device and a packet network, such as the Internet, Mobile IP establishes the visited network as a foreign node and the home network as the home node. Mobile IP uses a tunneling protocol to allow messages from the packet network to be directed to the mobile node's IP address. This is accomplished by way of routing messages to the foreign node for delivery via tunneling the original IP address inside a packet destined for the temporary IP address assigned to the mobile node by the foreign node. The home agent and foreign agent continuously advertise their services on the network through an agent discovery process, enabling the home agent to recognize when a new foreign agent is acquired and allowing the mobile node to register a new care-of address. This method allows for seamless communications between the mobile node and applications residing on the packet network, providing seamless, always-on connectivity for mobile data applications and wireless computing.

The many applications for Mobile IP include support of VoIP, streaming video and audio, VPN clients (who can stay connected to the office without having to reauthenticate themselves when they switch networks), access to all database applications using remote connections (e.g., in customer relationship management and similar applications), any kind of peer-to-peer applications on the Internet, chat sessions, true mobility in hardware devices, and new cross-network services for operators and wireless service providers.

Enhancements to the Mobile IP technique are being developed to improve mobile communications in certain circumstances by making the processes more secure and more efficient. These enhancements include Mobile IPv6 and Hierarchical Mobile IPv6 (HMIPv6).