In the early 1980s, when most businesses were still using networked mainframes, two changes took place in computing infrastructures. First, there was a general growth in the number of devices in organizations, which created traffic growth. Second, skilled, technically oriented users began sneaking their own workstations in to work, and they would ask the company's MIS department to provide networking to the host computer; this created additional challenges for enterprise networking.

The increased traffic made companies step back to figure out how all the information that was creating all the traffic was being used. They found that about 80% of the information used by people within a given business address also came from within that address. Only 20% was being exchanged with a location outside the enterprise's physical perimeter. This was a clue that a networking option was needed to focus on a rather limited geographical spana building or a campus at mostand the solution that emerged became known as the LAN.

One key concept associated with the traditional LAN is that it acts as a common data highway that allows the linking of internal information resources. This common highway provides a great economic advantage because it allows resourcesboth software and hardwareto be shared.

Another key concept associated with local area networking is that the LAN is responsible for connecting the senders and the receivers, and it discriminates between all the nodes on the network. Traditionally, LANs relied on a shared medium (see Figure 6.1). Everyone was basically connected to the same cable (until about 1987, the medium was generally coax cable, and then other media were built into the recommendations, as well). Due to the increasing demand for bandwidth to the desktop to support multimedia applications, we have moved away from these shared-media environments to configurations that use hubs or switches. Those devices enable each workstation to have its own dedicated connection, increasing the bandwidth available to the workstation.

Figure 6.1. An example of a shared-medium LAN 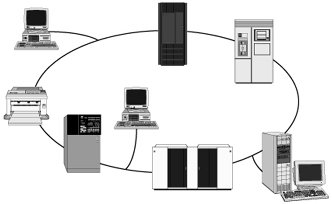 Finally, LANs can be deployed to serve either peer-to-peer arrangements, where essentially every node is equal (i.e., capable of processing and storing in its own right), or server-based networks, in which one computer is the repository (i.e., the server) and provides services on request and the other computers (i.e., the clients) request services from the server.

There are a number of benefits associated with creating these internal LAN infrastructures. First, they allow very timely access to data. Knowledge is a competitive edge, and the faster you have access to the newest and latest information, the better off you will be in servicing customers and developing products. Second, LANs allow standardization of applications. Over time, departments acquire different computing platforms, depending on the cycles between centralized and decentralized management. Instead of having to go through the labor hours and cost of porting applications to reside in different platforms, you can use LANs to enable sharing of an application over the common data highway, resulting in savings and convenience. Third, because of the resource sharing, these internal LAN infrastructures provide great cost reductions. One of the simplest yet greatest benefits of having a LAN is the ability to share devices, such as printers and scanners. Finally, they promote speedy and functional communication within an organization.

Typically, a LAN is made up of several key elements: