Two prerequisites must be satisfied to have successful communication. The first prerequisite is understandability. The transmitter and receiver must speak the same language. It doesn't matter how big or how clean the pipe between the two endpoints. If they're not speaking the same language, they will not be able to understand the message. In the case of data communications, we've resolved these issues quite elegantly: We have software and hardware translation devices that can convert between the different languages that individual computing systems speak. In the realm of human communications, we're about to embark on that exciting journey as well. Through the use of advanced voice-processing systems, in the next five to seven years we should have the ability to do real-time foreign language translation as part of the network service. And of course, some search engines, such as Google, already provide Web page translationand do a pretty good job at it.

The second prerequisite is the capability to detect errors as they occur and to have some procedure for resolving those errors. In the case of human communications, intelligent terminals at either endhuman beingscan detect noise that may have affected a transmission and request a retransmission, thereby correcting for that error. In the case of data devices, similar logic must be built in to end devices so that they can detect errors and request a retransmission in order to correct for the errors.

If these two prerequisitesunderstandability and error controlare met, then communication can occur. We communicate by using data devices over what is generically termed a transmission line. There are five main types of transmission linescircuits, channels, lines, trunks, and virtual circuitseach of which has a specific meaning. (Keep in mind that these transmission lines can be composed of either wired or wireless media, and in fact, these days, we're seeing more and more use of wireless facilities to accomplish networking, from simple mobile phones to the Interplanetary Internet.) The following sections describe each of these types of transmission lines in detail.

A circuit is the physical path that runs between two or more points. It terminates on a port (i.e., a point of electrical or optical interface), and that port can be in a host computer, on a multiplexer, on a switch, or in another device, as discussed later in this chapter.

In and of itself, a circuit does not define the number of simultaneous conversations that can be carried; that is a function of the type of circuit it is. For example, a simple, traditional telephone circuit is designed to carry just one conversation over one physical pathway. (But note that I specifically reference "traditional telephone circuit"; digital broadband facilities, such as DSL, permit multiple channels, such as separate voice and data channels, over the one physical pathway.) However, converting to a digital circuit makes it possible to extract or derive multiple channels over that circuit, subsequently facilitating multiple simultaneous conversations. The circuit is therefore the measure of the connectivity between two endpoints.

A four-wire circuit has two pairs of conductors. That is, it has two sets of one-way transmission paths: one path for each direction and a complementary path to complete the electrical circuit (see Figure 1.2). Four-wire circuits are used where the distance between the termination points requires that the signal be strengthened (amplified) periodically. So, for example, four-wire circuits connect the various switches that make up the public switched telephone network (PSTN). Four-wire circuits are also used with leased lines, where a customer may be connecting locations of its own that are separated by distance. Also, all digital circuits are provisioned on a four-wire basis.

When you release energy into space, it loses power as it travels. Because networks were designed to carry communications over a distance, they need tools to regenerate attenuated signalsthat is, signals that lose power as they travel across the network. These tools are called amplifiers and repeaters. An amplifier boosts an attenuated signal back up to its original power level so it can continue to make its way across the network. The PSTN traditionally used copper wires. Based on how quickly the signals attenuate over the copper wires, there's a certain distance limitation between amplifiers. The distance limitation between amplifiers is relatively short on copper wiresgenerally about 6,000 feet (1,800 m). As networks were built, these distance considerations were kept in mind. (Repeaters are discussed later in this chapter, in the section "Digital Transmission.")

Network builders had to give some thought to another aspect of amplifiers: First-generation amplifiers were unidirectional. They could only amplify a signal moving in one direction, so to provision a circuit that was going to be crossing a distance, it was necessary to literally provision two circuitsone to amplify the information in the transmit direction and a second to amplify the information in the receive direction. Therefore, whenever a network was crossing a distance, it needed to use a four-wire circuit. But in building the millions of local loops for subscribers, it was seen as being cost-effective to pull only two wires into every home rather than four. Therefore, the local loops were intentionally engineered to be very short; some 70% to 80% of the local loops worldwide are less than 2 miles (3.2 km) long. Because the local loops are short, they don't need amplifiers, and therefore the subscriber access service can be provisioned over a two-wire circuit. However, the local loop is increasingly being digitalized, so as we migrate to an end-to-end digital environment, everything becomes four-wire. Figure 1.3 shows an example of a segment of a network in which two- and four-wire circuits are traditionally used.

A channel defines a logical conversation path. It is the frequency band, time slot, or wavelength (also referred to as lambda, λ) allocated to a single conversation. In the context of telecommunications, a channel is a child of the digital age because digital facilities enable multiple channels, greatly increasing the carrying capacity of an individual circuit. Because we are becoming more digitalized all the time, people often refer to the number of channels rather than the number of circuits. 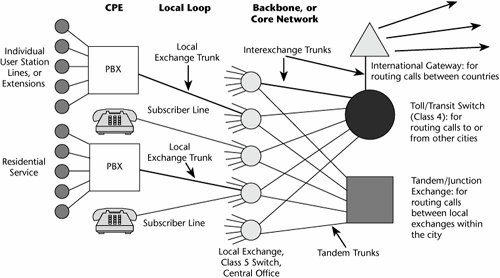 The customer environment attaches to the PSTN, and the first point of access is the local exchange, which is also referred to as a Class 5 office or a central office. The traditional (electromechanical and crossbar) local exchange switch can handle one or more exchanges, with each exchange capable of handling up to 10,000 subscriber lines, numbered 0000 to 9999. Electronic switches, available since 1980, can handle up to 50,000 subscribers. The only kind of call that a local exchange can complete on its own, without touching any of the other switches in the network, is to another number in that same local exchange. (Local exchanges are discussed in detail in Chapter 4, "The PSTN.")

PSTN local exchanges are interconnected into a hierarchy. For a local exchange to call a neighbor who resides 10 miles (16 km) away and who draws a dial tone from a different local exchange, the connection between those two different exchanges is accomplished through the second part of the hierarchya tandem switch (also called a junction exchange). The tandem switch is used to connect local exchanges throughout the metropolitan area. When it's time to make a long-distance toll call, another switching center is called into actionthe toll center (also called the Class 4 office, transit switch, or trunk exchange). The toll center is responsible for establishing and completing national long-distance communications.

The top of the hierarchy is the international gateway, whose exchanges are specifically designed to connect calls between different countries.

A trunk supplies the connections between the numerous switches within the PSTN, between customer-owned switches such as the PBX, and between the PBXs and the PSTN. On the other hand, a line supports a single user in the form of a subscriber line in the PSTN or an extension provisioned from the PBX. (Chapter 4 describes in detail the entities involved in managing local, tandem, and toll exchanges.)

Today, because of the great interest in and increased use of packet switching, most networks use virtual circuits. Unlike a physical circuit, which terminates on specific physical ports, a virtual circuit is a series of logical connections between sending and receiving devices (see Figure 1.5). A virtual circuit is a connection between two devices that acts as though it's a direct connection, but it may, in fact, be composed of a variety of different routes. The routes might change at any time, and the incoming return route doesn't have to mirror the outgoing route. These connections are defined by table entries inside the packet-switching device. A connection is established after the two devices agree on (1) communications parameters that are important to establishing and maintaining the connection and (2) how to provide the proper performance for the application they are supporting. The types of communication parameters that could be included are message size, the path to be taken, how to deal with acknowledgments in the event of errors, flow control procedures, error control procedures, and policies or agreements negotiated between carriers. The term virtual circuit is largely used to describe connections between two hosts in a packet-switching network, where the two hosts can communicate as though they have a dedicated connection, although the packets may be taking very different routes to arrive at their destination. 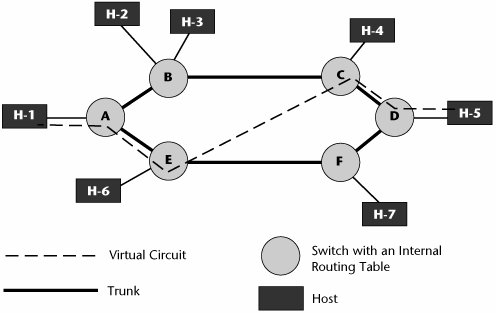 A PVC is a virtual circuit that is permanently available; that is, the connection always exists between the two locations or two devices in question. A PVC is manually configured by a network management system, and it remains in place until the user reconfigures the network. Its use is analogous to the use of a dedicated private line because it provides an always-on condition between two locations or two devices.

In contrast to PVCs, SVCs are set up on demand. They are provisioned dynamically by using signaling techniques. An SVC must be reestablished each time data is to be sent; after the data has been sent, the SVC disappears. An SVC is therefore analogous to a dialup connection in the PSTN. The main benefit of an SVC is that you can use it to access the network from anyplace. The predominant application for SVCs is to accommodate people who are working at home, in a hotel, at an airport, or otherwise outside the physical location of the enterprise network.