Use the "Start Qshell" CL command (STRQSH or QSH) to enter the Qshell environment. STRQSH has one parameter, CMD. The default value for CMD is *NONE, which means that no Qshell command is to be executed.

What happens when you run STRQSH depends on three things:

The rest of this chapter examines these variations on STRQSH.

Qshell in an Interactive Job 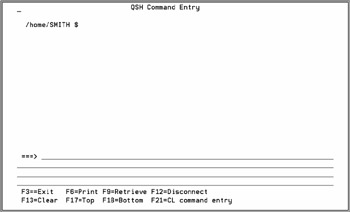 Figure 2.1: Both Java and Qshell use the same interactive terminal support.

Below the panel title is the output area. When a Qshell session begins, the output area is blank except for the Qshell primary prompt string, which in Figure 2.1 is the value /home/SMITH $ .

In the output area, Qshell lists the commands you give it and the response to those commands. Figure 2.2 shows part of the output area of an interactive Qshell session. First, the ls command tells Qshell to display a list of files whose names end with a period and the characters csv . Qshell responds with a list of three file names and the Qshell prompt, which in this session is set to the current directory followed by a dollar sign. The prompt informs the user that Qshell has completed the request and is ready for work.

The next command in Figure 2.2 is the rm , which removes directory entries. In this example, it deletes all CSV (comma-separated value) files.

The second ls command in Figure 2.2 lists files that end with .txt . Qshell responds with the appropriate list of file names and another Qshell prompt.

Below the command line is the function-key legend. Table 2.2 describes the function keys that are active in the shell.

You may specify a Qshell command up to 5,000 characters long in the CMD parameter of the STRQSH command. Here is an example:

In this case, Qshell does not open a terminal session. Instead, it executes the ls command and ends.

If the command specified in the CMD parameter produces output, Qshell opens a temporary C runtime terminal session, as shown in Figure 2.3. You can also direct the output elsewhere, as discussed later in this chapter. 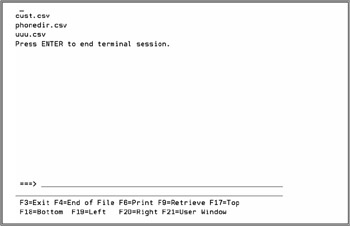 Input, however, is a different story. If you are running a script in this manner and Qshell encounters a request for terminal input, it ignores the request.

You may also run Qshell in a batch job, within certain limits:

The following example shows how to submit a Qshell command to run in batch mode:

If the CMD parameter contains the value *NONE, Qshell does nothing and the job ends normally.

As of V5R2, you may use the QIBM_QSH_CMD_OUTPUT environment variable to control the destination of Qshell output. The allowable values are listed in Table 2.3.

In the following example of the QIBM_QSH_CMD_OUTPUT environment variable, the names of comma-delimited files are written to the file lsout.txt in the current directory, replacing any previous contents:

As another example, the names of files that begin with a lowercase b are appended to the end of stream file lsout.txt, which is in the current directory:

In both of these examples, output is sent to IFS files in the current directory. Writing to a stream file is generally the sensible approach. However, that is not to say that Qshell won't write to a database file. Here, the names of comma-delimited files are written to program-described database file, lsout, in the FILEINFO library:

The output data is written to FILEINFO/lsout, ignoring record length. Each line of output is terminated by a hexadecimal-25 character. 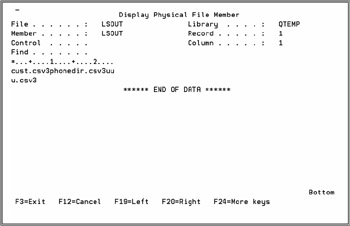 Figure 2.4: Qshell ignores the record length of a database file. 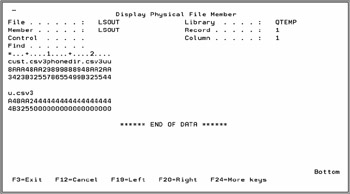 Figure 2.5: Qshell terminates each line of output with a hexadecimal-25 character.

On Unix systems, a process is a running program. The Qshell interpreter is a process. Each utility that is not a built-in command runs in its own process. Scripts run in their own processes, unless they are invoked with the source (dot) utility.

Under Qshell, every process runs in its own job, so the terms process and job are interchangeable.

You can use the Work with Active Jobs (WRKACTJOB) and Work with User Jobs CL command (WRKUSRJOBS) to see which jobs are running. The information returned by the WRKUSRJOB command is shown in Figure 2.6. 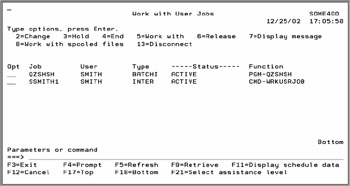 Figure 2.6: The Qshell interpreter runs as a batch immediate job.

If you start a subshell or run a utility, Qshell will start additional jobs as needed. These have the name QP0ZSPWP, as shown in Figure 2.7. 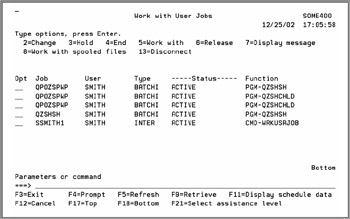 Under V5R2, you can use Qshell's ps (Display Process Status) command to display information about processes. This command is illustrated in Figure 2.8. 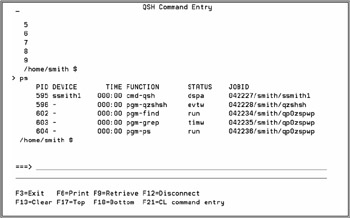 You can speed up processing by using a prestart job, which is a job that begins running when a subsystem is started. When Qshell starts a new process, it will use a prestart job if one is available. This improves performance, because the system does not have to start a new job.

Use the Add Prestart Job Entry (ADDPJE) command to create a prestart job. For example, the following command adds a prestart job to the QINTER subsystem description:

To make Qshell use a prestart job, place a value of Y in the environment variable QSH_USE_PRESTART_JOBS. Use the export command so that child processes will also use prestart jobs:

A good place to put this command is in the /etc/profile special script file, which is discussed in chapter 4.

The Qshell interpreter can run in both interactive and batch environments. In an interactive job, the user can enter commands for immediate execution.

Qshell executes commands in processes, which are implemented as jobs. You can improve the performance of Qshell commands by providing prestart jobs.